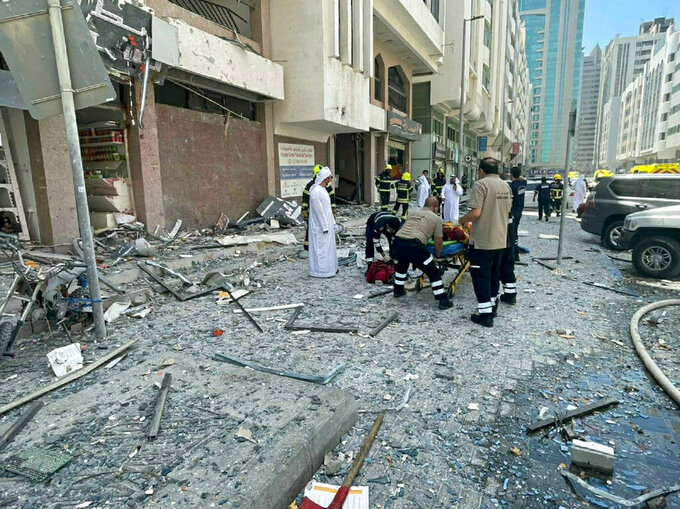 Uncredited, ASSOCIATED PRESS
In this photo released by the Abu Dhabi Police, debris covers the street after an explosion in the Khalidiya district of Abu Dhabi, United Arab Emirates, Monday, May 23, 2022. A gas cylinder explosion in the capital of the United Arab Emirates killed at least two people and injured over a hundred others Monday, police said. (Abu Dhabi Police via AP)

DUBAI, United Arab Emirates (AP) — A gas cylinder explosion in the capital of the United Arab Emirates killed two people and injured 120 others Monday, police said, hours after authorities downplayed the incident and warned the public not to share images of the aftermath.

“The injured were transferred to the hospital to receive necessary health care, with material damage to shops and facades of six buildings,” the police said. They described an investigation into the blast as ongoing.

State-owned and state-linked media in Abu Dhabi also initially downplayed the blast as only damaging the facades of nearby shops in the neighborhood. Abu Dhabi police had warned the public against sharing any footage of the blast's aftermath in the country with strict laws on speech.

Already, authorities have threatened criminal charges against those who broadcast images of attacks on the country following a series of drone attacks on the capital by Yemen's Houthi rebels.

The National, an English-language, state-linked newspaper in Abu Dhabi, described the explosion as striking an unnamed restaurant after 1 p.m. Monday near the Shining Towers complex, a local landmark.

The UAE, a federation of seven desert sheikhdoms on the Arabian Peninsula, does face seasonal fires brought on by the intense heat that bakes this nation each summer. Temperatures hit 34 degrees Celsius (93 degrees Fahrenheit) on Monday.

In February, authorities say a similar gas cylinder explosion struck the capital at the height of concerns over the Houthi attacks.