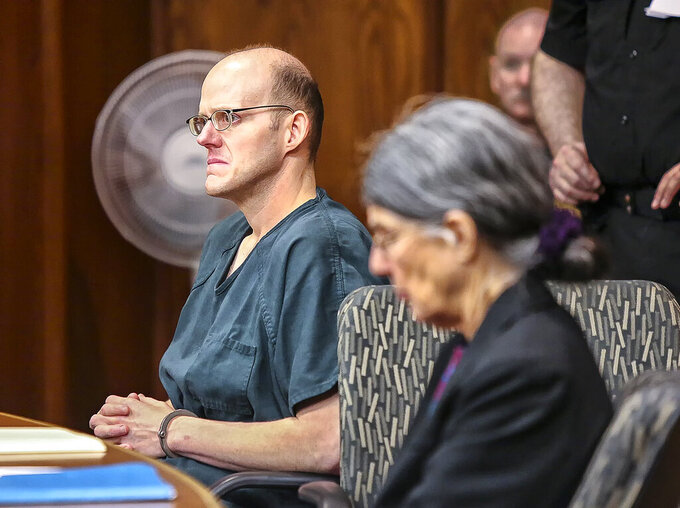 Bill Wagner, ASSOCIATED PRESS
Timothy Haag listens as his attorney gives her opening remarks at the start of his resentencing proceedings in Cowlitz County Superior Court in Longview, Wash., on Jan. 12, 2018. The Washington State Supreme Court on Thursday, Sept. 23, 2021, overturned a 46-year sentence for Haag who killed his friend's little sister when he was 17, finding the punishment focused more on retribution than rehabilitation. Haag, of Longview, was initially sentenced to life without parole for choking and drowning 7-year-old Rachel Dillard in a bathtub in 1994. (Bill Wagner/The Daily News via AP)

SEATTLE (AP) — The Washington state Supreme Court on Thursday overturned a 46-year sentence for a man who killed his friend’s little sister when he was 17, finding the punishment focused more on retribution than rehabilitation.

Timothy Haag of Longview was initially sentenced to life without parole for choking and drowning 7-year-old Rachel Dillard in a bathtub in 1994.

But in 2018, after the U.S. Supreme Court found that automatic life sentences for juveniles were unconstitutional, Haag was resentenced to at least 46 years — a term that could have seen him released at age 63.

The state Supreme Court unanimously ruled that Cowlitz Superior Court Judge Michael Evans failed during resentencing to properly weigh the significant evidence of Haag's rehabilitation behind bars, which included good behavior, a high school diploma, work in the prison chapel and kitchen, and his religious conversion.

Six of the nine justices also said a 46-year sentence for a juvenile is unconstitutional because it amounts to the equivalent of a life sentence, depriving them of a meaningful chance to return to society.

The ruling builds on a steady trend in state and federal courts of recognizing that children must be treated differently from adults when they commit crimes, even heinous ones.

“I had 25 years of conduct the justices could look at that exemplifies what the courts have been saying about how children have a greater capacity for growth and rehabilitation,” Mary Kay High, Haag's appeals lawyer, said Thursday. “They want to make it very clear to trial courts that mitigation is what requires consideration and weight at these hearings.”

In resentencing hearings for people who committed crimes as juveniles, “retributive factors must count for less than mitigating factors,” Justice Helen Whitener wrote in the ruling. “The resentencing court’s inversion of this balance clearly misapplies our statutes and our precedent.”

The court awarded Haag a new sentencing hearing, though the justices did not suggest what might be an appropriate prison term.

Haag had serious social and emotional troubles as a teen. He grew up in poverty, was bullied at school, abandoned by his father, mistreated by his stepfather and struggled with shame over his sexuality and attraction to his friend, Rachel Dillard's half-brother, Alex.

Haag claimed that he killed the girl to punish her family for the way they treated Alex Dillard “like dirt” — including abusing him and forcing him to live in a rat-infested garage. Alex had left the home to escape the abuse, compounding Haag's feelings of abandonment, psychologists testified.

At his resentencing hearing, he asked the judge for leniency. The minimum possible sentence, 25 years, could have seen Haag released less than two years later.

"There is nothing I can say to make up for what I did,” Haag said, according to an account in The Daily News of Longview. “I hate myself for it.”

But Rachel's family vehemently opposed Haag's release. Her mother described how even decades later she continued to lose sleep over her daughter's death, and her father warned the judge of “eternal hellfire” should he help Haag.

In issuing the sentence, Judge Evans noted the difficulty of balancing “a vile, cowardly and particularly heinous multistep strangulation and drowning of a defenseless, 65-pound little girl committed by a 300-pound, 17-year-old young man” with Haag's troubled background, his youthfulness at the time of the killing and his “stellar” track record in prison.

While the high court was unanimous in finding that the judge's decision failed to give enough weight to Haag's rehabilitation, the justices disagreed on another point: whether a 46-year term for a teenager was unconstitutional because it amounted to the equivalent of a life sentence.

Six of the justices said it was. Three others said there was no need to answer that question in Haag's case, with one of them, Justice Debra Stephens, saying 46 years was not necessarily unconstitutional for a teen.