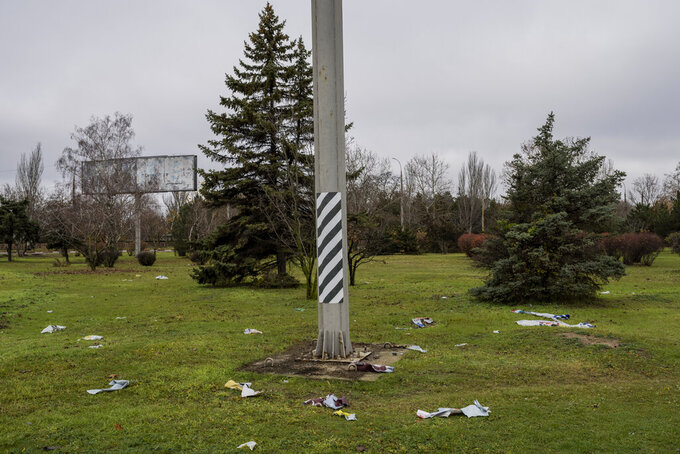 Bernat Armangue, ASSOCIATED PRESS
The remains of a Russian billboard are scattered on the grass at an intersection in Kherson, southern Ukraine, Sunday, Nov. 27, 2022. (AP Photo/Bernat Armangue)

KHERSON, Ukraine (AP) — In the liberated city of Kherson, Ukrainians have been tearing down a glaring symbol of occupation -- billboards spreading Russian propaganda.

Throughout the southern city that was under Russian occupation for nearly nine months, the Russians had put up billboards declaring the city part of Russia or promoting important figures from their past.

This is part of a propaganda war that has been waged over Ukraine in tandem with the one being fought on the battlefield. Moscow has tried to spread its version of history and the ongoing war on social networks, but also in the territories of Ukraine under its control.

Some of the billboards in Kherson referred to World War II, but also to the Kremlin-orchestrated referendums that were held in four regions of Ukraine in September as a pretext for their unlawful annexation by Russia.

Kherson is located in one of the four regions, but Russia lost the city and the surrounding region to Ukraine in November in a major and humiliating defeat.

The city has since experienced power outages and repeated shelling while evidence of atrocities committed during the occupation have emerged. Ukrainian authorities have evacuated some citizens fearing they won't be able to cope because of the damage inflicted on the infrastructure.

Amid the hardship and destruction, the Russian propaganda billboards have fueled anger and resentment. Not even renewed Russian shelling stopped community workers from removing the much-despised pro-Russian messages.

One Russia-installed billboard, for example, featured images of children wearing embroidered Ukrainian T-shirts, the traditional Vyshyvanka, with a digitally-added Russian tricolor flag and slogans like “Russia is here forever” or “Kherson is a Russian city.”

Other billboards had the image of Alexander Suvorov, the Russian Empire's legendary 18th century general, and the caption: “Nature has created only one Russia; it has no rivals.”

Before Ukrainian authorities managed to take them down, some Russian billboards were written over with Ukrainian signs, such as the acronym for the Armed Forces of Ukraine.

Gradually, the pro-Russian messages have been replaced by yellow and blue Ukrainian banners with very different lines: “Kherson, hero city” or “Dear, you are free."

Follow AP's coverage of the War in Ukraine at: https://apnews.com/hub/russia-ukraine