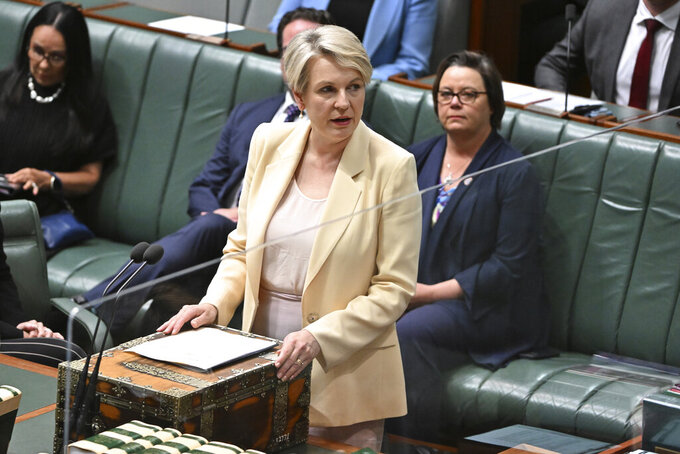 Environment Minister Tanya Plibersek said Rio Tinto acted lawfully in 2020 when it destroyed two rock shelters in Juukan Gorge in Western Australia state that had been inhabited for 46,000 years.

She said Australia’s laws would be updated to prevent such destruction of Indigenous sacred sites happening again.

“It is unthinkable that any culture would knowingly destroy Stonehenge or the Egyptian pyramids or the Lascaux caves in France,” Plibersek told Parliament.

“When the Bamyan Buddhas were destroyed in Afghanistan, the world was rightly outraged. But that’s precisely what occurred in Juukan Gorge,” she added.

Two 1,500-year-old giant Buddhas carved into a cliffside in the Bamyan Valley in Afghanistan were destroyed by the Taliban in 2001 because the statues were considered to be idols.

Rio Tinto demolished the caves, which contained artifacts tens of thousands of years old, to gain the cheapest possible access to iron ore reserves. The Anglo-Australian company's chairman, CEO and two other executives lost their jobs following outrage over the destruction.

Plibersek committed her government to draft new laws with the First Nations Heritage Protection Alliance, a group of 30 Indigenous organizations, to better protect their cultural heritage.

Her center-left Labor Party government, which replaced the previous conservative administration at elections in May, also responded to an interim and final report of a parliamentary inquiry into the Juukan Gorge destruction.

Jamie Lowe, chief executive of the National Native Title Council, which represents Australia’s traditional owners of the land, welcomed the government’s promised changes, which he said were long overdue.

“The disaster and the destruction and the act of violence to Juukan Gorge and the PKKP people some two years ago was something that happens to our people on a regular basis and the need for comprehensive national reform is something that has been a priority for our people for decades now,” Lowe told Australian Broadcasting Corp., referring to the Puutu Kunti Kurrama and Pinikura people, the gorge’s traditional owners.

The PKKR Aboriginal Corp. said the traditional owners of the demolished caves had not been respected or adequately consulted by the government. “We would have expected the minister would want to meet with us before making a public announcement about our country and cultural heritage,” Corp. chairman Burchell Hayes said in a statement.