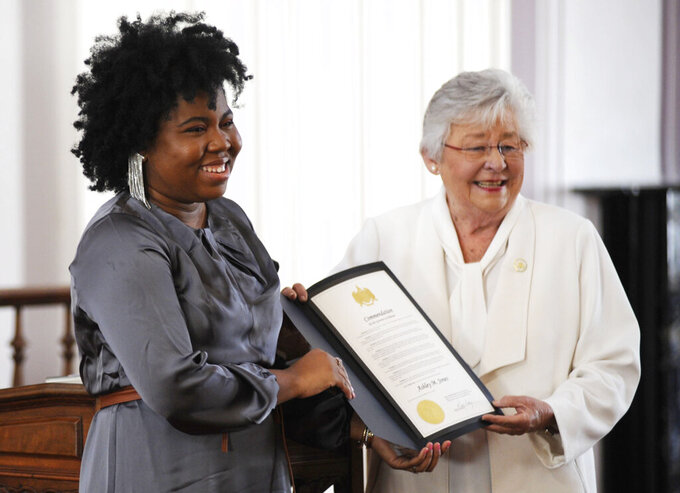 Jay Reeves, ASSOCIATED PRESS
Alabama Gov. Kay Ivey presents a commendation to the state's first Black poet laureate, Ashley M. Jones, during a ceremony at the Capitol in Montgomery, Ala., on Wednesday, Dec. 1, 2021. Jones, a creative writing teacher from Birmingham, delves into the pain and difficulty of being Black in America. Her most recent book is a collection of poems titled "Reparations Now!" (AP Photo/Jay Reeves)

MONTGOMERY, Ala. (AP) — Alabama Gov. Kay Ivey recognized the state's first Black poet laureate, a creative writing teacher who delves into inequality and the difficulty of being Black in America, on Wednesday in the same building where Southern delegates voted to form the Confederacy 160 years ago.

Standing in the white-domed Capitol, the Republican Ivey presented Ashley M. Jones with a commendation for the honor, bestowed earlier this year by the Alabama Writers Cooperative for a four-year term that begins in January.

“Everyone in this room, and I would add folks around the country, are proud of you for being honored with this well-deserved, historic recognition,” Ivey told Jones during a ceremony.

As poet laureate, Jones will advocate for poetry and writing in general during lectures and appearances at schools, libraries and other institutions. “I am committed to making space for all of us who write,” she said.

Jones' most recent book, released earlier this year, is a collection of poems titled “Reparations Now!” In it, she writes about reparations not just in terms of money but in the fuller sense of rebuilding a society fractured by generations of racial violence, division and prejudice.

Jones, in an interview, said she believes both poetry and history should tell the truth.

“I’m hoping that through my position I can continue to spread that message and show that when we actually confront the truth it’s good for everyone. Hiding things doesn’t help at all. It actually hurts more than it helps,” she said.

“She brings a strong statement, but she brings a lot of balance,” said Thompson. “And so I think that she will have things to say that people will hear.”

Jones' recent book includes the poem “Reparations Now, Reparations Tomorrow, Reparations Forever,” in which she takes off on the infamous “segregation now” inaugural speech by four-term Alabama Gov. George C. Wallace to talk about the depth of pain of Black people and ponders what could ever be a salve. It says, in part:

“What, you think all I want is money? What, you think money can ever repay what you stole? Give me land, give me all the blood you ripped out of our backs, our veins. Give me every snapped neck and the noose you wove to hoist the body up.

Such words are challenging in a conservative state that’s still trying to remove racist language from a Constitution passed in 1901 to protect the political power of white people. Earlier this year, the GOP-controlled State Board of Education passed a resolution banning the teaching of critical race theory, an academic term that conservative opponents contend amounts to making white people feel bad about the racism of past generations.

“We have permanently BANNED Critical Race Theory in Alabama. We’re focused on teaching our children how to read and write, not HATE,” Ivey said in a tweet in October.

Jones teaches at the Alabama School of Fine Arts, which she also attended. She said receiving such an honor in a deeply conservative state was gratifying but not terribly surprising since Alabama's writing community, like those elsewhere, is generally more progressive than the general population.

“The artists always are on a different pulse,” she said.