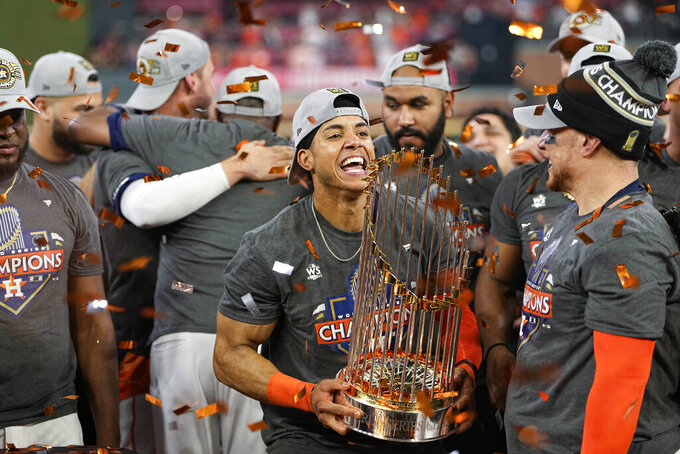 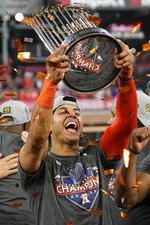 Capping a freshman season like no other, he became the first rookie position player to win a World Series MVP award Saturday night after hitting .400 in the Houston Astros’ six-game victory over the Philadelphia Phillies.

“The hardest part was just blocking everything that’s not part of the game,” Peña said. “There’s a saying that you can’t sink a ship with water around. It sinks if water gets inside. So I just try to stay strong and keep the water outside my head.”

Peña also won a Gold Glove and was the AL Championship Series MVP. The 25-year-old shortstop became the first hitter to win those three prizes in a career, according to OptaSTATS — and he did it all in his rookie season.

“It has a lot to do with my family, my upbringing,” he said.

“Dusty Baker’s a legend in the sport,” Jeremy Peña said. “Not just because he’s been around. He’s had success at this game. He brings the best out of his players. He gives you the confidence to just go out and play hard and let the game take care of itself."

Peña singled to chase Phillies starter Zack Wheeler in Game 6, giving the Astros two baserunners for the first time. Yordan Alvarez followed with a go-ahead, three-run homer that sent Houston to a 4-1 victory.

Peña finished the postseason with a .345 batting average, four homers, eight RBIs and a 1.005 OPS. He also became the first rookie shortstop to win a Gold Glove, as well as the first to homer in the World Series.

Just 24 when he was handed the starting job at the beginning of the season after Carlos Correa left as a free agent, Peña became the third rookie at any position to earn World Series MVP, joining a pair of right-handed pitchers: the Los Angeles Dodgers’ Larry Sherry in 1959 and Miami’s Liván Hernández in 1997.

Peña's 18th-inning homer completed a Division Series sweep at Seattle and he hit a go-ahead drive off Noah Syndergaard in Game 5 of the World Series. His Game 2 jersey is headed to the Hall of Fame.

“You have to make tough decisions in this job, and Jeremy’s making it look like it was an easy decision, and it wasn’t,” Houston general manager James Click said. “Carlos is a great player, and he’s been a huge part of this franchise. But to do what Jeremy did, to step in and elevate his game in the playoffs, it just speaks to his hard work, his character and the talent that he has. There’s not that many special guys on the planet that can do what he just did.”

Peña became the ninth player to win MVP of a League Championship Series and the World Series in the same season. He batted .353 with two homers and four RBIs against the Yankees in the ALCS.

The only other player to win an LCS MVP award, World Series MVP and a Gold Glove during their career was pitcher Orel Hershiser, who took all three prizes with the Dodgers in 1988.

Peña hit .291 with 22 homers and 63 RBIs during the regular season and likely will finish high in AL Rookie of the Year voting. Seattle outfielder Julio Rodríguez is the favorite.

Peña thought back to last year's Game 6 loss to Atlanta at Minute Maid Park, where he joined the Astros but was inactive.

“These guys were left with a bitter taste in their mouth last year,” he said. “Me being in the dugout last year, I didn’t want to experience that again.”