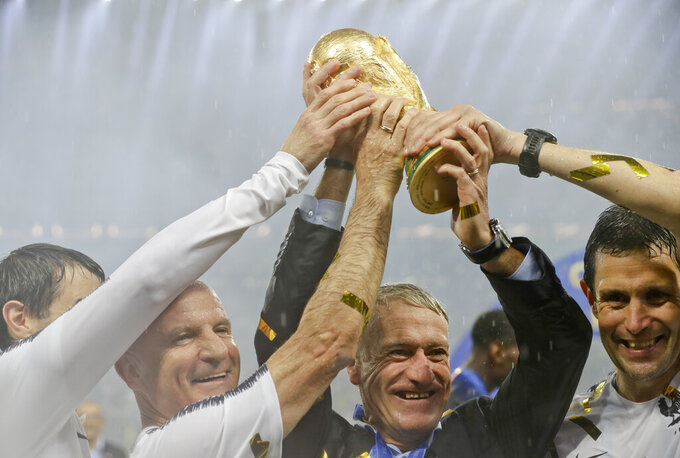 PARIS (AP) — As well as coping with injuries to key players again, France has the weight of World Cup history to contend with in Qatar.

Not since Brazil lost the 1998 final to France has the defending champion come close to retaining the title.

Of the next five World Cup defending champions, four failed to reach the knockout stage and three finished last in their group.

As World Cup champions in 1998, many favored France to win again in 2002, especially with the front line featuring top scorers from three major European leagues.

France boasted Arsenal striker Thierry Henry, Juventus marksman David Trezeguet and rising talent Djibril Cisse in a glittering attack blending speed, skill and power. But the French flopped and, with an injured Zinedine Zidane unable to perform properly in midfield, limped out of the group stage without winning a game.

It was one of the greatest shocks in World Cup history, and the warning signs are chillingly similar this time.

Defending champion France boasts arguably the best attack in the world with Ballon d’Or winner Karim Benzema alongside 2018 World Cup star Kylian Mbappe, with either Antoine Griezmann or Olivier Giroud to support them.

But, like in 2002, France also has problems in midfield, with World Cup winners Paul Pogba and N’Golo Kante both out injured, depriving coach Didier Deschamps of his engine room. Central defender Raphael Varane, another mainstay from four years ago, is trying to recover from a hamstring injury.

What could go wrong for a France team with Zidane playing behind Henry, Trezeguet and Cisse in a group featuring Senegal, Uruguay and Denmark?

The first mistake coach Roger Lemerre made was picking Zidane in a warmup against South Korea five days before the tournament. He limped off with a thigh injury that ruled him out of the first two group games, and he was rushed back for the last.

France, however, still had the core of its victorious team from 1998. Youri Djorkaeff was in the midfield alongside Patrick Vieira, who had just won the Premier League and FA Cup double with Arsenal teammate Henry. There was also Emmanuel Petit, who had scored in the 3-0 win over Brazil in the last final.

But in the opening match of 2002, Papa Bouba Diop scored the lone goal for Senegal in a 1-0 win over the defending champions.

France’s hopes of bouncing back took a hit when Henry was sent off after 25 minutes for a reckless challenge in a 0-0 draw against Uruguay.

That left France needing to beat Denmark by two goals. A strapped-up Zidane did what he could but France lost 2-0 and went home in embarrassment.

Brazil boasted a team packed with stars, featuring the showboating brilliance of Ronaldinho; the sharp-shooting of Ronaldo and Adriano; the marauding runs of Cafu, and the swirling long-range free kicks of Juninho. Ronaldinho even had a personalized headband with his own initial “R” written in gold.

There was a sense that Brazil might be a little overconfident in the quarterfinals against a France team featuring a rejuvenated Zidane.

And that's the way it turned out.

Zidane produced one of the most dazzling midfield performances in World Cup history. His incredible skill, balletic balance and pirouetting moves bamboozled Brazil, and his free kick set up Henry for a volley — the only goal of the match.

Just like France in 2002, Italy finished at the bottom of its group.

At least the Italians scored — four times — but the group looked a bit easier: Paraguay, New Zealand and Slovakia.

Italy made a poor start and needed an equalizer from midfielder Daniele De Rossi to get a draw against Paraguay. Worse followed for the four-time champions: a 1-1 draw with New Zealand, which took an early lead through unheralded forward Shane Smeltz. In the final group game, Italy was in tatters and trailed 2-0 against Slovakia before losing 3-2.

Italy coach Marcello Lippi just couldn’t seem to get the balance right, unlike in 2006. His team conceded too easily even with Fabio Cannavaro and Giorgio Chiellini in central defense, and had problems up front. Vincenzo Iaquinta, Antonio Di Natale and Fabio Quagliarella did score but first-choice striker Alberto Gilardino failed to.

Gilardino had been in good form with AC Milan that season and was known for a peculiar goal celebration, sinking to his knees to play the violin.

This time, Gilardino had nothing to celebrate.

It was quite the rude awakening for Spain coach Vicente del Bosque after back-to-back major trophies.

European champion Spain’s opening game ended in a 5-1 loss to the Netherlands — despite a tough central defensive pairing of Sergio Ramos and Gerard Pique and a slick midfield including Barcelona greats Xavi Hernandez and Andres Iniesta.

In the next game, Spain was unable to stop conceding and lost to Chile 2-0 with both goals coming in the first half.

A 3-0 win over Australia was scant consolation for a star-studded Spain team, whose slide symbolized how two golden eras were coming to an end. Barcelona’s glory years, which centered around the passing of Xavi and Iniesta, coincided with Spain’s successes at Euro 2008, the 2010 World Cup and Euro 2012.

So much for ruthless Germany, the attacking machine that put seven goals past Brazil in the semifinals at the previous World Cup on the way to its fourth title.

From the outset, Germany struggled in Russia, losing a scrappy game 1-0 to Mexico and then needing a goal from midfielder Toni Kroos in the fifth minute of injury time to beat Sweden.

That should have been enough of a wake-up call.

Germany needed to beat South Korea to have a shot at advancing, but instead conceded two goals deep in stoppage time after squandering many chances to score.

The loss was met with disbelief back home, a feeling familiar to that star-studded France team 20 years ago.