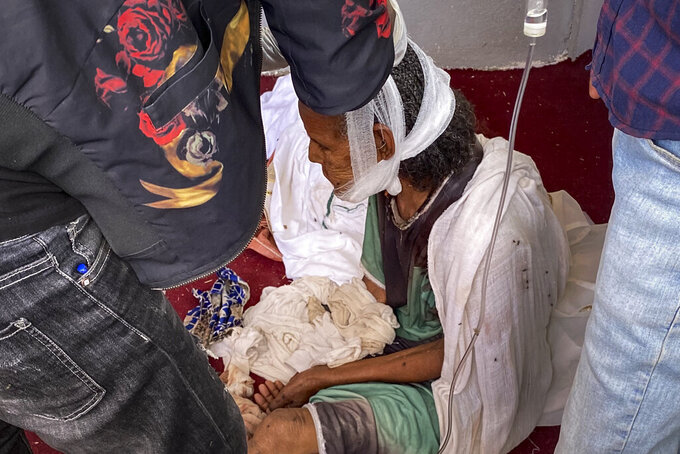 Uncredited, ASSOCIATED PRESS
FILE - In this Monday, Nov. 30, 2020 file photo, an elderly woman who fled from the town of Shire to the city of Axum to seek safety, but was then wounded in the jaw during an attack on the city, sits with her head bandaged before dying of her injuries days later, in Axum, in the Tigray region of Ethiopia. A new Amnesty International report issued Friday, Feb. 26, 2021 says soldiers from Eritrea systematically killed "many hundreds" of people, the large majority men, in a massacre in late November 2020 in the Ethiopian city of Axum. (AP Photo/File) 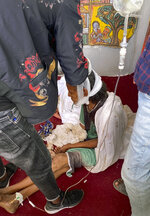 NAIROBI, Kenya (AP) — Soldiers from Eritrea systematically killed “many hundreds” of people, the large majority men, in a massacre late November in the Ethiopian city of Axum in the Tigray region, Amnesty International said Friday. The new report echoed the findings of an Associated Press story last week and cited more than 40 witnesses.

As pressure on Ethiopia increased over what might be the deadliest massacre of the Tigray conflict, the prime minister’s office announced that “humanitarian agencies have now been provided unfettered access to aid in the region.” It added that the government “welcomes international technical assistance to undertake the investigations (into alleged abuses) as well as invites the potential to collaborate on joint investigations.”

And yet the government alleged the Amnesty report relied on “scanty information," and said the human rights group should have visited the Tigray region. Amnesty said it requested permission from the government in December and never received a response.

“As you know, no independent human rights monitors have been allowed in the region since the conflict began,” spokesman Conor Fortune said in an email to the AP.

Crucially, the head of the government-established Ethiopian Human Rights Commission, Daniel Bekele, says the Amnesty findings “should be taken very seriously.” The commission's own preliminary findings “indicate the killing of an as yet unknown number of civilians by Eritrean soldiers” in Axum, its statement said.

The Amnesty report describes the soldiers gunning down civilians as they fled, lining up men and shooting them in the back, rounding up “hundreds, if not thousands” of men for beatings and refusing to allow those grieving to bury the dead.

Over a period of about 24 hours, “Eritrean soldiers deliberately shot civilians on the street and carried out systematic house-to-house searches, extrajudicially executing men and boys," the report released early Friday says. "The massacre was carried out in retaliation for an earlier attack by a small number of local militiamen, joined by local residents armed with sticks and stones.”

The “mass execution” of Axum civilians by Eritrean troops may amount to crimes against humanity, the report says, and it calls for a United Nations-led international investigation and full access to Tigray for human rights groups, journalists and humanitarian workers. The region has been largely cut off since fighting began in early November.

Ethiopia’s federal government has denied the presence of soldiers from neighboring Eritrea, long an enemy of the Tigray region’s now-fugitive leaders, and Eritrea’s government dismissed the AP story on the Axum massacre as “outrageous lies.” Eritrea's information minister, Yemane Gebremeskel, on Friday said his country “is outraged and categorically rejects the preposterous accusations” in the Amnesty report.

But even senior members of the Ethiopia-appointed interim government in Tigray have acknowledged the Eritrean soldiers’ presence and allegations of widespread looting and killing.

Ethiopia said the “alleged incident” in Axum “will have to be thoroughly investigated.”

And Ethiopia's ambassador to Belgium, Hirut Zemene, told a webinar on Thursday that the alleged massacre in November was a “very highly unlikely scenario” and “we suspect it's a very, very crazy idea.”

No one knows how many thousands of civilians have been killed in the conflict between Ethiopian and allied forces and those of the Tigray regional government, which had long dominated Ethiopia’s government before Prime Minister Abiy Ahmed took office in 2018. Humanitarian officials have warned that a growing number of people might be starving to death as access, while improving, remains restricted.

“Hostilities must cease immediately,” the European Union foreign policy chief Josep Borrell said in a statement in response to the Amnesty International report, adding that “the level of suffering endured by civilians, including children, is appalling."

The presence of Eritrean soldiers in Tigray has brought some alarm. The United States has repeatedly urged Eritrea to withdraw its soldiers and cited credible reports of “grave” human rights abuses. On Wednesday it asked, “Does the Eritrean military have sufficient control over its troops to prevent them from committing human rights abuses?”

Witnesses of the massacre in Axum told Amnesty International that Ethiopian and Eritrean soldiers jointly took control of the city but the Eritreans carried out the killings and then conducted house-to-house raids for men and teenage boys.

Bodies were left strewn in the streets after the events of Nov. 28 and 29, witnesses said.

“The next day, they did not allow us to pick the dead. The Eritrean soldiers said you cannot bury the dead before our dead soldiers are buried,” one woman told Amnesty International. With hospitals looted or health workers having fled, some witnesses said a number of people died from their wounds because of lack of care.

“Gathering the bodies and carrying out the funerals took days. Most of the dead appear to have been buried on 30 November, but witnesses said that people found many additional bodies in the days that followed,” the new report says.

After obtaining permission from Ethiopian soldiers to bury the dead, witnesses said they feared the killings would resume any moment, even as they piled bodies onto horse-drawn carts and took them to churches for burial, at times in mass graves.

The AP spoke with a deacon at one church, the Church of St. Mary of Zion, who said he helped count the bodies, gathered victims’ identity cards and assisted with burials. He believes some 800 people were killed that weekend around the city.

After being left exposed for a day or more, the bodies had begun to rot, further traumatizing families and those who gathered to help.