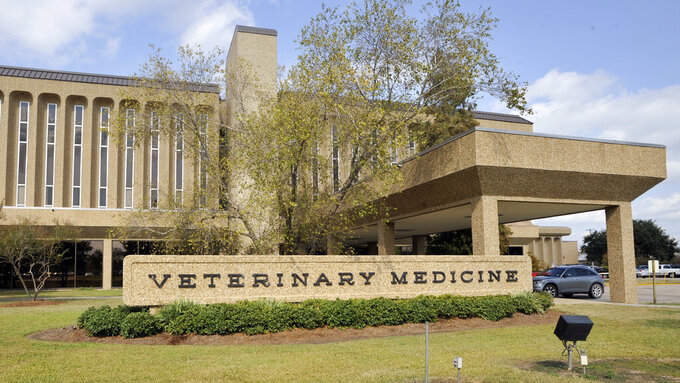 Bill Feig, ASSOCIATED PRESS
This Oct. 10, 2010 photo shows LSU Exterior of the LSU School of Veterinary Medicine in Baton Rouge, La. Forty years after he graduated, Dr. George Robinson III has given a major gift to the LSU vet school, as part of an effort to increase the number of Black veterinarians. The scholarship for Black students covers all of the costs of attending. The first student to receive the scholarship, Amber Fairley, will start next month. (Bill Feig/The Advocate via AP)

BATON ROUGE, La. (AP) — When he was a teenager, Dr. George Robinson III said he was lucky to come into contact with Dr. Clyde Raby, a Black veterinarian who practiced in Baton Rouge.

“He allowed me to come over to his practice, and I liked it,” Robinson said. That led him to decide he wanted to become a vet when he was 14 and to a career that took him from LSU’s veterinary school to a private veterinary practice in New Orleans and later as an executive with a number of national veterinary chains. That culminated in 2016 with Robinson joining with a private equity group to launch Heartland Veterinary Partners, which manages business operations at more than 150 clinics across the U.S.

An interest in being a vet ran in the family. His father, George Robinson, the former dean of the Southern University College of Agriculture, wanted to be a vet but didn’t get a chance to.

“How many kids have that opportunity in the African American community?” said Robinson, a north Baton Rouge native who now lives in Florida and is grateful for his encounter with Raby. “You have to have that outreach.”

Robinson earned a bachelor’s degree in animal science from Southern and was admitted to LSU School of Veterinary Medicine when he was 19. He was the first Black Louisiana resident to go to the school. Forty years after he graduated, Robinson has given a major gift to the LSU vet school, as part of an effort to increase the number of Black veterinarians. The scholarship for Black students covers all of the costs of attending. The first student to receive the scholarship, Amber Fairley, will start next month.

“I appreciate the effort Dr. Robinson is doing to recruit minority students,” Fairley said. “I can come to LSU and focus on training and studying and not worry about how much debt I’m going to be in when I graduate.”

Veterinary sciences has not done a good job of recruiting Black students, Robinson said. He said a veterinarian is “the Whitest profession in America,” and the numbers back him up. According to the U.S. Bureau of Labor Statistics, Black people make up less than 1% of the vets in the country. LSU said of the 1,448 students who have been admitted into the vet school over the past 14 years, 28 were Black, an average of 1.9%.

“People are not exposed to African American veterinarians,” Robinson said. “They’re not in the forefront of their thoughts. ... Veterinary medicine has not made an outreach to tell these people ‘We want you to be a part of our profession.’”

Over the years, Robinson has donated more than $650,000 to the LSU vet school. While Robinson’s scholarship is a “transformational type of gift,” it pales in comparison to the fact that he has been so willing to give up his time to serve as a role model and mentor to LSU veterinary students, said Dr. Joseph Taboada, who served as an associate dean at the LSU vet school for about 20 years.

Robinson has been a tremendous role model for students because of his varied background in the veterinary profession, said Taboada, who met Robinson in 1988, when he started teaching at the vet school.

After graduating in 1981, Robinson went to work with a private practice in New Orleans. He left that job after less than a year.

“I was sitting at home and one of my good clients called me and said, ‘Are you going to take care of my dog or what?’,” Robinson said. That motivated him to start his own veterinary practice, one which featured house calls.

Robinson operated veterinary clinics in New Orleans from 1983 to 2002. He learned the basics of operating a business and how to manage relationships. But he said maintaining a work-life balance was difficult. “When I first started, I thought 70-hour weeks were the way to go,” he said. Along with his practice, Robinson had other community interests, such as serving on the New Orleans City Planning Commission, the Southern University System Board and making a couple of runs for a state House seat in New Orleans East.

But all of that activity caught up with Robinson, and he developed burnout. He sold his practice, moved to Atlanta and took a job with a veterinary group. “I wanted a break,” he said.

Robinson enjoyed working as part of a veterinary group and just taking care of animals. After a couple of years, he left the practice and moved to Florida as part of a noncompete clause. While he was in Florida, he started working for Banfield Pet Hospital, a national chain of clinics and quickly moved into management. “My path accelerated tremendously,” he said.

“I got my MBA from the school of hard knocks,” he said. “I was hungry for information, and I would just go to the source.”

In 2011, Robinson left Banfield and became director of divisional operations for National Veterinary Associates, a group of 500 hospitals and 1,000 veterinarians.

His years working with corporate veterinary groups and managing multiple clinics and his experience as a veterinarian with a single practice gave Robinson a perspective on how to best manage operations. “I wanted to do it my way, to build a better mousetrap,” he said. This led him to found Heartland.

Heartland handles all of the backroom business operations that many veterinarians don’t like to do, such as payroll, managing finances and scheduling. This frees vets to concentrate on taking care of animals. “We’re vet-centric; we don’t interfere with clinical autonomy,” he said.

Heartland doesn’t rebrand the clinics it owns and allows veterinarians to determine if they want to get a salary or be paid on a production basis. “Setting up a veterinary practice is like having a baby, and one baby is different from another baby,” Robinson said. “We don’t have a cookie-cutter approach.”

After helping Heartland grow to more than 150 clinics and post over $200 million in revenue over a five-year period, Robinson sold the company to a San Francisco-based investment group in 2020.

Robinson now serves as vice chairman of Heartland’s board of directors. He serves as a consultant to vet practices and makes frequent visits to vet schools, talking to students about financial issues.

“People need to understand that being a veterinarian is a business,” he said. “You’ve got to get paid.”