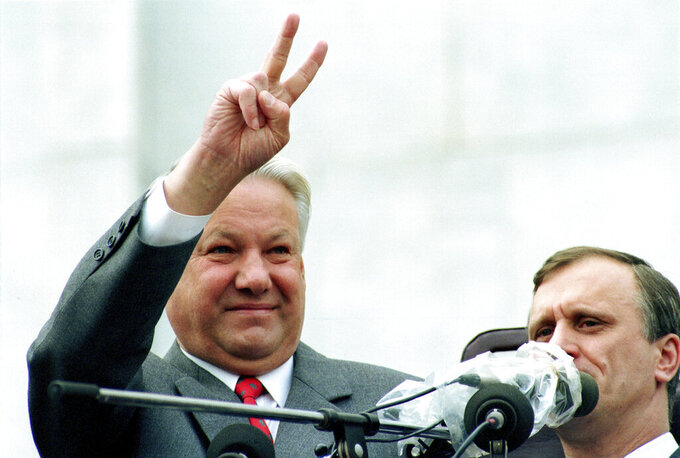 Boris Yurchenko, ASSOCIATED PRESS
FILE - In this Thursday, Aug. 22, 1991 file photo, Russian Republic President Boris Yeltsin makes a V-sign to thousands of Muscovites during a rally in front of the Russian federation building to celebrate the failed military coup in Moscow, Russia. In the capital, where thousands of protesters confronted soldiers on tanks and armed personnel carriers, Yeltsin climbed atop one military vehicle and urged the Russian people to fight back with an immediate general strike. (AP Photo/Boris Yurchenko, File) 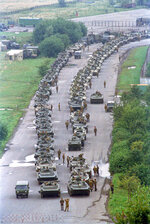 In August 1991, a group of hard-line Communist Party officials tried to remove Soviet leader Mikhail Gorbachev from power. The move sent shock waves around the world, which feared a rollback of Gorbachev’s reforms and his efforts to end the Cold War. The putsch collapsed in three days as throngs took to the streets of Moscow in defiance. The events dramatically weakened Gorbachev’s rule and precipitated the collapse of the 74-year-old Soviet Union about four months later.

MOSCOW (AP) — Communist hard-liners backed by tanks and troops seized power today from President Mikhail S. Gorbachev in a coup that threatened the reforms he used for six years to transform the Soviet Union and end the Cold War.

Vice President Gennady Yanayev said he was taking over as acting president under a state of emergency, supported by an eight-member committee that includes the KGB and top military and police officials.

Gorbachev was detained at his vacation home in the Crimea, said a spokesman for Boris Yeltsin, president of the Russian republic.

Yeltsin quickly moved into the forefront of resistance to the takeover. He ordered Soviet soldiers, police and KGB agents to follow his command on the territory of the sprawling Russian republic, which includes Moscow.

In the capital, where thousands of protesters confronted soldiers on tanks and armed personnel carriers, Yeltsin climbed atop one military vehicle and urged the Russian people to fight back with an immediate general strike.

“I’m not going to order my troops to shoot Boris Yeltsin,” one military commander was quoted as saying.

It was unclear if the confrontations would lead to large-scale resistance to the coup.

No injuries or deaths were immediately reported in the protests.

Late today, the official Soviet news agency Tass reported Yeltsin’s condemnation of the coup and his call for a general strike, a move that may reflect feuding between pro- and anti-coup factions at the agency.

Yeltsin also received support from leaders of the republics of Kazakhstan and the Ukraine.

As President Bush joined other Western leaders in condemning the coup, there were also reports of a new crackdown in the breakaway Baltic republics.

Yanayev (pronounced yah-NEYE-yeff), at his first post-coup news conference, denounced the Yeltsin-led resistance as “dangerous and irresponsible ... fraught with the potential of armed conflict.”

But he added: “We will do our utmost not to use force against civilians.” Yanayev claimed that Gorbachev “is now on vacation” in an undisclosed “safe place.”

“He is very tired after all these years, and he will need some time to get better. We hope … he will take office again,” he told reporters.

The emergency decree announcing the takeover early today had said Gorbachev, 60, was unable to perform his duties for health reasons. However, there has been no recent indication he was ill.

Gorbachev was to have returned to Moscow today for Tuesday’s signing of a treaty, opposed by hard-liners, that would have given the restive republics more power at the expense of the Communist central government.

The vehicles later backed off several hundred yards and the intervening space filled with hundreds of pro-Yeltsin demonstrators. They used barricades of trucks, buses and bricks to protect the building and Yeltsin inside.

Late in the afternoon, most of the armored vehicles around the Russian headquarters had left.

Russian deputies reported that 38,000 copies of Yeltsin’s appeal to the people of Russia have been printed up and were being distributed at airports and train stations.

More than a hundred members of the Russian legislature gathered at the Russian Parliament and decided to split up into groups and talk to soldiers throughout Moscow, hoping to persuade them not to support the coup.

In the rain-soaked streets of central Moscow, many of the protesters engaged in shouting matches with Soviet soldiers.

“We won’t stand for it!” cried Muscovite Alexander Muzhin.

“It’s our army. They will support us,” said Gasha Kolchin, a 20-year-old medical student at Moscow State University, as he rode on a tank in a downtown street, clutching a red-white-and-blue, pre-revolutionary Russian flag.

“We are not afraid. We are sure that democracy will win in our country,” he said.

President Bush, who cut short a Maine vacation to return to Washington, put aid to the Soviet Union on hold and urged Western allies to do likewise. He was highly critical of the overthrow of Gorbachev “by a very hard-line group,” saying it violated the Soviet Constitution.

“Coups can fail,” Bush said. “What hasn’t been heard from yet is the people of the Soviet Union.”

Western leaders said they expected Moscow to honor international commitments in arms control and other matters. Bush and Gorbachev signed a historic Strategic Arms Control Treaty on the reduction of nuclear weapons only weeks ago.

Reports said some internal airports around the country were being closed, although airlines said operations were apparently normal at Moscow’s international airport.

Military action was reported in other Soviet republics. The Soviet military commander of the Baltics informed the governments of the three republics he was assuming control and they faced arrest if they resisted, Latvian officials said.

“If needed, I will put my head on the block because we can’t retreat,” said Estonian President Arnold Ruutel.

Former Foreign Minister Eduard Shevardnadze, a key architect of Gorbachev’s reform-minded international policies, said the West should move to back reformers in the Soviet Union.

“The West should show its solidarity with reform movements in the country. What is happening now is a tragedy for the West, for the Soviet Union and for the East as well,” he told The Associated Press.

Some independent Soviet media were silenced, and word of the takeover came from official outlets, such as the Tass news agency.

The new ruling committee announced it assumed emergency powers at 6 a.m. today (11 p.m. EDT Sunday). Yanayev, who took over as acting president, said the changes were temporary and did not mean a renunciation of reforms or affect the Soviet Union’s international commitments.

Even so, the takeover threw into question Gorbachev’s policies of creating a free-market economy, granting autonomy to the nation’s republics and carrying out arms control agreements with the United States.

It was unclear if Yanayev, 53, a little-known provincial official when Gorbachev chose him as his deputy in December, held the main power or if he was merely a figurehead.

The decree banned disruptive demonstrations and strikes and said disobedient elected officials and political parties would be suspended. It said a committee would be created to establish control over the media and that a curfew may be necessary.

The new Union Treaty that Gorbachev was to have signed Tuesday was opposed by hard-liners, who said it would effectively hobble the central government’s power and transfer authority to the republics. The hard-liners said that the 15 republics would be subject to national laws.

Sources said the overthrow had been in the works since Friday. That day, a former Gorbachev aide and reformer, Alexander Yakovlev, had said publicly that Stalinist hard-liners were plotting a coup. He also resigned from the party.

The hard-liners also moved against reformists outside Moscow. Announcers on Leningrad television read the Tass announcement and said Leningrad’s reformist mayor, Anatoly Sobchak, had been removed from office.