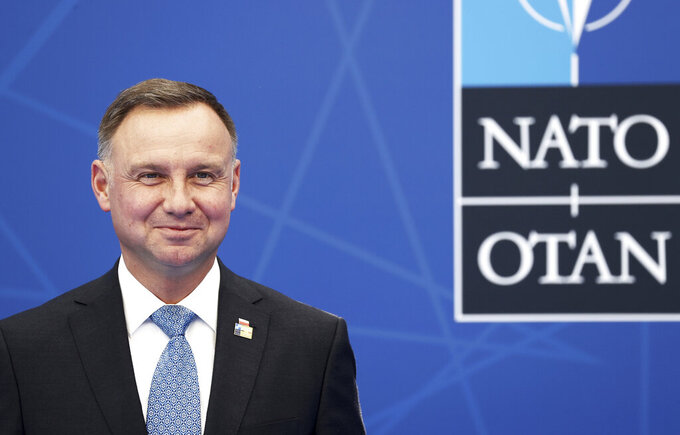 Kenzo Tribouillard, ASSOCIATED PRESS
FILE - In this Monday, June 14, 2021 file photo, Poland's President Andrej Duda arrives for a NATO summit at NATO headquarters in Brussels. Poland’s President Andrzej Duda said Friday July 30, 2021, he sees the need for changes to his country's law on disciplining judges, in a significant shift in tone on an issue that has brought a tense and drawn-out spat with European Union authorities. (Kenzo Tribouillard/Pool via AP, File)

WARSAW, Poland (AP) — Poland’s President Andrzej Duda said Friday he sees the need for changes to his country's law on disciplining judges, in a significant shift in tone on an issue that has brought a tense and drawn-out spat with European Union authorities.

Duda was commenting on letters from the head of Poland’s top court appealing to him and other senior figures to initiate changes that would remove flaws in Polish legislation and bring it into line with EU law.

Duda told state agency PAP that he agreed with the court president and that “everything indicates that legislative changes will be needed.”

He insisted on the importance of a system of disciplining judges, but said the judges should be confident that it is “really transparent, fair and honest.”

His words struck a different tone from government's insistence in recent years that the disciplinary procedures were only for the good of the judiciary and that the EU had no say on the organization of Poland's or any other EU member's justice system.

Four letters written to Duda, to Prime Minister Mateusz Morawiecki and to the speakers of the two parliament chambers by the Supreme Court's first president, Judge Malgorzata Manowska, asking for changes to the law, were published on the court's website Friday.

The EU Court of Justice said earlier this month that the way Poland is disciplining its judges undermines judicial independence and contravenes EU law, because it is politicized. Poland joined the EU in 2004.

It has told Poland's government, which drew up the regulations, to immediately suspend the disciplinary body at the Supreme Court and introduce changes, under threat of financial and other sanctions.

Adding to the growing conflict with the EU over Poland's rule of law and organization of the judiciary, the government has ignored the injunctions, arguing it has sole responsibility for the justice system.

In her letters government loyalist Manowska appealed for “swift but first of all well-thought-through changes to the law” that would remove the flaws and bring it into line with European law.

The four figures have the powers to propose and enact legislation.

Manowska appealed to them to protect the “common good that is Poland” and said that the judicial dispute with the EU has paralyzed disciplinary proceedings.

Earlier this week, 47 of the Supreme Court judges, along with thousands of other judges and prosecutors, have signed an appeal for the government to heed the EU court's rulings and immediately suspend the Disciplinary Chamber.

Under the right-wing government that won power in 2015, Poland has been in an intensifying dispute with the EU as the government asserts more political control over the nation’s judicial system and judicial appointments.

Poland’s Constitutional Court ruled last week that that temporary injunctions issued by the EU court regarding the national judiciary were nonbinding. One of them was an injunction for the suspension of the body disciplining high judges.

However, Prime Minister Mateusz Morawiecki said last week that he would not exclude the possibility of a review of the Disciplinary Chamber, saying it has not met all the expectations placed in it. Days earlier, he met with the head of the EU Council, Ursula von der Leyen, for talks that included Poland's judiciary.

A number of Poland's judges critical of the right-wing government have been suspended under the disciplining procedure, but the suspensions have been declared illegal by some lower courts, who questioned the authority of the disputed disciplinary body.