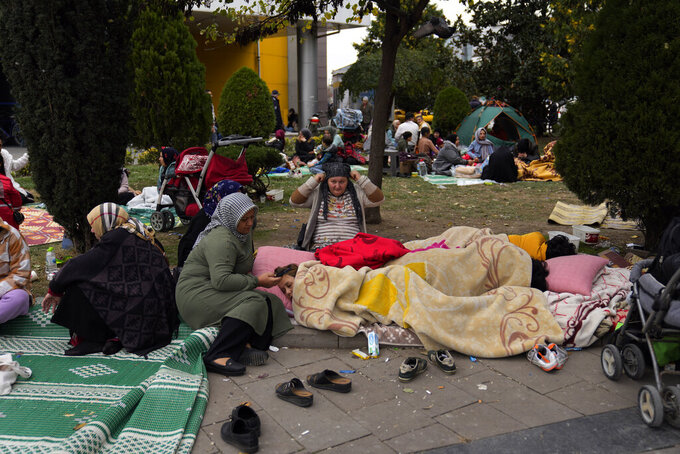 Khalil Hamra, ASSOCIATED PRESS
People rest outside their homes in Duzce, Turkey, Wednesday, Nov. 23, 2022, after a magnitude 5.9 earthquake hit a town in northwest Turkey early Wednesday, causing damage to some buildings and widespread panic. At least 68 people were injured, mostly while trying to flee homes. The earthquake was centered in the town of Golkaya, in Duzce province, some 200 kilometers (125 miles) east of Istanbul, the Disaster and Emergency Management Presidency said.(AP Photo/Khalil Hamra)

DUZCE, Turkey (AP) — A magnitude-5.9 earthquake hit a town in northwestern Turkey early Wednesday, causing damage to some buildings and widespread panic. At least 68 people were injured, mostly while trying to flee homes.

The quake was centered in the town of Golkaya, in Duzce province, some 200 kilometers (125 miles) east of Istanbul, the Disaster and Emergency Management Presidency said.

It struck at 4:08 a.m. (0108 GMT) and was felt in Istanbul, in the capital Ankara and other parts of the region. Dozens of aftershocks were reported, including one with a magnitude of 4.3.

The quake woke people from their sleep and many rushed out of buildings in panic in the province that experienced a deadly earthquake 23 years ago.

At least 68 people were treated in hospitals for injuries in Duzce and nearby regions, mostly sustained during the panic, including from jumping from balconies or windows. A 28-year-old Afghan was in serious condition after suffering a brain hemorrhage, Health Minister Fahrettin Koca said.

Schools in the region were closed as a precaution.

“Although the earthquake caused damage to many buildings in Golkaya, fortunately, we did not experience any serious destruction or loss,” Turkish President Recep Tayyip Erdogan said in an address to his ruling party’s legislators.

The quake demolished the exterior cladding and parts of the roof of a courthouse in Duzce, HaberTurk television reported. Among other damage, a two-story shop collapsed on a narrow street, it said. A mosque in the village of Saridere, near the epicenter, also sustained damage and was closed down, the state-run Anadolu Agency reported.

Many people were camping outdoors too afraid to return to their homes.

Like most other Duzce residents, Sebahattin Ozturk, 64, was asleep when the quake struck.

“There were a lot of sounds like explosions and then my wife started shouting,” he told The Associated Press. “Bottles and flowerpots fell over and the doors of our wardrobes slammed.”

To Ahmet Cevat Algun, it was a frightening reminder of the quake that struck in 1999.

Officials said around 80% of the buildings in the area were rebuilt or fortified following the 1999 earthquakes, which helped minimize damage.

Turkey sits on top of major fault lines and is frequently shaken by earthquakes.