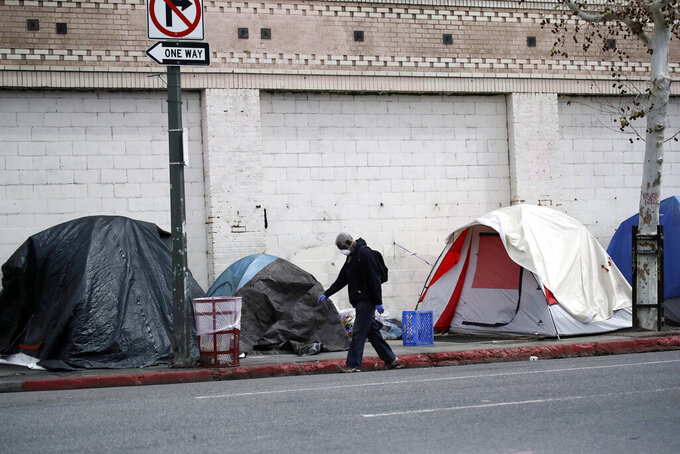 Marcio Jose Sanchez, ASSOCIATED PRESS
FILE - In this March 20, 2020, file photo, a man covers his face with a mask as he walks past tents on skid row in Los Angeles. The 9th U.S. Court of Appeals on Thursday, Sept. 23, 2021, overturned a federal judge’s sweeping order that required the city and county of Los Angeles to quickly find shelter for all homeless people living on downtown’s Skid Row. (AP Photo/Marcio Jose Sanchez, File)

LOS ANGELES (AP) — A federal judge’s sweeping order requiring the city and county of Los Angeles to quickly shelter all homeless people living on downtown’s Skid Row was overturned Thursday by an appeals court that called it an abuse of judicial discretion.

The 9th U.S. Court of Appeals found extensive error by U.S. District Court Judge David O. Carter, who is overseeing a major lawsuit about the problem of homelessness in Los Angeles.

The appeals court found plaintiffs lacked standing to bring most of their claims in the lawsuit and that Carter based his preliminary injunction on claims and “novel legal theories” not made by the plaintiffs.

“To fill the gap, the district court impermissibly resorted to independent research and extra-record evidence,” the appeals court said.

Carter toured Skid Row at least twice and held an extraordinary hearing at a homeless shelter before issuing a 110-page order in late April that slammed local officials’ inability to restrain the unprecedented growth of homelessness that has seen encampments spread into nearly every neighborhood in the region.

The order gave the city and county six months to house Skid Row homeless and to audit any spending related to the crisis of people living on the streets.

The lawsuit was brought by the LA Alliance for Human Rights, a coalition that includes businesses, residents, landlords, homeless people and others who allege that inaction by the city and county on the problem has created a dangerous environment.

“They found that his order was insufficiently supported by the evidence because he didn’t rely on what we submitted,” said attorney Elizabeth Mitchell, who represents the alliance. “It doesn’t mean that it isn’t true. Frankly, the county and city aren’t disputing his findings.”

The appeals court said Carter’s order was premised on his finding that structural racism was the driving force behind the Los Angeles homelessness crisis and the disproportionate impact on the Black community, but none of the plaintiffs’ claims were based on racial discrimination.

Mitchell said the alliance would file an amended complaint to include members of the coalition who have standing to address issues the court raised.

“I think a lot of people are looking at this as a roadblock,” Mitchell said. “But it’s more like a speedbump.”

County attorney Skip Miller said his clients are grateful for the ruling but remain committed to alleviating homelessness.

“The county will continue with its massive efforts to address homeless as it has all along,” Miller said. "We appreciate where Judge Carter is coming from and look forward to working with him to find a solution to this lawsuit.”

As of January 2020, there were more than 66,400 homeless people in Los Angeles County, with 41,000 within LA city limits, including thousands on Skid Row.

While the homeless population was once largely confined to the notorious Skid Row neighborhood in downtown, rows of tents, cardboard shelters, battered RVs and makeshift plywood structures are now familiar sights throughout the nation’s second-most populous city.