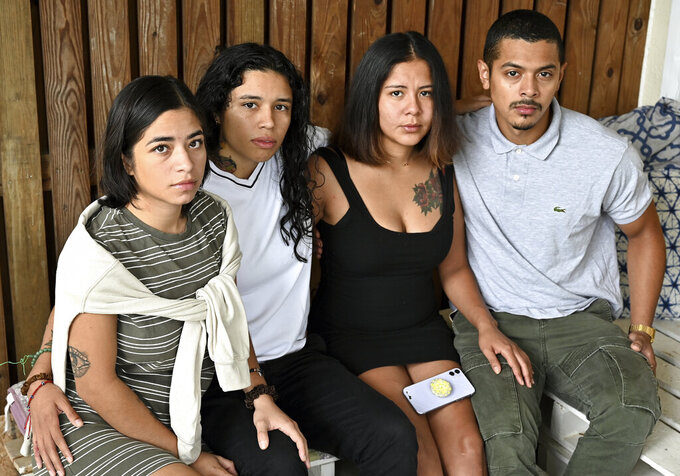 Marvin Joseph, ASSOCIATED PRESS
This Sept. 5, 2021, photo shows Erika Erazo, Erica Umana, Dayri Amaya and Brandon Cuevas, who alleged that Prince George's County law enforcement barged into their apartment and tased and killing their dog as well in Landover Hills, Md. Several officers have been suspended and the whole incident is under investigation. (Marvin Joseph/The Washington Post via AP)

LANDOVER HILLS, Md. (AP) — Dayri Amaya was in her bedroom one night in early June when she heard a knock on her door and voices on the other side announcing themselves as the Prince George’s County police.

Amaya, 24, panicked. She asked the officers why they were inside her apartment but she said they gave no answers. Instead, they commanded her to come out of the bedroom, and, she said, she complied with her hands up because the officers had their weapons drawn.

Soon, her roommate, 27-year-old Erica Umana, was in the apartment, too, pinned to the ground with a Taser pointed at her head. Umana’s friend started recording on her phone. Then their dog, 6-year-old Hennessy, ran out of the bedroom.

One officer fired his gun, then another officer fired, and a third shocked the dog with a Taser, according to the video and the women’s accounts. They screamed and pleaded to be let go as they watched the boxer mix writhe and bleed onto their beige carpet.

Late that night, after being detained for hours in the back of a hot police van, Umana reunited with Hennessy at a local animal hospital. Her pet was sedated and paralyzed, so she chose to have her euthanized — and was charged $800.

Three months after that shooting on June 2, Umana and Amaya know little more about what happened that night. They said an internal affairs investigator told them that a woman had called 911 and said that Hennessy and another dog had jumped on her outside. The woman was taken to the hospital for a dog bite, police said, and officers had gone to the apartment to investigate.

But the women wondered whether the officers had entered the apartment legally and whether they had been in compliance with their department’s protocols for handling animal-related calls.

“I was going crazy, because I knew this wasn’t right,” said Umana, who along with her friends recently hired the lawyers who represented the family of Freddie Gray, a Baltimore man who died in 2015 of injuries he sustained in police custody. “I knew I needed to get justice, not just for Hennessy but for all of us.”

The police department’s communications director, Julie Wright, declined to answer questions from The Washington Post about the June encounter — including what justification the officers had or if they had obtained a warrant. She cited the ongoing investigation by internal affairs and said that two of the officers remain suspended and that the third — who had been placed on administrative leave — has returned to full duties.

She would not say which dog allegedly bit the 911 caller and said the “nature of the victim’s injuries” are part of the investigation. The department declined to share the incident report with The Post and would not confirm how many times the dog was shot.

Police said after the incident that two officers investigating a report of a dog bite had gone to an apartment where they thought the pets were to be found and “obtained a key from an employee of the apartment complex” after no one answered. Police said a third officer “announced themselves” as they entered the Landover Hills-area apartment.

Attorneys Billy Murphy and Malcolm Ruff sent the county a letter announcing their intent to sue.

In an interview, Murphy and Ruff said the conduct of the officers in this incident was consistent with what they said was a pattern they have seen over years of interactions with the Prince George’s County Police Department. They said they are litigating more than a dozen claims or lawsuits against the county police force, which for decades has faced allegations of misconduct including racism and the use of excessive force.

Last year, Murphy and Ruff secured a $20 million settlement for the family of William Green, a Black man who police say was handcuffed in the front seat of a police cruiser when a Prince George’s officer shot him six times, killing him. At the time, experts called the misconduct payout one of the largest in the nation’s history. The officer in that case has been charged with murder.

“This is a problem that’s out of control,” Murphy said, calling the shooting of the dog “a very troubling incident.”

“It brings a lot of questions,” he said. “What right did they have to go into that apartment under these circumstances? Did they follow procedure?”

The general orders — the police employee manual — instruct officers to complete a case record for their supervisor if an animal is dangerous but contained. If an animal poses an immediate threat, officers are supposed to find and contain it “without endangering themselves or the public,” then call animal control, according to the protocol.

If officers cannot find the animal, they are to create a case record and give it to the animal management division within 24 hours.

Department protocol also says that officers should assist animal control in enforcing animal-related laws only after a warrant has been issued.

Ruff and Murphy say their clients were not presented with a warrant before the officers entered the apartment, and, in a video recording, one officer can be heard saying they did not need a warrant because they had “probable cause.”

“The way these officers acted so nonchalantly, acting like they had the right to do what they did, more than likely that means they have done this to someone before,” Ruff said.

The young women, who have been friends for a decade, said they have felt unsettled since their encounter with police. The absence of answers from the department has only exacerbated the uneasiness, said Umana, who was Hennessy’s primary owner.

The boxer mix, whom she called her “little cuddle buddy,” was a birthday gift from Amaya.

Umana had been on a walk with a friend, 21-year-old Erika Erazo, when police entered the apartment. Amaya frantically called her while still in her bedroom, and Umana and Erazo ran back to the apartment. Erazo began recording on her phone before they reached the unit, documenting her and Umana’s attempts to get inside.

“I knew right away they were in the wrong,” said Erazo, who took down the officers’ names and badge numbers and recorded until her phone’s battery died.

Her video shows police blocking the door as Amaya shouts from the kitchen, demanding to know why the officers are inside the apartment. Eventually, Umana and Erazo slip inside.

Erazo continues to record as officers detain both roommates. When the police order another friend to exit Amaya’s bedroom, the video shows, Hennessy runs out toward Umana.

The women said the dog was not aggressive. The officers shouted for them to restrain the dog, but Erazo said that as she reached toward the dog, she heard several loud bangs — which she did not know in the moment were gunshots. In the video, the women can be heard screaming and crying while trying to comfort the dog.

Still recording, Erazo kneels beside Hennessy despite commands from officers, saying over and over, “You’re okay, baby, you’re okay.”

Umana pleaded for someone to help her dog.

Afterward, the women said, the officers took everyone but Erazo downstairs. Erazo sat with Hennessy and tried to stop the bleeding. Medical workers took the dog downstairs, and then police handcuffed Erazo, too.

When the women eventually made it back home late that night, after having Hennessy euthanized at the vet, they found their apartment in disarray.

There was a hole in the floor, they said, from a bullet that punched through to the apartment below theirs. The carpet and wall were covered in blood that they have not been able to remove.

Umana said she moved out of the apartment after the shooting because she no longer felt safe there. She also started therapy, she said.

“It was very traumatic,” Umana said. “I feel like they don’t understand how much of what they do really impacts the people they are doing this to.”

Amaya is moving out at the end of this month. “When you least expect it, you’re the one that is getting violated by the law that is supposed to be protecting you,” she said.

Umana said that in the days after the shooting, she asked an internal affairs investigator whether the department would pay the $800 bill from the vet, since it was the department’s officers who shot Hennessy.

Umana said the investigator got back to her with a proposal: The department would give her the $800 if she agreed not to sue or speak publicly about what had happened.

She refused, she said.

“I’d rather get justice than $800. That was very pitiful of them to do that,” Umana said. “At that point, I really knew they knew they had done something wrong.”