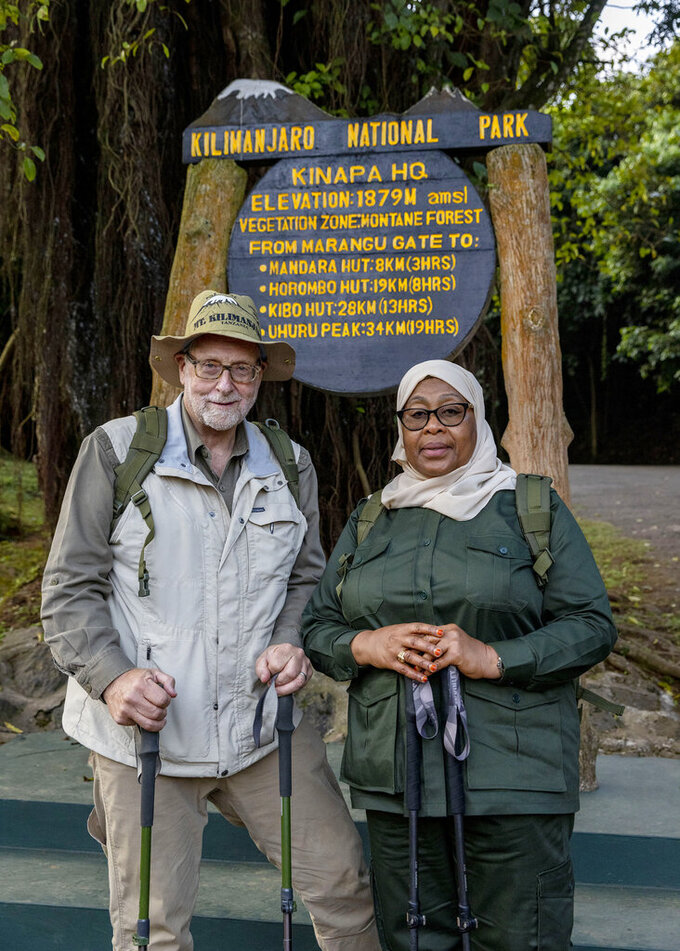 Karen Ballard, ASSOCIATED PRESS
Tanzanian President Samia Suluhu Hassan, right, appears with journalist Peter Greenberg as they begin their trek up Mt. Kilimanjaro for the television show “The Royal Tour.” Greenberg is resuming the series that shows off the best tourist spots of a country and features the nation’s leader as the tour guide. (Karen Ballard via AP)

The time spent recording voiceovers she could have done without.

“You tortured me!” the African leader needled Greenberg at a New York screening of the show, which is airing on PBS stations this spring.

“The Royal Tour,” a periodic feature on PBS for more than two decades, is just as the name implies. The veteran travel journalist, and by extension his viewers, are shown a nation's points of interest by the country's leader. Mexico, Israel, Ecuador, Rwanda and Poland have all been featured in the past decade.

“It's the one show where I'm not the tour guide,” Greenberg said in an interview. “I'm the visitor. And it's the one where I'm happy to be that way, because who knows a country better than the person who runs it?”

Tanzania is the first royal tour since the start of the pandemic, which briefly grounded Greenberg and was a key factor in Hassan getting her job.

When the shutdown began, “I was in a bunker, like everyone else,” said Greenberg, who is at the center of his own empire as travel editor of CBS News. He hosts the regular program “Eye on Travel” for CBS Radio and “The Travel Detective” on PBS.

His bunker was in Manhattan. Restless, he began rediscovering his neighborhood like a traveler, spotting one bronze plaque that honored a New Yorker who died on the Titanic.

Eventually, he realized it was his job to get back out there, to tell people how they could travel safely and navigate local COVID-19 regulations. Besides getting COVID, his followers were most worried about traveling someplace and not being able to get back, he said.

So Greenberg went through the maze of paperwork and testing to illustrate how it could be done.

“In one country I had to be tested five times,” he said. “I thought my nose was going to fall off.”

In Tanzania, Hassan was vice president to John Magufuli, a COVID denier who announced in 2020 that his country was free of the virus due to divine intervention. He died in March 2021 at age 61 and although it was never officially confirmed, it is widely believed he died of the coronavirus.

Hassan took over, and pointedly went before cameras to be vaccinated.

Hassan's royal tour program unfolds like most of them. Greenberg gives a brief historical sketch of a country and illustrates where it is located, and is shown arriving at the leader's official residence for an interview. Then, they take in the sights.

In Tanzania, they wandered around a marketplace and toured a primary school in Zanzibar, surveyed the majestic Mount Kilimanjaro from the air, saw mining of the rare Tanzanite gemstone and went on a safari in the Serengeti National Park. Hassan got behind the wheel, driving for what she said was the first time in 15 years.

“The Royal Tour” is often filmed as if Greenberg and the leader are taking in near-empty tourist sites alone, but self-aware producers sometimes pull the cameras back. In Israel, it looks like Greenberg is taking a boat ride down the River Jordan just with then-Prime Minister Benjamin Netanyahu and his family, until another view shows them surrounded by other boats stuffed with aides, a security detail and the press.

The Israeli tour that aired in 2014 began with Netanyahu and Greenberg playing soccer with local kids, until the prime minister tore a tendon and taping had to be delayed for several months.

Hassan also had a more sobering stop, a huge government warehouse stuffed with ivory confiscated from poachers, which allowed her to talk about the illegal trade that has decimated the elephant population.

Similarly, when Greenberg visited Poland for a 2019 program, Prime Minister Mateusz Morawiecki took him on an emotional walk through the museum on the grounds of the former Auschwitz concentration camp from World War II.

To participate in “The Royal Tour,” Greenberg needs a leader who is comfortable speaking English, is willing to give up at least a day for filming and who cedes all editorial control — the latter requirement one that some potential participants chafe against.

“When I was doing it, I never knew it would come out like this,” Hassan said in New York after viewing the episode on her country for the first time.

While not necessarily valentines, “The Royal Tour” does offer countries that want to boost their tourism a unique opportunity to show off their features to millions of potential travelers.

Hassan clearly recognized this when an audience member at the screening asked her the best time of year to plan a visit.

June or July, she said. But don't limit yourself.

“You can come anytime,” she said. “We can stop the rains for you.”