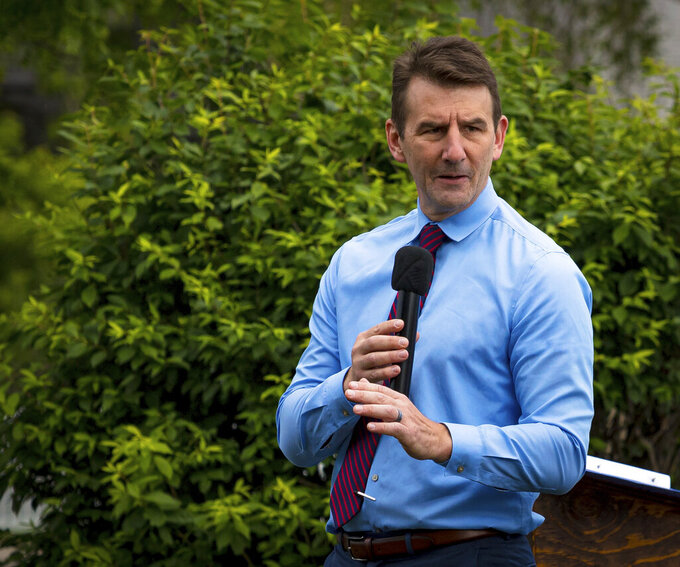 Joe Ruffalo, ASSOCIATED PRESS
U.S. Rep. Frank J. Mrvan, D-Ind., speaks during a Memorial Day ceremony at Hessville Park in Hammond, Ind., May 31, 2021. Indiana Republicans will show next week just how far they'll go in pushing their political control over redrawing the state's congressional districts. They could try to carve up the northwestern Indiana district held by Mrvan with the aim of ending Democrats’ decades long dominance there in hopes of gaining 8-1 dominance of the state’s U.S. House delegation. (Joe Ruffalo/The Times via AP)

INDIANAPOLIS (AP) — A Republican redistricting plan released Tuesday shores up a suburban Indianapolis district for the GOP while not making major changes to a potentially targeted Democratic district in northwestern Indiana.

The proposal for new congressional districts under the once-a-decade redistricting process shifts the northern tier of Democratic-leaning Marion County from the 5th District now held by Republican Rep. Victora Spartz to that of Indianapolis Democratic Rep. Andre Carson.

That move will boost Spartz as she lost badly in Marion County in last year’s election even as she won by an overall 50%-46% margin over Democratic candidate Christina Hale.

Other changes among Indiana’s nine congressional districts to account for population shifts don’t appear likely to shift the 7-2 control that Republicans have held on those seats since the 2012 elections just after the last GOP-controlled redistricting when Democrats held a 5-4 majority after the 2008 elections.

“We’re approaching perfection as far as the Republicans are concerned,” Indiana University political scientist Marjorie Hershey said. “I think they just made sure that they further entrenched where they felt maybe they needed it.”

Republicans have full control Indiana’s redistricting process through their dominance of the state Legislature and drew the maps behind closed doors.

The Republican plan leaves intact northwestern Indiana’s 1st District that includes the industrial cities of Hammond and Gary and has long been a Democratic stronghold. The proposed district along Lake Michigan wouldn’t change much from the one Democratic Rep. Frank Mrvan won last year by keeping all of Lake and Porter counties.

Mrvan said in a statement that he appreciated the Lake Michigan counties being kept in the same district because they “share interests in industry, manufacturing, educational institutions, civic organizations, and transportation infrastructure.”

Carving up the area in hopes of a Republican pickup might have started putting other GOP seats at risk, along with dividing the large Black and Hispanic populations of northwest Indiana, Hershey said.

“There’s a point at which if you go after too much, you start raising court challenges that are going to at least risk the possibility that the whole map goes down,” Hershey said.

Major changes in the other congressional districts include:

— The 9th District picks up all or parts of nine largely rural counties in southeastern Indiana from the 6th District. That district would include all the Ohio River counties from the Louisville, Kentucky, suburbs to the Ohio state line. Republican voters in the district’s rural areas have overwhelmed the vote from heavily Democratic Bloomington in Hollingsworth’s election wins.

House Speaker Todd Huston said in a statement that Republicans worked “to keep communities of interest together with a focus on compactness.” Huston didn’t respond to a request for an interview made through his office.

The congressional and Indiana House maps were released little more than 24 hours before the start of a two-day public hearing by the House elections committee, which is scheduled to advance the proposals to the full House for votes next week. State Senate maps are set for release next week, with a final Senate vote expected Oct. 1.

Democrats and voting-right activists criticize that fast-tracked process as giving the public little time to study and comment on the new maps.

The revised 5th District held by Spartz would have its population base in fast-growing Hamilton County just north of Indianapolis. The redistricting plan sheds its Indianapolis voters while keeping the factory cities of Anderson and Marion and adding Kokomo and Muncie.

“We see this as still an opportunity to go on offense in the Fifth and to hold Congresswoman Spartz accountable,” Anderson said.

Spartz campaign spokesman Tim Edson said in a statement that “Congresswoman Spartz looks forward to serving any 5th Congressional District approved by the state Legislature to benefit all Hoosiers."

This story has been edited to correct the first name of Indiana University political scientist Marjorie Hershey.