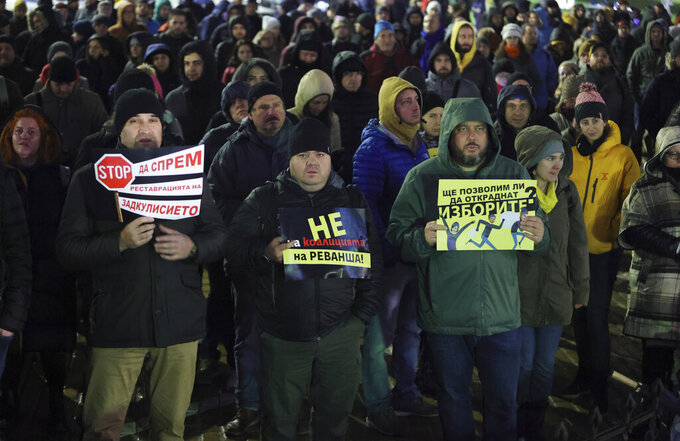 Valentina Petrova, ASSOCIATED PRESS
Protesters hold posters that read: "Will we allow them to steal our vote?" as hundreds of Bulgarians gather in front of Bulgarian Parliament on Thursday, Dec. 1, 2022. Hundreds of people attended a street protest in Bulgaria's capital to oppose a revision of the Election Code that reinstates paper ballots, which the previous reformist government had replaced with voting machines. (AP Photo/Valentina Petrova)

SOFIA, Bulgaria (AP) — Hundreds of people attended a street protest in Bulgaria's capital Thursday to oppose a revision of the Election Code that reinstates paper ballots, which the previous reformist government had replaced with voting machines.

The We Continue the Change party and the Democratic Bulgaria political alliance called the protest in Sofia, describing the switch as an attempt by the parties of the “old establishment” to allow the corruption of the election process.

Police cordoned off the Parliament building to prevent the angry demonstrators from storming it, but the protest remained peaceful.

The leader of the We Continue the Change party, Kiril Petkov, called on Bulgarians to stand up for their rights and join the protest.

“Today is the day when the democratic vote of every Bulgarian citizen will be substituted, the day when we open the door to 15% invalid ballots, when the distortion of the vote makes the whole system work corruptly,” he said ahead of the event.

The Election Code amendments were approved last week during an all-night sitting of the National Assembly's legal affairs committee, with support from the center-right GERB party of three-time Prime Minister Boyko Borissov, the Socialist Party and a party representing Bulgaria’s ethnic Turkish citizens.

The rushed move comes as a political stalemate in the European Union’s poorest member country has added to the economic woes of many Bulgarians at a time of galloping inflation and rising energy costs.

Bulgaria currently is governed by a caretaker Cabinet with limited powers following its fourth general election in less than two years.

The October election produced another fragmented parliament, where so far fruitless efforts to form a viable governing coalition are likely to result in another election early next year.