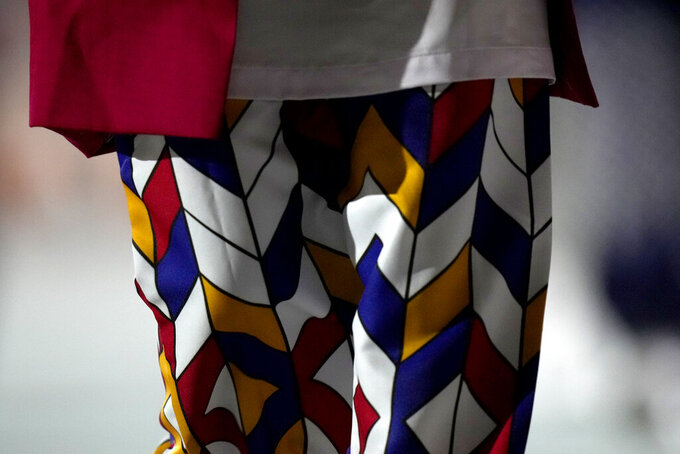 TOKYO (AP) — Olympics opening ceremonies generally focus on going big. They love to use grandeur and pomp and big visuals — fireworks, acrobatics, athletes marching en masse, choreography that's most impactful from a distance or on TV.

But when the athletes paraded in Friday night at the Tokyo Olympics opening ceremony, Associated Press photojournalist Petr David Josek decided to look at it a bit differently this time around.

When the athletes marched, he used his 400 mm lens — which is a very long lens. He went small. Zoomed in. Froze the moment. Paid attention to the little things.

What emerged was a delightful sea of detail — a mosaic of cultures and fashions and traditions.

Says Josek, a Czech Republic native: “Every Olympics there is a lot of talking about the uniforms, and it seems that some countries are really trying to make their mark in the ceremony. They either get well-known designers or they just come up with some interesting stuff to make their uniforms special. There was a lot of controversy about the Czech uniforms back home. So I was interested to see what other countries would bring.”

His camera found, among other things: boots from Bhutan striped with a multicolored gumdrop design. Detailed lime-green embroidery on a shirt from Cameroon. Splashes of custard yellow and royal blue in pants from Malaysia. The shiny black stripes of a Colombian hat.

The images that Josek made reveal the personalities of athletes and cultures. They bring out textures and colors. And they show, in close-up form, exactly what Olympics organizers say they want to highlight: the good and interesting things that happen when the world’s athletes come together.