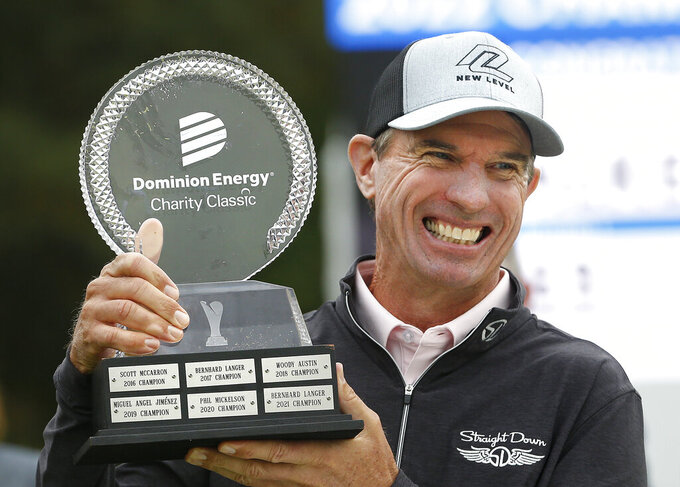 Steven Alker capped off one of the more remarkable stories on the PGA Tour Champions. He had no status when he turned 50 last year with three months left in the season and still made it to the postseason. And then he carried that momentum into this year by winning the Charles Schwab Cup.

Lydia Ko gave New Zealand another big title when she won the CME Group Tour Championship with its $2 million prize to capture the LPGA Tour player of the year award and win another Vare Trophy for having the lowest scoring average.

Not to be overlooked is Ryan Fox.

He ended last year at No. 213 in the world and was nearly three years removed from his last victory. The Masters remained only a dream.

Eleven months later, the 35-year-old Kiwi was No. 2 in the DP World Tour Rankings behind Rory McIlroy until a pedestrian start in the season finale took him out of the mix to be Europe’s 1.

“Beating Rory is pretty hard to do, but coming into this week with a chance is pretty cool and probably exceeded my expectations for the year,” Fox said at the DP World Tour Championship.

“If you had given me that at the start of the year, I would have jumped at it,” he said.

Perhaps the biggest perk was moving up to No. 27 in the world, which locks up his first trip to the Masters. This was the third time in the last five years Fox has played in three majors. He just never made it to Augusta National.

“That’s one I’ve been wanting for a long time, since before I turned pro,” he said. “I guess a couple of years ago, probably thought I was getting a bit old and it was going to be a little bit too hard. But to get it done this year is amazing.”

BACK ON THE BAG

Steve Williams is returning to work for Adam Scott.

The Kiwi caddie, who won 13 majors with Tiger Woods and was on the bag when Scott became the first Australian to win the Masters, will be working for Scott the next two weeks at the Australian PGA Championship and the Australian.

And there apparently is more to come.

“For me it’s exciting to work again with Steve and see if we can rediscover the magic,” Scott told Golf Digest. “As a player, you experience different points in your career. Right now on the PGA Tour is a time of change, and I’m adjusting to it. Having Steve and Greg doing a job share is going to help me get everything I need and that’s to be fresh at the biggest events.”

Williams worked on a regular basis for Scott through 2017.

“Steve is at a point in his life where he’d like to have a dabble again, so to speak,” said Scott, who has not won since the 2020 Genesis Invitational. “It’s a good balance for him because it won’t be a full year’s grind.”

The PGA Tour is losing its longest-tenured title sponsor.

As first reported by Golfweek, Honda is ending its title sponsorship of the Honda Classic in South Florida that dates to 1981. That’s one year before the Honda Accord became the first Japanese car produced in the United States.

The company said its “marketing mix” has evolved and it is focused on other ways to introduce its brand to consumers.

Left unsaid was its tough spot on the golf schedule.

It was squeezed when The Players Championship moved back to March to end the season before football started. It got even worse under a new schedule that puts two elevated events before (Phoenix, Riviera) and after (Bay Hill, The Players) the Honda Classic.

Tournament director Andrew George told Golfweek it has started looking for a new sponsor for 2024.

The longest-running title sponsor will be AT&T, which took over at Pebble Beach in 1986.

The European tour promotes itself as a global circuit, which is reflected as much in its winners as where the tournaments are played.

The 43-tournament schedule went to 21 countries. The winners came from 18 countries.

Leading the way was the United States, which comes with an asterisk. While the Americans won seven events on the European tour schedule, six of them were co-sanctioned by the PGA Tour (including the majors and events held during the two-week Scottish swing). The lone winner of a pure European tour event was Sean Crocker, who was actually born in Zimbabwe and moved to California when he was 5.

England and Spain each had six winners, with Jon Rahm and Pablo Larrazabal winning twice apiece.

The 18 countries included Poland for the first time, after Adrian Meronk won the Irish Open. Sweden’s only winner was Linn Grant, who won the Scandinavian Mixed playing from a separate set of tees.

Missing from the list of countries was Northern Ireland. Rory McIlroy won the DP World Ranking to become what is known as “Europe’s No. 1.” He played six regular European tour events.

Ted Scott should have learned from last year that Scottie Scheffler doesn’t need a lot of motivation. Scott, his caddie, provided it by offering cash (he didn’t say how much) if Scheffler holed out 10 times during the season from off the green.

But he remembers the challenge ended quickly.

Scott said the plan was for him to pay him on the spot. The middle of the U.S. Open, where Scheffler eventually finished one shot behind, wasn’t a good time for that. But he paid his debt, and then decided to go for the same wager this year.

Assuming the criteria for the Masters hasn't changed, 65 players currently are eligible for invitations. That includes first-timers Sahith Theegala, Sea Island winner Sahith Theegala and Ryan Fox. ... The United States and South Korea lead the eight countries that have qualified for the International Crown on May 4-7 at Harding Park in San Francisco. The others are Japan, Sweden, Thailand, England, Australia and China. The four players for each team will be determined by the April 3 women’s world ranking. ... The European tour is going back to the title “Race to Dubai” for its season rankings through support of Dubai's Department of Economy and Tourism. It was called the DP World Tour Rankings this year when DP World became title sponsor of the tour.

Adam Svensson was the first player in more than two years to win a PGA Tour event after opening with a 73 or higher.

"As much as I’m excited that I’ve won, I’m also excited for some time off and to get ready to become a bride.” — Lydia Ko after winning the CME Group Tour Championship to claim the $2 million prize and win LPGA player of the year.