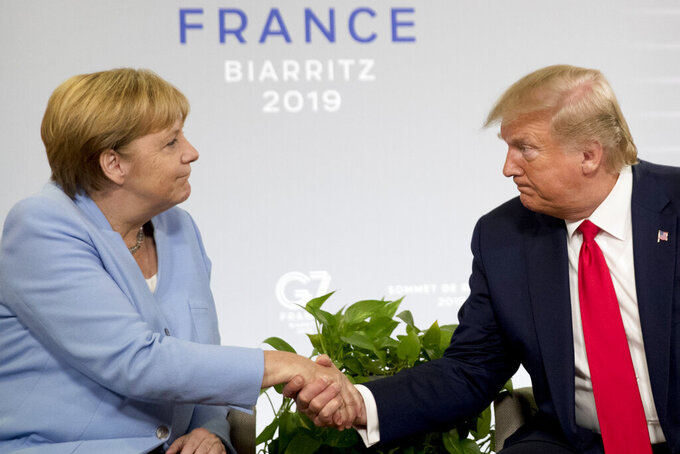 Andrew Harnik, ASSOCIATED PRESS
FILE - In this Aug. 26, 2019 file photo, U.S. President Donald Trump and German Chancellor Angela Merkel, left, shake hands during a bilateral meeting at the G-7 summit in Biarritz, France. Angela Merkel has just about seen it all when it comes to U.S. presidents. Merkel on Thursday makes her first visit to the White House since Joe Biden took office. He is the fourth American president of her nearly 16-year tenure as German chancellor. (AP Photo/Andrew Harnik, File) 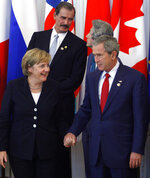 Angela Merkel has just about seen it all when it comes to U.S. presidents.

The German chancellor is making her 19th and likely final official visit to the U.S. on Thursday for a meeting with President Joe Biden — her fourth American president — as she nears the end of her 16-year tenure.

Merkel, who turns 67 on Saturday, will be heading into political retirement soon, after deciding long ago not to seek a fifth term in Germany’s Sept. 26 election.

One of the longest-serving leaders of one of the closest U.S. allies, Merkel is set for a warm welcome when she meets Biden during her first visit to Washington since he took office in January.

Still, contentious issues are on the table — notably the Nord Stream 2 gas pipeline running from Russia to Germany, which the U.S. has long opposed, and Biden's efforts to convince European allies to drop objections to intellectual property waivers for sharing COVID-19 vaccines with the developing world.

It's a fitting coda for Merkel's dealings with American leaders. A look at some of the highs and lows over the years:

Merkel came to power early in Bush's second term and set about repairing relations chilled by predecessor Gerhard Schroeder's vocal opposition to the war in Iraq.

She quickly became a close ally, perhaps finding that the way to the president's heart was through his stomach. During a visit to Merkel's parliamentary constituency in northeastern Germany in July 2006, Bush couldn't stop talking about a wild boar roast the chancellor laid on for him.

At a Group of Eight summit in St. Petersburg, Russia, a few days later, Bush gave Merkel an impromptu neck-and-shoulder rub that quickly spread across the internet. Merkel hunched her shoulders in surprise, threw her arms up and grimaced, but appeared to smile as Bush walked away. When Merkel visited the White House the following January, Bush promised: “No back rubs.”

In November 2007, Bush welcomed Merkel to his Crawford, Texas ranch. “In Texas, when you invite somebody to your home, it’s an expression of warmth and respect and that’s how I feel about Chancellor Merkel,” a jeans-clad Bush said as he greeted Merkel at the property's helipad and drove her in his pickup to his home.

Merkel's relationship with Obama didn't have the greatest start. In July 2008, the chancellor squashed the idea of candidate Obama delivering a speech at Berlin's signature Brandenburg Gate, saying it was a backdrop for speeches by presidents. Obama switched to another Berlin landmark, the Victory Column.

Still, the chancellor — who shared Obama's businesslike manner but, unlike the new president, never had much time for soaring political rhetoric — forged a strong working relationship with him. It appeared to gain personal warmth over time.

During Merkel’s 2011 visit to Washington, the two leaders caught dinner at a high-end restaurant, an unusual overture by Obama. A few days later, he hosted Merkel at the White House for a formal state dinner, where he awarded her the Presidential Medal of Freedom, the highest U.S. honor bestowed upon civilians.

Obama got his chance to speak at the Brandenburg Gate in June 2013. Merkel was there to introduce him.

A tough test followed with reports later that year that the U.S. National Security Agency had listened in on German government phones, including Merkel’s. Merkel declared that “spying among friends” was unacceptable. But she didn't let it cast a lasting shadow over trans-Atlantic ties.

Obama made a last visit as president in November 2016, dining with Merkel at his Berlin hotel. He was back as ex-president a few months later, participating in a public discussion with Merkel and calling her "one of my favorite partners throughout my presidency.”

Merkel's congratulations to Trump after his 2016 election set the tone for much that followed. In a pointed message, she offered “close cooperation” on the basis of shared trans-Atlantic values that she said include respect for human dignity regardless of people’s origin, gender or religion.

The former physicist and the former reality TV star were never an obvious personal match but generally kept up appearances when in public together.

Merkel's first visit to the Trump White House in March 2017 produced a famously awkward moment in the Oval Office. Photographers shouted “handshake!” and Merkel quietly asked Trump “do you want to have a handshake?” There was no response from the president, who looked ahead with his hands clasped.

Trump never made a bilateral visit to Germany in four years in office, though he did come for the Merkel-hosted Group of 20 summit in Hamburg in 2017.

At the 2018 Group of Seven summit in Canada, Merkel's office released a photo of her leaning on a table in front of Trump, surrounded by other apparently frustrated allied leaders.

Merkel's Germany was a favorite target of Trump's ire. The president called the NATO ally “delinquent” for failing to spend enough on defense and announced that he was going to pull out about 9,500 of the roughly 34,500 U.S. troops stationed in Germany.

Merkel suggested in 2017 that Europe could no longer entirely rely on the U.S. And, speaking at Harvard University in 2019, she said a new generation of leaders must “tear down walls of ignorance” and reject isolationism to overcome global problems.

Merkel greeted Biden's 2020 election with barely disguised relief, saying he brought decades of experience to the job, that “he knows Germany and Europe well” and citing good memories of previous meetings.

In February, she welcomed his first address to a global audience effusively.

“Things are looking a great deal better for multilateralism this year than two years ago, and that has a lot to do with Joe Biden having become the president of the United States,” Merkel said.

As vice president, Biden had a rapport with Merkel during the Obama presidency, but the two were never particularly close.

Seeking to strengthen ties, Biden made a priority of engaging with Merkel in several early videoconference meetings shortly after taking office. He also waived sanctions on the company behind the controversial Nord Stream 2 pipeline, even as he reiterated his preference that Germany abandon the project.

Since Biden's Jan. 20 inauguration, there hasn't been much opportunity for in-person interaction. Both attended last month's G-7 summit in England and NATO summit in Brussels, but Thursday will be their first significant bilateral meeting.

Merkel will be the first European leader to visit the White House in the Biden administration.

AP writer Zeke Miller in Washington contributed to this report.