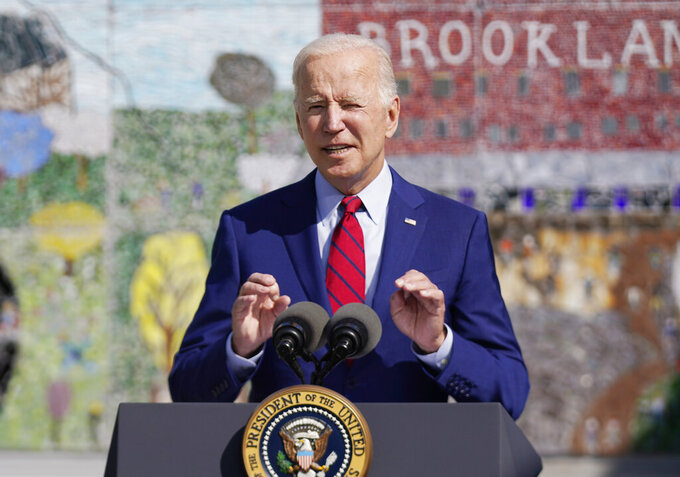 Manuel Balce Ceneta, ASSOCIATED PRESS
President Joe Biden speaks at Brookland Middle School, Friday, Sept. 10, 2021 in Washington. Biden has encouraged every school district to promote vaccines, including with on-site clinics, to protect students as they return to school amid a resurgence of the coronavirus. (AP Photo/Manuel Balce Ceneta)

Hoping to prevent another school year from being upended by the pandemic, President Joe Biden visited a Washington middle school Friday to push his new COVID plan, accusing some Republican governors of being “cavalier” with the health of children.

Biden's plan, announced a day earlier, would require vaccinations for up to 100 million Americans and seek to ramp up virus testing. With those measures in place, he said, schools should present little risk for transmission of the coronavirus.

“I want folks to know that we’re going to be OK,” Biden said during an appearance at Brookland Middle School, a short drive from the White House. “We know what it takes to keep our kids safe and our schools open.”

But as the surging COVID-19 delta variant casts uncertainty over the start of a new school year — in some cases prompting schools to shut down after a few days — it’s unclear whether Biden’s plan will go far enough to prevent mass disruption. Biden has little direct authority over most schools, which are generally governed at the local level, and his plan faces sharp resistance from Republicans.

Under his expanded vaccine mandate, all employers with more than 100 workers must require them to get shots or test for the virus weekly. A separate provision requires vaccines for workers in Head Start programs and at schools operated by the federal government, affecting about 300,000 workers.

The plan does not explicitly require vaccines for teachers in locally governed schools, but some education leaders believe the employer rule will effectively amount to a teacher vaccine requirement in many states.

That part of the plan is being enacted through a forthcoming rule from the Occupational Safety and Health Administration. And in states with OSHA plans, teachers will be among those required to get the vaccine or face testing, according to an interpretation by AASA, an association of school superintendents.

It's expected to apply to 26 states, including several with Republican governors who opposed Biden’s plan, such as South Carolina, Tennessee and Arizona.

Biden did not address that aspect of his plan on Friday. Instead, he urged states to issue their own vaccine requirements for school workers.

“About 90% of school staff and teachers are vaccinated — we should have that at 100%,” Biden said. “I’m calling on all of the governors to require vaccination for all teachers and staff.”

Governors in a few states have already ordered teachers to get vaccinated, including in California, Oregon, New Jersey and New York. But most leave it up to school districts, and some Republican-led states have barred vaccine mandates.

Biden on Friday rebuked Republican governors who vowed to fight his new rules.

But most of his remarks struck a more conciliatory tone than a Thursday speech in which Biden vented his own frustrations with those who remain unvaccinated. He returned to a message of unity on Friday, insisting that “we’ve got to come together” to beat the virus.

Speaking to students at Brookland, Biden applauded those who had already been vaccinated. If all of them get shots, Biden promised to invite them to a special visit at the White House.

He also held up Washington, D.C., as a model. The city has hosted vaccine clinics at its public schools, and 65% of children age 12 to 17 have gotten at least their first shot, a rate that Biden said is among the highest in the nation.

In a plea to America’s families, Biden urged parents to get teenagers and other eligible children vaccinated as soon as possible. He argued that it’s no different than standard vaccinations for measles, mumps, rubella and other diseases.

Among the greatest threats to his plan, however, is the large population of children who are still too young to get the shot. Most elementary and middle schools have children below age 12 who have not been approved to receive the coronavirus vaccines.

Speaking to those concerns, Biden said he supports an “independent” scientific process to review the shots but he also promised to make them available to younger children as soon as it’s safe.

“I will do everything within my power to support the Food and Drug Administration in its efforts to do the science as safely and as quickly as possible,” he said.

The expanded vaccine mandate does not apply to students, but some districts have moved to require shots for students. The Los Angeles district this week became the first major district to enact a mandate for students ages 12 and up.

In addition to vaccines, Biden’s plan aims to ramp up virus testing in schools.

Testing policies vary widely by school and state. Some districts regularly test all students, including in the Los Angeles district, while some forgo any testing. And for many, it’s getting harder to find testing supplies amid a nationwide shortage in rapid tests.

As part of the White House plan, the government is working to increase the supply of virus tests and make them available at retailers including Walmart and Amazon. Biden said it will lead to 300 million more coronavirus tests, including some for schools.

“I want all schools setting up regular testing programs to make sure we detect and isolate cases before they can spread,” Biden said.

The plan drew support from the country’s two largest teachers unions, the National Education Association and the American Federation of Teachers. Both groups have also endorsed vaccine mandates for all teachers and school staff.

Other education groups that support the plan include the National School Boards Association, which said it comes at an “extremely critical time.” The group said it welcomes Biden’s support even as education leaders face “threats, abuse and harassment” over their public health measures.

Speaking alongside Biden on Friday, first lady Jill Biden praised educators as “heroes” for their work over the past year. A longtime community college professor, the first lady said Americans have a duty to protect students as they return to the classroom.

“We owe them a promise to keep their schools open as safe as possible,” she said. “We owe them a commitment to follow the science — we owe them unity so that we can fight the virus, not each other.”