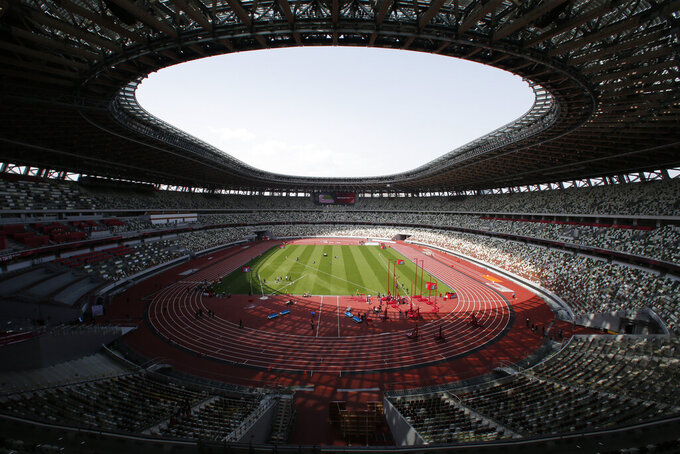 Shuji Kajiyama, ASSOCIATED PRESS
FILE - A general view of National Stadium during an athletics test event for the Tokyo 2020 Olympics Games in Tokyo, on May 9, 2021. The $1.4 billion Tokyo national stadium, built by the Japanese government for last year’s Olympics, is being viewed as the site for track and field's world championships. A team from World Athletics — the governing body of the sport — met with Tokyo Governor Yuriko Koike on Wednesday, May 25, and was to tour the stadium on Thursday, May 26.(AP Photo/Shuji Kajiyama, File)

TOKYO (AP) — The $1.4 billion Tokyo national stadium, built by the Japanese government for last year’s Olympics, is being viewed as a site for the track and field world championships.

An inspection team from World Athletics — the governing body of the sport — met with Tokyo Governor Yuriko Koike on Wednesday and was to tour the stadium on Thursday.

The next world championships, which were postponed from 2021 to make way for the Olympics, will be held in July in Eugene, Oregon. Budapest, Hungary, is set to host in 2023.

Tokyo would be considered as a favorite for 2025. That choice is expected in July. The 2027 venue also has yet to be chosen.

Antti Pihlakoski, the chairman of the inspection team, praised Tokyo. But neither he nor Koike took any questions at a brief photo opportunity at the Tokyo Metropolitan Government building.

Pihlakoski said World Athletics had four candidates for 2025. He did not name them but they are reported to be Tokyo, the Kenyan capital of Nairobi, Singapore and a venue in Poland.

“I do believe that there is no other city in the world that could have organized (Olympic) competitions during the COVID time, and did it in a very great manner," he said. "And all of the sporting world owes you a very deep thank you.”

Sebastian Coe, the head of World Athletics, said last year in Japan that he wanted to bring the championships to the city. Coe is not known to be in Tokyo this time. Many of World Athletics' sponsorship deals are brokered through Dentsu Inc., the giant Japanese advertising and public relations company.

Dentsu was the main driver in lining up more than $3 billion in local sponsorship for the Tokyo Olympics and is a powerful player in Japanese business, politics and media. Much of Dentsu's clout is in sports marketing and handling issues around broadcast rights.

Tokyo held the world championships in 1991 and Osaka was the host in 2007. Koike said she recalled the 1991 championships and Carl Lewis’ world record of 9.86 seconds in the 100-meter dash.

“His overwhelming run is still fresh in the memories of all residents of Tokyo and all of Japan. And I too clearly remember those days," Koike said.

Coe, a two-time Olympic 1,500-meter gold medalist and a former member of the British Parliament, is a powerful player in his own right and is viewed as a possible successor to International Olympic Committee President Thomas Bach. Bach's term ends in 2025.

The Japanese city of Sapporo is also among the favorites to land the 2030 Winter Olympics. It is competing with Salt Lake City and Vancouver.

The IOC is expected to name the venue for the Winter Olympics in May 2023 during meetings in Mumbai, India. It could also make a dual award and name the 2034 host city.