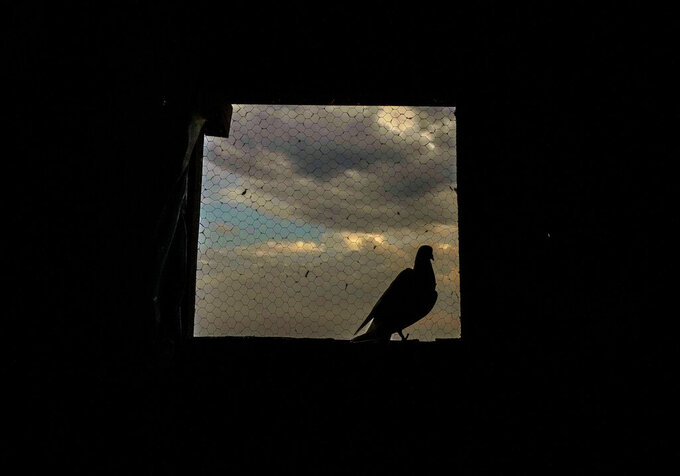 Mukhtar Khan, ASSOCIATED PRESS
A pigeons sits by a window mesh inside the house of a Kashmiri pigeon handler in Srinagar, Indian controlled Kashmir, June 17, 2022. The centuries-old tradition of pigeon keeping has remained ingrained to life in the old quarters of Srinagar where flocks of pigeons on rooftops, in the courtyards of mosques and shrines and around marketplaces are a common sight. Many of these are domesticated, raised by one of the thousands of pigeon keepers there. (AP Photo/Mukhtar Khan)

SRINAGAR, India (AP) — As a teenage schoolboy, Syeedna Ismail Hussain Banday cultivated pigeon keeping as his favorite hobby in the heart of Indian-controlled Kashmir. Three decades later, though he went on to become a civil engineer and set up his own construction company, his untiring love for pigeons continues.

Banday, 44, is now a professional pigeon breeder and has his own flock of some 400 pigeons.

“These birds are integral part of my life,” Banday said. “They have made me a patient person and brought discipline in my life.”

The centuries-old tradition of pigeon keeping has remained ingrained to life in the old quarters of Srinagar where flocks of pigeons on rooftops, in the courtyards of mosques and shrines and around marketplaces are a common sight. Many of these are domesticated, raised by one of the thousands of pigeon keepers there. Every week on Friday and Sunday, various breeds of domesticated and wild pigeons are sold in an open bazaar, locally known as Pigeon Market.

Pigeon handlers release their birds into the air to intermingle with other pigeons. The birds are often accompanied by strays when they return to their coops, usually set up in the attics of homes. Unlike western countries where racing pigeons prevail, handlers say high-flying pigeons are preferred in south Asia.

Like Banday, 33-year-old Imran Ahmed Bhat, a cab service provider, is a keen pigeon keeper, describing it as “passionate work.”

“I had a baby pigeon whose parents died. I would chew grains and feed him,” he said.

As Kashmir’s protracted conflict continues, pigeon keeping has proliferated, particularly in downtown Srinagar, the heartland of anti-India sentiment in the disputed region split between Pakistan and India and claimed by both.

Since 1989, an armed rebellion backed by many Muslim Kashmiris has raged in the Indian-held portion of Himalayan Kashmir that seeks to unite the territory, either under Pakistani rule or as an independent country.

Indian police have several times detained pigeons under suspicion of spying after the birds flew from the Pakistan side into Indian territory along the heavily guarded border.

Amid relentless fighting, long security lockdowns, regular shutdowns and protests that often would turn violent, many young men started raising pigeons as a hobby and part-time business by selling them.

But pigeon keeping is hard work. The owners brave curfews and harsh winters. They clean out coops, lug bird feed to roofs and provide year-round care for the pigeons, giving them vaccines and dietary supplements.

Banday said some of the pigeon varieties are very costly. He owns two “Teddy” pigeons that he said cost about $2,700 for the pair.

“For an ordinary person, they are almost the same. But some pigeon breeds are very sensitive and need meticulous care,” he said.