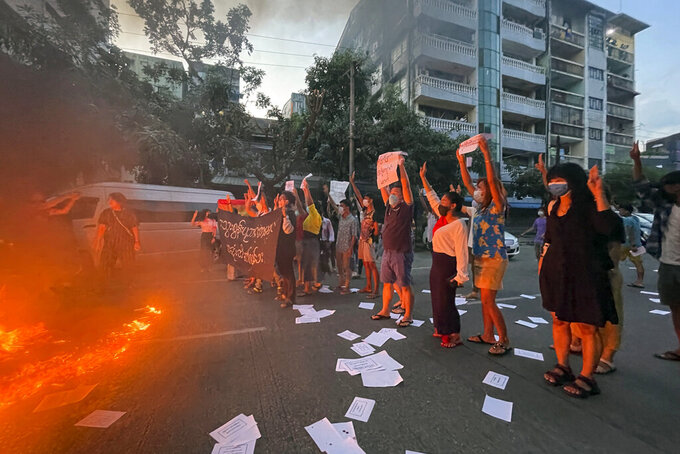 The Security Council’s action comes as Myanmar’s army appears to be conducting a major offensive in the country’s northwest amid warnings that the nation's humanitarian situation is sharply deteriorating, with food shortages and a weakened public health system.

A press statement carries less weight than an official resolution, and can serve as a way of achieving consensus among Security Council members that would otherwise be difficult to achieve. The body appears to be constrained from taking more serious action because two of its permanent members, Russia and China, maintain warm relations with Myanmar’s current government.

Myanmar’s military seized power in February, ousting the elected government of Aung San Suu Kyi. The takeover met with widespread public protests that were suppressed with deadly force. In response, armed opposition to military rule has arisen, and several U.N. experts have warned that the Southeast Asian nation risks tumbling into civil war.

The Security Council statement, issued late Wednesday in New York, said it “underlined the importance of steps to improve the health and humanitarian situation in Myanmar, including to facilitate the equitable, safe and unhindered delivery and distribution of COVID-19 vaccines.”

It also called for “full, safe and unhindered humanitarian access to all people in need, and for the full protection, safety and security of humanitarian and medical personnel.” The security situation in Myanmar, as well as the difficulties that aid agencies face in getting permission from the government to operate in remote areas, have greatly restricted the flow of assistance.

On Monday, the U.N. humanitarian chief urged Myanmar’s military leaders to provide unimpeded access to more than 3 million people in need of life-saving assistance “because of growing conflict and insecurity, COVID-19 and a failing economy.”

Martin Griffiths warned that without an end to violence and a peaceful resolution of Myanmar’s crisis, “this number will only rise."

The council’s statement reaffirmed support for Myanmar’s democratic transition and reiterated its earlier call on the military “to exercise utmost restraint.” The government blames the violence on opposition groups, some of which it has officially designated “terrorist” organizations.

The council also reiterated support for the role of the Association of Southeast Asian Nations in helping find an end to the violence and the political crisis. It called for a five-point program suggested by ASEAN to be implemented, including a visit to Myanmar by the regional group’s special envoy.

A planned initial visit to Myanmar by the envoy was canceled when the government refused to allow him to visit Suu Kyi, who has been detained since the takeover and is being tried on charges her supporters and others say are spurious.

The government said the envoy cannot meet her because of her legal situation. Its failure to allow access resulted in ASEAN not allowing Myanmar’s leader, Senior Gen. Min Aung Hlaing, to attend a regional summit last month, an unprecedented rebuke to a fellow member of the organization.

Several civic organizations opposed to military rule expressed disappointment with what they said was inadequate action by the Security Council.

“Words and statements of ‘concern’ from the highest authority of the world body disregard the real threats against human security that is experienced by the people of Myanmar at the hands of the junta who continues to slaughter innocent people with total impunity,” said Khin Ohmar of Progressive Voice, a research and advocacy organization for human rights and social reform.

“The escalating violence in Myanmar is an embarrassment and a testament to the repeated failures of the U.N. system that challenges the relevancy of the U.N. Security Council to maintain international peace and security,” she said.