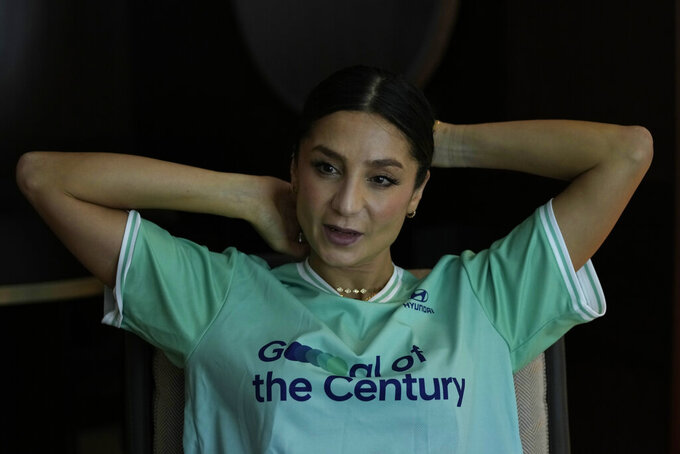 Hassan Ammar, ASSOCIATED PRESS
Nadia Nadim speaks during an interview with The Associated Press in Doha, Qatar, Thursday, Dec. 1, 2022. Danish women's national team player Nadia Nadim was about to settle in for her job as a television commentator at the World Cup when she was shaken by tragic news: Her mother, who had helped the family flee the Taliban when Nadim was just a girl, had been hit by a car while rushing home to watch her daughter on TV. (AP Photo/Hassan Ammar)

DOHA, Qatar (AP) — Danish forward Nadia Nadim was in the midst of a World Cup match as a television commentator when she was suddenly rocked by tragic news. Her mother, who had helped the family flee the Taliban in Afghanistan when Nadim was just a girl, had been killed in a traffic accident in Denmark.

Nadim left her job in the middle of the broadcast to rush home, but was back in Qatar a week later working with the London-basted ITV network.

“I think it wouldn’t help me, my mom wouldn’t come back, if I just laid and cried my eyes out,” Nadim said. “And secondly, I think I need to be strong for her. She was a very strong woman. I think one thing is talking about being strong, another thing is demonstrating it. That's also my way to honor her."

The 34-year-old Nadim has overcome an arduous past to excel both on and off the field. She's had a lengthy career with the Danish national team and several pro clubs, and now she's got a flourishing TV career. Oh, and she's also a doctor after earning her medical degree earlier this year.

But soccer is the constant in her life.

Nadim grew up in Kabul. One day when she was about 10, her father — an Afghan army general — was summoned to meet with the Taliban leaders. He never returned.

Under the Taliban, women were not allowed to have jobs or even leave the home without a male relative. That made life untenable for her mother, who faced raising five girls on her own.

“We tried to survive for a couple of years, it didn’t really work out. And then at the end my mom made the decision for us to have a better future and find rescue somewhere else, find a life somewhere else. We were transported and smuggled from one country to the other and somehow ended up in Denmark,” Nadim said. “It’s all due to my mom and her intelligence, and her will to fight and to survive.”

After six months in a Copenhagen refugee camp, the family was granted asylum.

Nadim remembered watching Danish girls practice through a fence, describing it as “one of those moments when you get hit by lightning and then everything kind of makes sense.”

“They just looked so happy and free. And at that moment, I wanted to be on that field and feel what they were feeling. I have this thing in me, I guess a fire or obsession. I get obsessed with things that I really need to achieve, or the goals I set myself," she said. “Then a couple of months later I got the courage to go ask the coach to let me in."

Asked if she knew whether she was any good, Nadim joked: “I was born good.”

Nadim went on to play for the national team for her adopted country, scoring 38 goals in 103 appearances. She was left of the team's latest roster, however, because of an ACL injury in September.

Nadim won a French league title in 2021 with Paris Saint-Germain, one of the many stops she's made during a pro career. She currently plays in the United States with Racing Louisville of the National Women's Soccer League. While unlikely to play at the start of Racing's season next year because of her injury, she hopes to return soon.

She's also passionate about humanitarian causes, and in 2019 visited the Kakuma refugee camp in Kenya with the Danish Refugee Council. The aim was to promote a women's team, the Kakuma Stars.

In Qatar, she's a representative — along with England great Steven Gerrard and K-pop stars BTS — for Goal of the Century, a sustainability campaign launched by FIFA sponsor Hyundai. Nadim said the trip to Kakuma made her aware of the plight of environmental refugees.

She passionate about humanitarian causes because of her mother.

“I know this might sound a bit grandiose," she said, "but I just feel like everything that I can do to have an impact on the world and on someone’s life, I’ll do it."