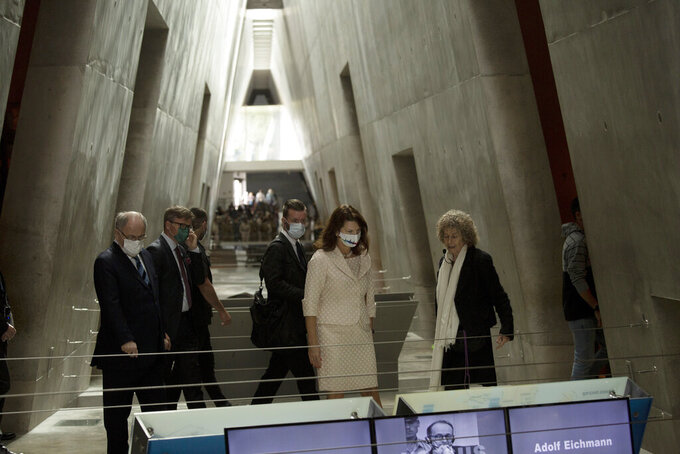 JERUSALEM (AP) — Sweden's foreign minister visited Israel on Monday in an effort to mend ties after years in which the two countries have been at odds over the conflict with the Palestinians.

Sweden's Social Democratic-led government recognized Palestinian statehood in 2014, making it the first large European country to do so since the end of the Cold War. Its former foreign minister’s comments in support of the Palestinians drew angry responses from Israeli officials.

“We might not always agree, but good friends disagree,” Foreign Minister Ann Linde said at a press conference with her Israeli counterpart. "And I think it’s really, really important that you know that Sweden is a friend of Israel."

Israeli Foreign Minister Yair Lapid thanked her for reiterating Sweden's support for Israel and for Sweden's efforts to combat antisemitism. The two spoke by phone last month in the first call between their countries' foreign ministers in seven years.

“I believe that because of the page we are turning here today, there will be a whole new book of friendship and cooperation," Lapid said.

Linde began her trip with a visit to the Yad Vashem Holocaust memorial in Jerusalem, where she placed a wreath in memory of the 6 million Jews who were killed by Nazi Germany and its collaborators.

“On behalf of Sweden I promise that we say ‘Never again,’ and mean it. We will continue to take action to combat antisemitism in all its forms, to make sure that we never forget, “ she said.

Linde also met with Israel's largely ceremonial president, Isaac Herzog, and she was expected to meet with Palestinian officials in the occupied West Bank. During the press conference in Jerusalem she reiterated Sweden's support for a negotiated two-state solution.

Israel's new government, a coalition of parties from across its political spectrum, has looked to improve relations with other countries following the long rule of former Prime Minister Benjamin Netanyahu, whose nationalist policies strained ties with neighboring Jordan and some European countries, as well as with the Democratic party in the United States.

Israel's current prime minister, Naftali Bennett, is opposed to a Palestinian state, and past leaders have said the international community should not recognize such a state until a final agreement is negotiated between the two sides. There have been no substantive peace talks in over a decade.

Israel told her she was no longer welcome in 2016 after she called for investigations into alleged “extrajudicial killings” of Palestinians by Israeli forces during a wave of Palestinian attacks and clashes between the two sides.

A year earlier, Israel criticized comments she made in the aftermath of the Islamic State group’s attack on Paris in which she appeared to link radicalization among Muslims worldwide to Palestinian despair.