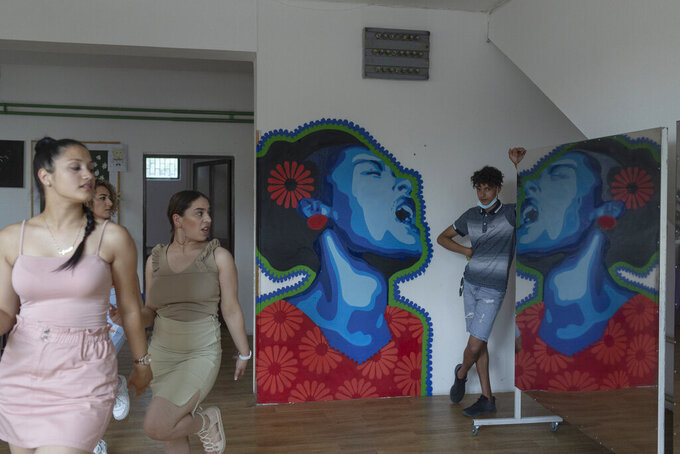 Marko Drobnjakovic, ASSOCIATED PRESS
From left, Dijana Ferhatovic, 18, Silvia Sinani, 24, and Zlata Ristic, 27, members of the Pretty Loud band, practice at a music studio in Belgrade, Serbia, Wednesday, June 16, 2021. A female Roma, or Gypsy, band in Serbia has used music to preach women's empowerment within their community. Formed in 2014, “Pretty Loud” symbolically seeks to give a louder voice to Roma girls, encourage education and steer them away from the widespread custom of early marriage. (AP Photo/Marko Drobnjakovic)

BELGRADE, Serbia (AP) — Their songs are about “women chained” in abuse witnessed by generations, or teenage brides being forced into marriage by their fathers. And they tell women to seek love, fight back and stand up for their right to be equal with men.

A female Roma band in Serbia is using music to preach women's empowerment within their community, challenging some deeply rooted traditions and centuries-old male domination.

Formed in 2014, “Pretty Loud” symbolically seeks to give a louder voice to Roma girls, encourage education and steer them away from the widespread custom of early marriage. The band has gained popularity and international attention, performing last year at the Women of the World Festival in London.

“We want to stop the early marriages ... we want the girls themselves, and not their parents, to decide whether they want to marry or not,” said Silvia Sinani, one of the band members. “We want every woman to have the right to be heard, to have her dreams and to be able to fulfil them, to be equal,”

Sinani, 24, said the idea for an all-female band was born at education and artistic workshops run for Roma, or Gypsies, by a private foundation, Gypsy Roma Urban Balkan Beats. The girls initially danced in GRUBB's boys' band and then decided they wanted one of their own, she said.

“They (GRUBB) named us ‘Pretty Loud’ because they knew that women in Roma tradition are not really loud," she said.

The band's music, a combination of rap and traditional Roma folk beat, mainly targets a younger generation of girls who are yet to make their life choices — the band itself includes 14-year-old twin sisters. The songs tackle women's position in their community, and seek to boost their self-awareness.

The quest is essential in a community where early marriages are widespread — a UNICEF study published last year showed that over one-third of girls in Roma settlements in Serbia aged 15-19 are already married. Of them, 16% were married before they were 15.

Alarmed, Serbian authorities, too, have formed a state commission to try to reverse the trend.

“I am an example of early marriage,” said band member Zlata Ristic, 27, who gave birth to a baby boy at 16. “Nobody forced me into it but I have realized I should not have done it."

Now a single mother, Ristic said she wants other women in similar situations to know that their lives are not over once they have children, and that they can still pursue their dreams.

“My biggest reward is when 14-year-old girls write to me and say they want to become one of us, that they now attend school thanks to us, that they have improved their grades,” she said.

Among the most underprivileged ethnic communities in Serbia and Europe, the Roma largely live in segregated settlements on society's fringes, facing poverty, joblessness and prejudice.

Activists have warned that the COVID-19 pandemic has further fueled the social isolation of marginalized groups and increased their poverty. Disruptions of regular schooling due to the virus lockdowns have made it even harder for Roma children to stay in the system.

At the GRUBB center in Belgrade's Zemun district, several children could be seen working with young instructors in an improvised classroom. The girls from "Pretty Loud" teach at music and dance workshops run by GRUBB, which was established in Serbia in 2006.

Diana Ferhatovic, 18, first came to the center four years ago, initially seeking help with school lessons before joining the music program and finding her way into “Pretty Loud.” Their performance in London last March — just as the COVID-19 pandemic was starting — was unforgettable, she said.

“I had a kind of positive jitters, we all did at first, the whole group,” Ferhatovic said. “Then we blew them off their feet.”

“One Good Thing” is a series that highlights individuals whose actions provide glimmers of joy in hard times — stories of people who find a way to make a difference, no matter how small. Read the collection of stories at https://apnews.com/hub/one-good-thing

This story was first published on June 22, 2021. It was updated on June 24, 2021, to correct the name of the festival the band appeared in. It was Women of the World, not Women of the Year.