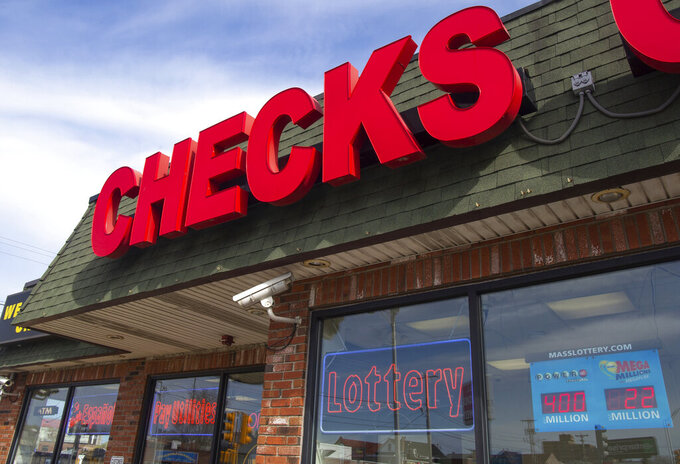 Garrett Adamtsev, ASSOCIATED PRESS
All Checks Cashed in Everett, Mass., is seen, April 21, 2022. All Checks Cashed is one of nearly 150 businesses licensed by the state of Massachusetts to cash checks and sell lottery tickets. Check cashers sold nearly $36 million in lottery products from 2017 through 2020. (Garrett Adamtsev/Boston University/The Howard Center for Investigative Journalism via AP)

At All Checks Cashed in Everett, Massachusetts, a red neon sign beckons customers to cash their checks, pay utilities and try their luck with scores of lottery tickets.

Glittering, multicolored scratch tickets on a wall behind the cashier’s station tempt customers — most without a traditional bank account — ready to pay steep fees to quickly get cash and maybe then try their hand at winning millions.

All Checks Cashed is one of nearly 150 businesses in Massachusetts currently licensed by the state Division of Banks to cash checks for a range of fees. Check cashers collectively sold nearly $36 million in lottery products across the state from 2017 through 2020, according to state records.

Dozens of other Massachusetts businesses not licensed as check cashers but with names strongly suggesting they offer check-cashing services — such as Alltown Check Cashing in Quincy and Plaisance Check Cashing in Dorchester — sold more than $7 million in lottery products during the same time period, state records show.

Licensed check cashers are frequently located in low-income Hispanic communities where most residents have a high school diploma or less, U.S. Census data shows. The businesses have long been criticized for preying on the poor and those lacking access to traditional financial services.

Check casher lottery sales are a small fraction of the billions generated each year in Massachusetts through ticket purchases. But in a state where six out of every 10 people play the lottery, an alluring mix of quick cash and lottery games poses a dangerous financial risk for customers, said former Massachusetts Inspector General Gregory W. Sullivan.

Lotteries are nothing more than “government-sponsored gambling,” Sullivan said.

Since its establishment in 1971, the Massachusetts lottery has generated $137 billion in revenue and awarded over $96 billion in prizes, state records show. To draw customers, the state Lottery Commission says 72% of lottery revenue goes to prize payouts.

Massachusetts residents pay more per capita on lottery tickets than individuals in any other state, according to a study conducted in 2017 by LendEDU.

“Check-cashing stores are the quintessential example of a magnet to low-income people … people who are on their last dollars and they need money now to pay the rent, buy food,” said Sullivan, now director of research at the Pioneer Institute, a nonprofit government accountability organization in Boston. “They are at the end of the financial line.”

“People participate in the lottery with stars in their eyes and hope that it’ll make them rich when they’re spending their hard-earned money,” Turchinetz said. “The chances of hitting the lottery are probably smaller than the chances of getting hit by lightning.”

In 1997, Massachusetts legislators proposed but failed to pass legislation that would ban Keno at check-cashing stores. That same year, a study by the Division of Banks showed individuals using check-cashing services paid considerably more in fees than those who used traditional banks.

“My belief was that people who were using check-cashing services may have been people who didn’t have access to banking services or might be members of the immigrant community,” said Morrissey, now the Norfolk County district attorney. “It didn’t make sense to me to make it that readily available.”

Keno, first authorized for play in Massachusetts in 1993, has emerged as a lucrative lottery product. From 2017 through 2020, Massachusetts Keno winners reaped over $553 million in prizes, state records show.

State law requires that check cashers obtain a license to operate from the Division of 2017 Keno claimsBanks. The licensees must renew their license each year.

Eight check-cashing store owners and managers contacted for this story declined to speak with reporters about their lottery ticket sales.

Some businesses cashing checks and selling lottery products have been sanctioned in recent years for operating illegally.

Mayfair Foods Inc., in the Allston neighborhood of Boston, sold almost $283,000 in lottery products in 2017, sales data shows. The Division of Banks issued a cease-and-desist order in September 2017 to Mayfair Foods Inc. for cashing customer checks without a license, state records show.

In March 2020, the Division of Banks issued a cease-and-desist order to Low Price Convenience Store in Fall River for operating without a check-cashing license, state records show. The store sold $1.7 million in lottery products in 2020, lottery sales records show.

For some who frequent licensed check-cashing stores, the gamble is worth it. At All Checks Cashed in Everett, one customer recalled spending her last few dollars during the 2004 Christmas season on the lottery — only to score a rare $250,000 win.

“I had $15, and I said, ‘I’m going to put $10 in gas,’” said Yessie, a middle-aged Hispanic mother who declined to give her last name. She’d go on to spend the remaining $5 on two Mega Millions tickets purchased at a Lawrence gas station. “I was almost broke.”

While Yessie won big, that is not the case for most who gamble with the lottery.

Turchinetz called the lottery and check-cashing services financial “extractors” that undermine people’s wealth. However, she said the lottery is a game, and buyers can make their own decisions when it comes to spending their income.

“People are adults,” Turchinetz said. “They know what they’re participating in, and so it’s patronizing to suggest that you should remove them.”

“If it’s not being counted, it’s not being noticed,” Sullivan said. “I think if that is put right in the face of legislators, they could try to take action to ameliorate it.”

This story was produced by students in Boston University Professor Maggie Mulvihill’s Data Journalism class in collaboration with The Howard Center for Investigative Journalism.