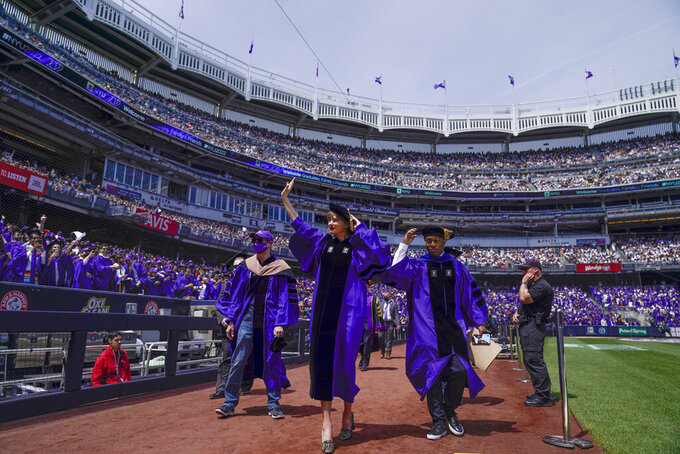 After keeping the world at arm’s length for roughly two years, the entertainment world could finally get more personal again in 2022.

Fans unfettered from pandemic restrictions flocked to film festivals and concerts to get glimpses of their favorite stars, whether Timothée Chalamet in Italy, Harry Styles in Toronto or Paul McCartney and Kendrick Lamar returning to the stage in triumphant form at the Glastonbury Festival.

Movies roared back to life: Tom Cruise provided a huge jolt with “Top Gun: Maverick,” complete with a high-flying promotional tour that spanned the globe and got even reluctant moviegoers back in theaters. Jeff Goldblum returned too, this time to the “Jurassic World” franchise that confirmed that yes, movies would find a way. That path often meant a mix of theaters and streaming, as Daniel Radcliffe and “Weird Al” Yankovic showed with their good-natured biopic of the comedian-musician.

For all the highlights, there were plenty of darker moments:

Will Smith upended the Oscars by slapping Chris Rock on live television, yielding one of the year’s most indelible images.

Johnny Depp and Amber Heard’s defamation trial provided an unsightly window into their marriage and many ugly moments as rapt television audiences watched.

Jimmy Kimmel, pretending to be unconscious on the Emmys stage, overshadowed a win by beloved “Abbott Elementary” creator and star Quinta Brunson.

But there was plenty else about which to smile, like Steven Spielberg did while walking the Oscars carpet as Rita Moreno and Ariana DeBose – actors linked in Oscars glory for their roles as Anita in wildly differently versions of “West Side Story” – shared a sweet moment on the carpet.

On fashion runways and starry premieres, elegant, vibrant and sometimes whimsical fashion was on display – patches of light after a long stretch of uncertainty and gloom.