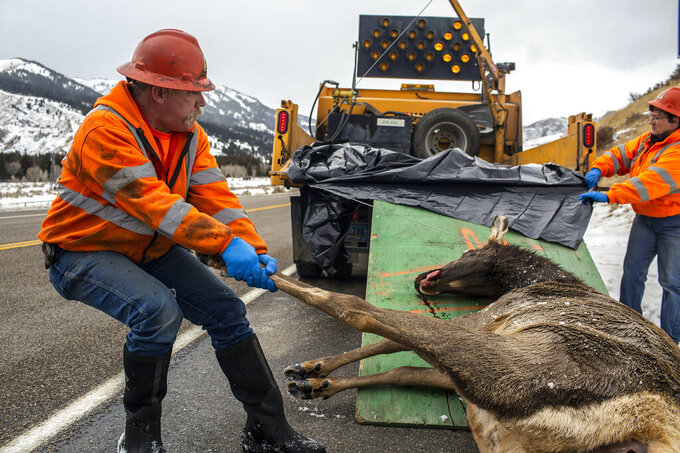 Salvaging that meat has been illegal for generations. That’s about to change.

On Monday, Wyoming Gov. Mark Gordon signed a bill into law that directs the Wyoming Game and Fish Department and Wyoming Department of Transportation to create rules governing the harvest of road-killed carcasses by July. It’s a change that gives Wyoming residents who have the misfortune of striking an animal the same liberties as people in about 30 other states, including western neighbors such as Idaho, Colorado and Montana.

“It’s really hard to guess and estimate how much interest there will be,” Game and Fish Chief Game Warden Rick King told the Jackson Hole Daily. “Montana has been averaging about 1,000 salvage permits a year.”

WYDOT averages about 3,000 reports of wildlife-vehicle collisions in a year, Chief Engineer Mark Gillett said, but he noted that not every strike is reported. In Teton County alone, the roadkill tally is typically in the 300 to 400 range when pooling data collected by WYDOT, the Jackson Hole Wildlife Foundation and Grand Teton National Park.

Sometimes a high-speed collision renders the remains inedible. But other times, collisions are glancing or lower-speed and plenty of meat is suitable for freezers, Sous vide baths, crockpots, grills — and ultimately human stomachs.

The legislation that Gordon signed off on imposes some notable restrictions. For one, whole carcasses will have to be removed, which means it won’t be legal to lop off a quarter or carve out a backstrap from an animal that met its end in a collision.

Some species are off-limits, too. Bighorn sheep, mountain goats and grizzly bears won’t be salvageable, nor will wolves in the northwest corner of Wyoming where the species is managed as a trophy game animal. Some migratory birds and any species designated as threatened or endangered also cannot be taken.

“Deer, elk, moose, pronghorn — those will be the species that folks primarily have an interest in,” King said.

Salvaged meat cannot be donated to nonprofits, according to the legislation.

Over the next few months, Game and Fish and WYDOT will draw up draft regulations for roadkill harvests that will need to be OK’d by the commissions of both agencies.

King is reviewing programs in other states and setting out to create a system that’s simple, with salvage permits available electronically. The legislation does not authorize the agencies to charge a fee for each permit, though an $8 interstate game tag might be required. That tag would be available through wardens or any one of Game and Fish’s regional offices.

Wyoming legislation that would have authorized roadkill harvesting has failed several times in the past, partly out of concern that people would intentionally strike trophy animals or that it would provide cover for poachers.

“We don’t want to create a system where people use this process to take illegal game,” King said. “It will be tough.”

At WYDOT, Gillett’s main concern is for motorist safety. Most wildlife-vehicle collisions occur at night or near dawn or dusk, and some occur on high-speed freeways or roads that lack shoulders.

Through the rule-making process, he said he is thinking of pursuing a prohibition of salvaging carcasses hit on interstate highways and perhaps also rules that will require animals to be collected during daylight hours.

Gillett also shared concerns about competition between people who want to claim a carcass and WYDOT crews whose job it is to clean up the highways.

“We may pick up two, three, four animals in one pickup,” Gillett said. “And so I don’t want somebody chasing us down trying to get their animals back.”

On the plus side, he said, the new salvage rules could cut WYDOT staffers’ workloads down a bit.