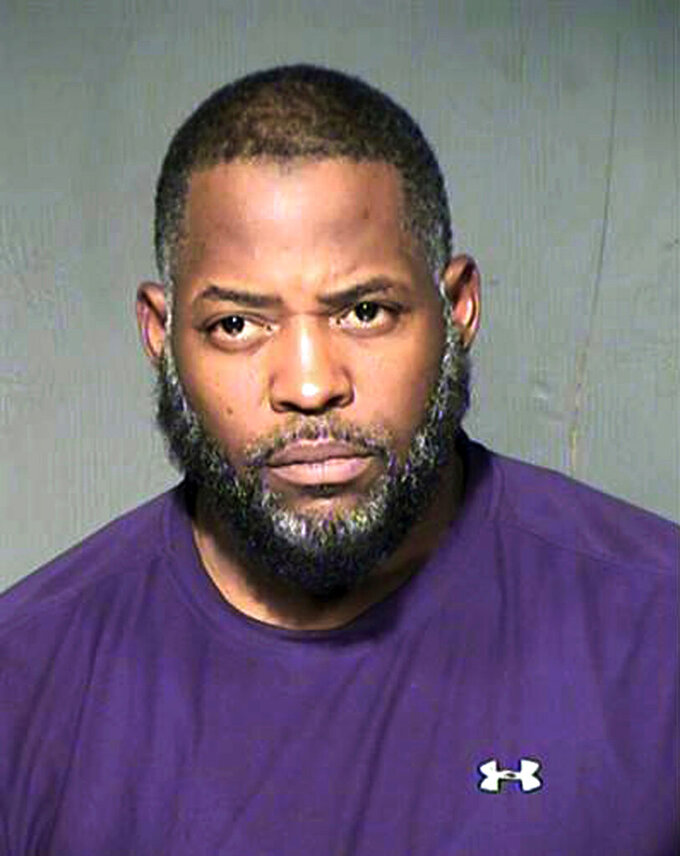 Uncredited, ASSOCIATED PRESS
FILE - This undated file photo provided by the Maricopa County Sheriff's Department shows Abdul Malik Abdul Kareem. A judge on Tuesday, Oct. 19, 2021, refused to reduce the 30-year prison sentence for the Arizona man convicted of helping to plot a 2015 attack on a Prophet Muhammad cartoon contest in suburban Dallas, even though one of his convictions was dismissed after it was discovered the FBI had withheld surveillance video at his trial. (Maricopa County Sheriff's Department via AP, File)

PHOENIX (AP) — A judge has refused to reduce the 30-year prison sentence for an Arizona man convicted of helping to plot a 2015 attack on a Prophet Muhammad cartoon contest in suburban Dallas, even though one of his convictions was dismissed after it was discovered the FBI had withheld surveillance video at his trial.

Attorneys for Abdul Malik Abdul Kareem, who was resentenced Tuesday in response to the dismissal of the charge, had asked for a 7½-year prison term. But U.S. District Judge Susan Bolton declined to shave any time off his sentence for his convictions related to the attack on the anti-Islam event in Garland, Texas.

Kareem, an American-born Muslim convert, was convicted of conspiring to provide the guns used in the attack carried out by two friends and conspiring with both friends to provide support to the Islamic State terror group.

His friends, Elton Simpson and Nadir Soofi, were killed outside event in a police shootout. A security guard also was wounded. The contest featured cartoons that are offensive to Muslims.

Bolton pointed out the seriousness of Kareem’s remaining convictions, raised public safety concerns if he were released early and wondered whether Kareem would back away from his radical religious beliefs as he gets older.

Even though Kareem wasn’t in Texas during the attack, Bolton said jurors found Kareem knew Simpson and Soofi were planning the attack in the name of the Islamic State and instructed them on how to use and clean the guns.

Kareem’s conviction for transportation of firearms with intent to commit a felony — for which he received a 10-year prison term -- was overturned in late 2019 because of the FBI’s failure to turn over the video taken outside Simpson and Soofi’s apartment in Phoenix.

The footage showed the pair in religious clothing as they were leaving for Texas to carry out the attack. Soofi wore a handgun on his hip, and both men carried duffel bags to Soofi’s car.

The FBI didn’t turn over the video until nearly three years after the trial.

Bolton had previously ruled the government violated a requirement to turn over evidence that could be used by defendants to support their innocence or question the credibility of prosecution witnesses.

The judge, who concluded the failure to turn over the footage wasn’t an act of bad faith but rather an oversight, granted Kareem a new trial on the charge in question. Prosecutors later declined to retry Kareem on the charge.

Kareem was resentenced on his other four felony convictions, including two involving guns.

“The fact that the felony was dismissed and the government elected not to go to trial on it does not change what I feel is a just punishment,” Bolton said.

Before the new sentence was imposed, Kareem acknowledged going shooting in the desert with Simpson and Soofi the months before the attack, but maintained he was innocent.

He also said he didn’t share Simpson and Soofi’s radical ideology. “I don’t follow that,” Kareem said. “I love my country.”

Kareem’s attorneys pointed out the surveillance camera outside Simpson and Soofi’s apartment didn’t capture any footage of Kareem and argued the footage would have raised doubts at trial because it would be expected that a person serving as a trainer and motivator for such an attack would have been at the apartment to work out last-minute details.

Authorities have said Kareem watched videos depicting violence by jihadists with the two friends, encouraged them to launch violent attack to support the terrorist group and researched travel to the Middle East to join Islamic State fighters.

They said Kareem expressed his desire to strap a bomb on his body to kill nonbelievers and celebrated the 2015 attack on the French satirical magazine Charlie Hebdo in what extremists claimed was retaliation for the publication of cartoons about the Prophet Muhammad.

The camera outside Simpson and Soofi’s apartment wasn’t the first surprising disclosure made by federal authorities since Kareem was convicted in March 2016.

In the months after his trial, authorities revealed for the first time that an undercover FBI agent had exchanged social media messages with Simpson days before the attack and was sitting in a vehicle outside the Garland convention center when the attack began.

As the agent drove around Simpson and Soofi’s car, which had stopped abruptly, the attackers got out and opened fire with military-style rifles. The agent drove away and was stopped by police. Prosecutors said the information about the undercover officer was classified at the time of the trial.