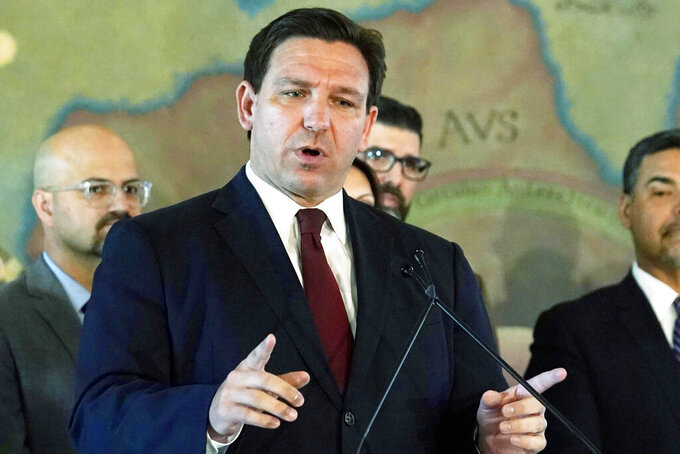 TALLAHASSEE, Fla. (AP) — Florida's new 15-week abortion ban was blocked and then quickly reinstated Tuesday after an appeal from the state attorney general in a lawsuit challenging the restriction.

Judge John C. Cooper issued the order temporarily halting the law after reproductive health providers argued that the state constitution guarantees the right to the procedure. The state appealed his order, automatically putting the law back into effect.

The legal back and forth came as abortion laws change at a frenzied pace across the country after the U.S. Supreme Court overturned Roe v. Wade, with several state laws and court cases shifting access to the procedure by the hour.

The Florida law prohibits abortions after 15 weeks, with exceptions if the procedure is necessary to save the pregnant woman’s life, prevent serious injury or if the fetus has a fatal abnormality. It does not allow exemptions in cases where pregnancies were caused by rape, incest or human trafficking.

Violators could face up to five years in prison. Physicians and other medical professionals could lose their licenses and face administrative fines of $10,000 for each violation.

The law was passed by the GOP-controlled legislature and signed by Republican Gov. Ron DeSantis this spring. It became effective Friday.

Data shows the majority of abortions in Florida occur before 15 weeks. A Centers for Disease Control and Prevention report said about 2% of the nearly 72,000 abortions reported in Florida in 2019 were performed after 15 weeks.

In a statement, the American Civil Liberties Union and abortion providers in the case said they would continue their suit against the law.

“The impacts of allowing this ban to remain in effect will fall hardest on people of color, those trying to make ends meet, immigrants, young people, and vulnerable populations like survivors of intimate partner violence,” the plaintiffs said. “Everyone deserves the ability to access the abortion care they need, and we’ll continue fighting for that right with every tool at our disposal."