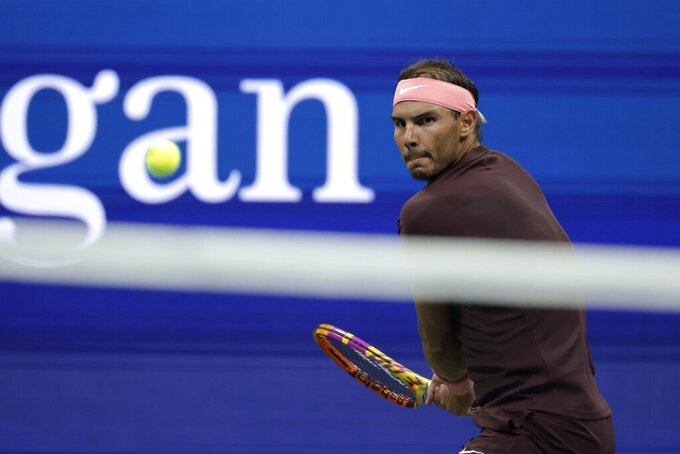 Sinner, who has improved his ranking each of the last for years, reached the fourth round for the second straight year. Sinner raced away from Nakashima in a dominant fourth set in a match between two 21-year-olds. Nakashima, though, starred at Virginia and entered the day as one of three remaining former collegiate players. Nakashima did reach the third round in each of the last three majors.

Nakashima went roughly 45 minutes between winning games after he finally made it 4-1 in the fourth. Sinner's 59th winner of the match was the final one — and only 16 of them were aces. He had 19 forehand winners.

The Italian player moved on to play Ilya Ivashka.

Danielle Collins saved three set points in the tiebreaker to knock off Alizé Cornet 6-4, 7-6 (11-9) in a match between two players who had eliminated former U.S. Open champions.

Collins defeated two-time U.S. Open champion Naomi Osaka in a straight-sets win in the opening round and Cornet beat defending champion Emma Raducanu in straight sets in the first round.

The 19th-seeded Collins hit a whopping 52 winners against Cornet and moved on to the round of 16 for the first time in her career to play Aryna Sabalenka.

Sabalenka has three wins over Collins and beat her in last year's U.S. Open.

Cornet, who played in her Open-era record 63rd straight Grand Slam, had only 17 winners.

Swiatek won the last five games of the second set and has a potential path to a U.S. Open championship that does not include any past tournament champions. With Serena Williams headed into retirement following her loss Friday, there’s not a single past champion still playing in the tournament.

Davis, who had reached the third round at the U.S. Open for the first time, needed a trainer to check on her during the first set. She took a short break but played the rest of the match without incident.

The two-time French Open champion, Swiatek came to the U.S. Open just 4-4 in her last eight matches after winning 37 straight, but has breezed through her matches in Flushing Meadows. She had 25 winners against Davis.

Rafael Nadal made it through his latest U.S. Open match in one piece and knocked off Richard Gasquet 6-0, 6-1, 7-5.

The No. 2 seed Nadal had cut himself on the bridge of his nose with his own racket in his second-round victory. There was little that slowed him down Saturday night at Arthur Ashe Stadium.

Nadal has won four of his 22 Grand Slam titles at the U.S. Open, most recently in 2019, the last time he entered the hard-court tournament. Nadal, who won his 30th night match at Arthur Ashe Stadium, said his nose felt fine during the match.

Nadal has won 34 straight sets against Gasquet and needed just over 2 hours to move into the fourth round of the U.S. Open. He'll play American player Frances Tiafoe on Monday. Tiafoe, the first American man since Mardy Fish in 2010-12 to get to the U.S. Open’s fourth round in three consecutive years.

Nadal has a 2-0 career mark against Tiafoe.

The ninth-seeded Rublev is set to play No. 7 Cameron Norrie in the fourth round.

Rublev hit only only 38 winners and had nine aces to Shapovalov's 76 winners had 23 aces. Rublev needed five match points to finally win the match. The Russian collapsed on the ground and buried his face in his hands in exhaustion as the grandstands crowd went wild following one of the best matches in the first week of the tournament.

Carlos Alcaraz has become became the youngest man since Pete Sampras in 1989 and ’90 to reach the fourth round in consecutive U.S. Opens. The 19-year-old Alcaraz knocked off Jenson Brooksby 6-3, 6-3, 6-3. Alcaraz reached the quarterfinals last year at 18.

Alcaraz was down 3-0 in the third set until he won six straight games to take off and top Brooksby. Brooksby was 20 last year when he went to the fourth round, where Novak Djokovic eliminated him in four sets.

Alcaraz, always hustling, on the move, appeared to blow out a pair of sneakers and needed a change of shoes during the match. He gave away another pair of sneakers to fans in celebration of the victory.

Alcaraz advances to play the winner of Marin Cilic vs. Daniel Evans.

Jessica Pegula reached the fourth round at the U.S. Open for the first time by beating qualifier Yuan Yue 6-2, 6-7 (6), 6-0 in Arthur Ashe Stadium.

The eighth-seeded Pegula wasted a chance to close it out when she held a match point in the tiebreaker but rolled through the third set in a half-hour.

Pegula, a 28-year-old American whose parents own the NFL’s Buffalo Bills and NHL’s Buffalo Sabres, finished with nearly twice as many winners as Yuan, 35-18.

Next for Pegula: She faces two-time Wimbledon champion Petra Kvitova on Monday with a quarterfinal berth on the line.

Pegula came into Saturday with a 0-2 record in third-round matches at Flushing Meadows, losing at that stage to Kvitova in 2020 and to Belinda Bencic in 2021.

Pegula started her Grand Slam career by going 3-8. She’s gone 22-7 since, including runs to quarterfinals at the Australian Open each of the past two years and the French Open this year.

Petra Kvitova erased a pair of match points and converted her fourth to edge Garbiñe Muguruza 5-7, 6-3, 7-6 (12-10) in a showdown between two-time major champions.

Kvitova reached the fourth round at Flushing Meadows for the seventh time. She last made it to the U.S. Open quarterfinals in 2017.

She kept coming back — after dropping the first set, after trailing 5-2 in the third, after being a point from defeat twice at 6-5.

Here’s how close this one was: Kvitova won 109 total points, Muguruza 108.

It took the new format final-set tiebreaker to determine the winner. The four Grand Slam tournaments agreed to adopt a uniform system this year, with the third sets of women’s matches and fifth sets of men’s decided by a first-to-10, win-by-two formula; the U.S. Open used to have the more traditional first-to-seven setup.

Serena Williams is gone from the U.S. Open, but the show must go on.

The third round is scheduled to wrap up Saturday at Flushing Meadows, with Grand Slam champions such as Rafael Nadal and Iga Swiatek in action at night.

Two other owners of multiple major titles will get things started in the morning in Louis Armstrong Stadium when Garbiñe Muguruza faces Petra Kvitova.

On Friday night, Williams — by far the biggest star of Week 1 at the year’s last Grand Slam tournament — lost what is expected to be the last match of her career. Ajla Tomljanovic beat her 7-5, 6-7 (4), 6-1 in front of a loud sellout crowd in Arthur Ashe Stadium.

The first match in Ashe on Saturday is due to begin at noon EDT, with No. 8 seed Jessica Pegula of the U.S. up against Yuan Yue of China.

They'll be followed by No. 3 seed Carlos Alcaraz, who is 19, against unseeded American Jenson Brooksby, who is 21.

At night, Nadal takes a 17-0 head-to-head record into his matchup against Richard Gasquet in Ashe, while the top-ranked Swiatek meets American Lauren Davis in Armstrong.