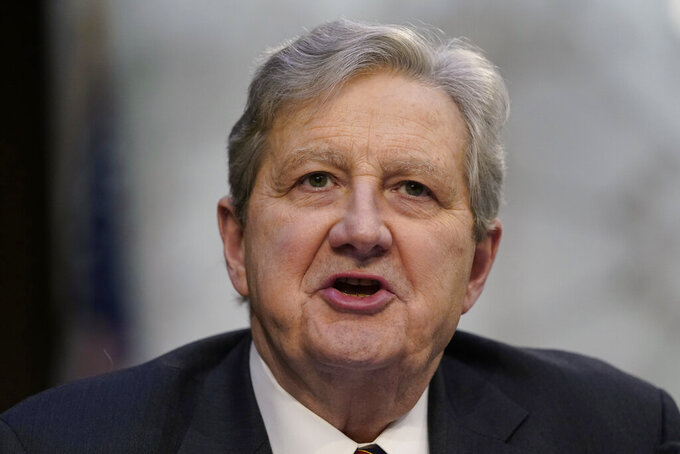 Alex Brandon, ASSOCIATED PRESS
FILE - Sen. John Kennedy, R-La., speaks during a Senate Judiciary Committee confirmation hearing of then Supreme Court nominee Ketanji Brown Jackson on Capitol Hill in Washington, on March 22, 2022. Both of the Louisiana's U.S. senators, Kennedy and Republican Sen. Bill Cassidy, say they have mulled over the option of running for governor and plan on announcing their decisions for 2023. (AP Photo/Alex Brandon, File)

BATON ROUGE, La. (AP) — Republican U.S. Sen. Bill Cassidy announced Friday that he has decided not to run for Louisiana governor next year, opting instead to focus on his work in the Senate.

“When I was elected to the United States Senate, I was given a job to represent the people of Louisiana and serve the United States of America. For the last several years, I have been working on specific legislation that is critical for the future of our state and country. I don't know if these will pass, but I know they will not pass if I decide to run for another office," Cassidy said in a written statement that he tweeted Friday. "I have chosen to remain focused on the job I was sent here to do and to see these efforts through. Therefore, I will not be a candidate for governor.”

With Cassidy not entering the race, many are waiting to see if Louisiana’s other senator will.

On Monday, U.S. Sen. John Kennedy said he was “giving serious consideration” to a gubernatorial bid and will make an announcement “soon.”

Kennedy, a Republican who has mostly provided a safe Senate vote for Republicans and been a strong supporter of Trump, easily won reelection to Congress last week, fending off 12 challengers and securing himself a second six-year term.

The politician, who was endorsed by former President Donald Trump, proved to be popular in Louisiana and on Capitol Hill, raising $36 million in his reelection bid — 10 times as much as his Democratic challengers combined.

Louisiana's highly anticipated 2023 gubernatorial race is expected to attract several strong GOP candidates because term limits prevent Gov. John Bel Edwards from seeking a third consecutive term. And though the state Legislature is dominated by Republicans, Louisiana is the only Deep South state with a Democrat for governor, opening a huge opportunity for Republicans hoping to capture the state’s top government post.

Although the election is less than a year away, so far the only person who has announced a bid is Louisiana Attorney General Jeff Landry. A conservative Republican and staunch supporter of Trump, Landry has already received an early endorsement from the Louisiana Republican Party.

Lt. Gov. Billy Nungesser confirmed to reporters that he plans to join the race. State Treasurer John Schroder told supporters in January he also plans on running. U.S. Rep. Garret Graves and state Sen. Sharon Hewitt have also indicated that they are considering.

It remains unclear who will emerge as a Democratic candidate.