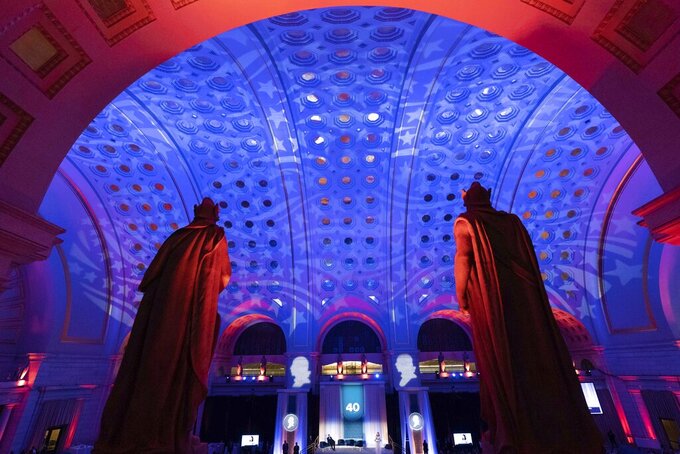 WASHINGTON (AP) — Four of the five Supreme Court justices who overturned the constitutional right to abortion showed up at the conservative Federalist Society’s black-tie dinner marking its 40th anniversary.

Justice Samuel Alito got a long, loud ovation Thursday night from a crowd of 2,000 people, most in tuxedos and gowns, when another speaker praised his opinion in June that overturned Roe v. Wade, long a target of judicial conservatives.

At a moment when opinion surveys show that Americans think the court is becoming more political and give it dismal approval ratings, the justices turned out to celebrate the group that helped then-President Donald Trump and Senate Republicans move the American judiciary, including the Supreme Court, to the right.

The Federalist Society has no partisan affiliation and takes no position in election campaigns, but it is closely aligned with Republican priorities, including the drive to overturn Roe.

Justice Amy Coney Barrett and Alito offered brief remarks that steered well clear of the court’s work, though Alito praised the Federalist Society for its success in the Trump years and hoped it would continue. “Boy, is your work needed today,” he said.

Barrett’s only allusion to the abortion case came when she responded to the crowd’s roar of approval when she was introduced. “It’s really nice to have a lot of noise made not by protesters outside my house,” she said.

Amid heavy security, Justices Neil Gorsuch and Brett Kavanaugh also were in attendance in the main hall at Washington’s Union Station, where the silhouette of James Madison, the group’s logo, was projected on the walls. Justice Clarence Thomas, the other member of the abortion case majority, was not at the dinner.

Norm Eisen, an ethics expert who served in the Obama administration and later helped draft the articles of impeachment against Trump for his first impeachment in 2019, said the justices showed a brazen disregard for ethical appearances because the organization's mission is to move the law in a conservative direction.

“While there is no legal obstacle to them showing up at the Federalist Society dinner, the appearances are awful,” Eisen wrote in an email.

But Stephen Gillers, an expert on judicial ethics at New York University's law school, said neither the ethics nor the optics of the justices' attendance troubled him.

“It’s not a political organization. It does not appear before the Court. It can legitimately assert a serious commitment to the intellectual development of the law. The fact that it is associated with particular points of view does not change that. I would say the same about the American Constitution Society,” Gillers wrote in an email, referring to a liberal legal group.

Conservative justices have a lengthy history of addressing the annual Washington meeting of the organization. Justice Antonin Scalia, who died in 2016, spoke on several occasions, as have Thomas and Alito.

Gorsuch showed up at the dinner when he was new to the court in 2017, embracing Leonard Leo, the society’s co-chairman who helped Trump vet judicial nominees. Kavanaugh delivered remarks in 2019.

Fifteen other appeals court judges chosen by Trump also are on the schedule for the three-day conference in the nation's capital.

The conference began Thursday, with a speech by Chief Judge William Pryor of the U.S. Court of Appeals for the 11th Circuit mocking the group’s liberal critics and lauding the group he said now has 65,000 members and chapters at 200 law schools.

“After 40 years, I decided it was time to look harder and investigate this mysterious and secretive network that critics charge have captured the federal judiciary, including the Supreme Court of the United States,” Pryor said.

Pryor was the author of the 11th Circuit opinion that sided with Republican Florida Gov. Ron DeSantis in ruling that felons must pay all fines, restitution and legal fees before they can regain their right to vote.

The decision reversed a ruling that gave felons the right to vote regardless of outstanding legal obligations. Joining Pryor to form a 6-4 majority were five Trump appointees.

Three of those judges, Lisa Branch, Britt Grant and Kevin Newsom, also are taking part in the conference in Washington.

The Federalist Society got its start at elite law schools when Ronald Reagan was in the White House. It was conceived as a way to counter what its members saw as liberal domination of the nation’s law school faculties.

Its influence was pronounced during the presidency of George W. Bush, when its leaders helped rally support for Senate confirmation of Alito and Chief Justice John Roberts, now seen by some critics as insufficiently conservative. The group was so successful that it spawned copycat liberal organizations.

During Barack Obama's presidency, the group provided a forum for opponents of Obama’s court choices and policies. Some of its leaders backed then-Senate Majority Leader Mitch McConnell’s refusal to act on Obama's Supreme Court nomination of Merrick Garland after Scalia died in February 2016. That political strategy paid unexpected and huge dividends for conservatives with Trump’s election, leading to Gorsuch's confirmation. McConnell also was in attendance Thursday, Leo said.

Trump’s White House years brought the group to a new level. “Our movement has grown by leaps and bounds and so has our impact,” Leo said Thursday night.

In 2017, then-White House counsel Don McGahn responded to criticism of the Federalist Society’s influence in the Trump administration.

“Our opponents of judicial nominees frequently claim the president has outsourced his selection of judges. That is completely false. I’ve been a member of the Federalist Society since law school — still am. So, frankly, it seems like it’s been insourced,” McGahn said at the group’s convention.

In a more serious vein, he said, “The fact is we all share the same vision of the judicial role, and we welcome input from many sources.”

Follow the AP's coverage of the Supreme Court at https://apnews.com/hub/us-supreme-court.