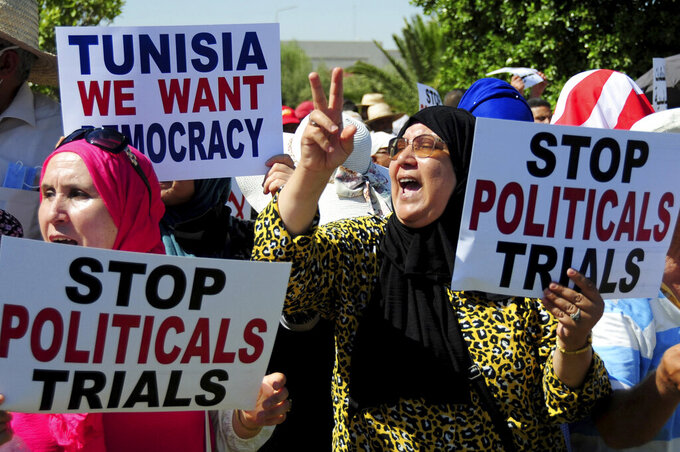 Hassene Dridi, ASSOCIATED PRESS
Supporter of the leader of the Ennahdha party Rached Ghannouchi, hold placards as they stage a protest at Tunisia's anti-terrorism unit in Tunis, Tunisia, Tuesday, July 19, 2022. The leader of Tunisia's main opposition party is due to be questioned by the country's anti-terrorism unit on Tuesday on suspicion of money laundering and terrorist financing through an association charity. (AP Photo/Hassene Dridi)

TUNIS, Tunisia (AP) — The leader of Tunisia’s main opposition party was freed after being questioned by the country’s counterterrorism unit Tuesday on suspicion of money laundering and terrorism financing through an association charity.

Rached Ghannouchi, 81, the leader of the Islamist Ennahdha party was allowed to return home after over nine hours of hearings. Critics feared that it would lead to his arrest and outside the hearing in the capital, Tunis, Ghannouchi’s supporters decried the proceedings as a sham orchestrated by authorities.

Angry demonstrators held placards reading: “No to political trials,” "Down with the putsch” and “Saied get out,” in allusion to the exceptional measures taken by President Kais Saied that he claimed were to “cleanse the country of corruption that plagues all the cogs of the state.”

Saied suspended parliament last year and seized broad powers in a move that he said was necessary to “save the country” from a political and economic crisis. This prompted criticism from the opposition, which accuses him of shunning democracy and a slide toward totalitarianism.

Ennahdha has said all these accusations are aimed at distracting attention from a July 25 referendum planned by Saied to change the constitution to augment presidential powers and reduce the role of the parliament and prime minister. The president’s critics say he is trying to legitimize a “coup.”

Bhiri was in power in the aftermath of the revolution that brought down the government of President Zine El Abidine Ben Ali in 2011 amid protests that inspired the Arab Spring movement.

The Ennahdha party published a statement on its website attributed to its president in which he denounced “the slander and shenanigans” of Saied’s presidency.

Saied and some others blamed Ennahdha in part for Tunisia’s political crisis last year. Ennahdha, which dominated parliament before it was suspended, is among the president’s fiercest critics.