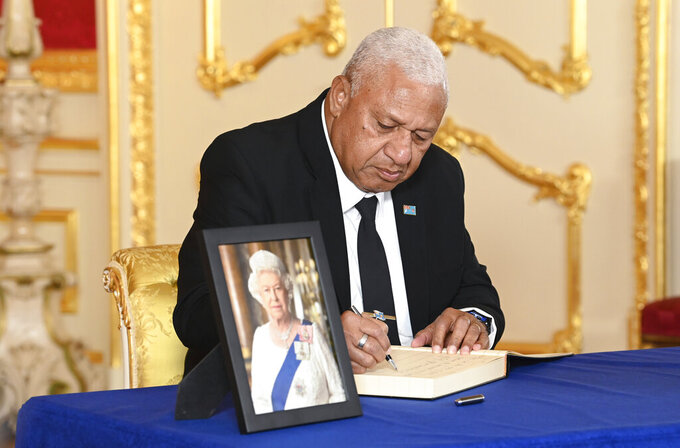 UNITED NATIONS (AP) — This year's U.N. General Assembly meeting of world leaders came on the heels of another event that reverberated internationally — the death of Britain's Queen Elizabeth II, followed by both an outpouring of tributes and sometimes bitter reflection on the colonialist empire that came to an end during her seven decades on the throne.

There were also some questions about whether the loss of the long-reigning monarch might affect the Commonwealth, a voluntary association of 56 nations that, in many cases, have historic and linguistic ties to Britain. Fourteen of them are Commonwealth “realms” — former colonies where the British monarch, now King Charles III, remains the head of state.

Some already were revisiting that relationship before the queen's death.

Barbados snipped its link to the monarchy and became fully independent last year, to felicitations from Elizabeth and Charles. The prime ministers of Jamaica and of Antigua and Barbuda said earlier this year that they intend to do likewise, and Antigua and Barbuda's Gaston Browne followed up after the queen's death by telling Britain's ITV News that he planned to call a referendum within three years.

Others have no such plans, at least for the moment. Australian Prime Minister Anthony Albanese had laid some groundwork for a potential Australian republic earlier in the year but said after Elizabeth's death that it was time to honor the queen, not change up the government. New Zealand Prime Minister Jacinda Ardern, who supports becoming a republic, said she didn't plan to take up the matter soon, noting there are many other issues on the country's plate.

So there are on the General Assembly's agenda, too, and the future of the Commonwealth didn't factor in the major speeches each country gets to make. But some did take time to remember the queen and invoked her words and example to suggest future action — or lessons for leaders.

A look at some of the remarks:

British Prime Minister Liz Truss, whom Elizabeth formally appointed two days before her death, said Elizabeth “symbolized the post-war values” underlying the U.N. and recalled a speech that the queen gave at the General Assembly in 1957.

“She warned that it was vital not only to have strong ideals but also to have the political will to deliver on them. Now we must show that will. We must fight to defend those ideals. And we must deliver on them for all our people,” Truss said.

A CALL TO ACTION

Mauritius is a former British colony off the southeast coast of Africa, and the two countries remain at odds over the Chagos Islands, which the U.K. continues to control. Former residents have waged a years-long legal fight for the right to return to the archipelago after Britain expelled them in the 1960s and 1970s to make way for a military base.

Mauritius' prime minister, Pravind Jugnauth, urged Truss' new government to resolve the matter by placing itself “on the right side of history,” pointing to Elizabeth's “values and principles."

“What more fitting tribute to the memory of this great monarch who dedicated her life to service, to uphold values of democracy, human rights and international law, sovereignty and territorial integrity than to bring this history to an end and to do so in a manner that respects sovereignty, matters of security, environment and the fundamental rights of human beings?” he asked.

Papua New Guinea is one of the far-flung “realms” where the U.K. monarch is still head of state, and Prime Minister James Marape closed his General Assembly remarks with an homage to the sovereign whom he said islanders affectionately dubbed “Mama Kwin.”

“Our beloved queen personified grace, dignity, honesty, humility, tolerance of others, forgiveness and all other Christian virtues and lived 70 years of consistent, unfailing life of public service — some lessons we leaders of the world must learn to practice,” he said.

The prime minister of another “realm,” Manasseh Sogavare of the Solomon Islands, called her “an inspiration, a figure of stability, dignity, and grace.”

Fijian Prime Minister Voreqe “Frank” Bainimarama recalled Elizabeth stepping aside from greeting other guests to welcome him at a reception a few years ago — and welcome his country back to the Commonwealth. Fiji was suspended in 2006 after Bainimarama seized power in a coup, then reinstated after elections in 2014, when he won his first term as premier.

The queen's welcome “was a simple gesture but a special affirmation of all that we had worked to achieve for Fiji’s new and true democracy,” said Bainimarama, whose country's head of state is a president, not the monarch.

A SHOUT-OUT FOR CHARLES

The colonial history of Gabon and Togo rests with France, not Britain, and the two African nations are members of French-speaking countries' own own affinity group, L’Organisation Internationale de la Francophonie. But the countries also joined the Commonwealth this past June.

At the first General Assembly since then, Gabonese President Ali Bongo Ondimba hailed Elizabeth's “respect, friendship, and wise counsel to many independent nations around the world, small or large” — and added kind words for the new king. Bongo saluted Charles' concern about the environment, climate change and biodiversity.

Some other Commonwealth members, from Dominica to Malawi, took time to express condolences and pay tribute to the queen. So did a few countries that aren't part of the group, including the Central African Republic, Madagascar and the Dominican Republic.

Perhaps the most fulsome homage came from Hungarian President Katalin Novak, who repeatedly quoted a 2010 speech in which Elizabeth told the General Assembly about leadership, the work of the U.N. and what she saw as the challenge facing the world body: to continue showing “clear and convening leadership” without losing sight of its work to foster security, prosperity and dignity for people around the world.

Novak exhorted to assembly to “regain our ability to distinguish between the essential and the irrelevant, the important and the unimportant, reality and fiction."

“We bade farewell to an exceptional monarch whose life was steeped in service to peace,” she said. “We owe it to the people and to her memory to make our decisions in the same spirit.”

This version has been updated to correct the spelling of the New Zealand prime minister’s first name.