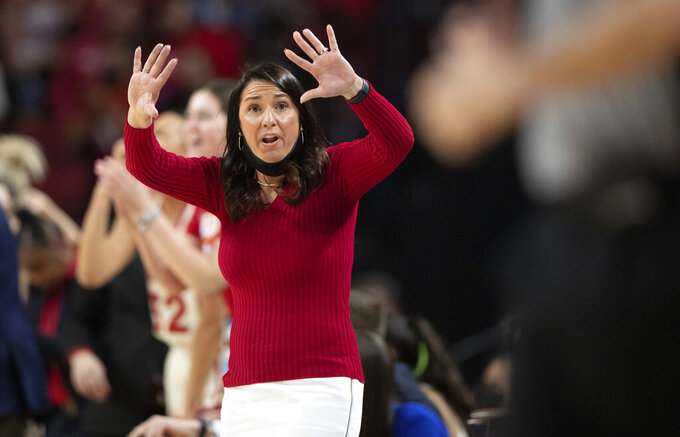 Rebecca S. Gratz, ASSOCIATED PRESS
FILE - Nebraska head coach Amy Williams yells from the sideline during the second half of an NCAA college basketball game against Indiana on Monday, Feb. 14, 2022, in Lincoln, Neb. The women's basketball teams in Nebraska are showing it's not just a volleyball state. The Nebraska Cornhuskers of Lincoln and Creighton Bluejays of Omaha both entered the season ranked in the Associated Press preseason Top 25. (AP Photo/Rebecca S. Gratz, File)

OMAHA, Neb. (AP) — Move over, volleyball. The women in the state of Nebraska can play high-level basketball, too.

The No. 21 Creighton Bluejays of Omaha and No. 22 Nebraska Cornhuskers of Lincoln won their openers on Monday after appearing together in the Associated Press preseason Top 25 for the first time.

The two schools are longtime fixtures in the American Volleyball Coaches Association rankings. Nebraska is No. 4 and Creighton is No. 12 this week.

Texas, with the Longhorns and Baylor, is the only other state with two Division I schools ranked in both sports.

“There’s just something very special going on in women’s athletics in the state of Nebraska,” Cornhuskers basketball coach Amy Williams said, “and we’re glad to be able to share in that.”

Creighton has two Nebraskans. Morgan Maly is a starter who was last season's Big East sixth woman of the year and Jayme Horan is one of the first players off the bench.

The Huskers, who opened with a 100-36 win over Omaha, were 24-9 last season and a No. 8 seed for their first NCAA Tournament appearance since 2018. They lost to Gonzaga in the first round.

The Bluejays, who won 78-69 at No. 23 South Dakota State on Monday, were 23-10 and the surprise team of last season's national tournament. As a No. 10 seed, coach Jim Flanery's team knocked off Iowa and Iowa State on their way to the Elite Eight, where they lost to eventual national champion South Carolina.

“First and foremost, I think there's really a surge right now in basketball,” Creighton volleyball coach Kirsten Bernthal Booth said. "Volleyball has been kind of the marquee girls sport in our state, and that’s led to success at Nebraska and our success.

“It's great to see the success ‘Flan’ obviously had last year, and then Amy’s doing a great job at Nebraska. As I get older in my career, I lean into wanting everyone in the area to be great.”

Basketball has a long ways to go to overtake volleyball in popularity in the state. The Huskers have won five national titles and are the Division I leader in all-time wins. Creighton has been a regular in the NCAA volleyball tournament for a decade.

“I joke with Kirsten about how much in-state talent there is in volleyball and how all my friends’ athletic daughters play volleyball, which is just an observation,” Flanery said. “Kirsten would say there’s room for both.”

Bernthal Booth's daughter plays both. Reese Booth won a state championship in basketball last year and this fall signed a letter of intent to play volleyball at Northern Iowa.

Flanery said Creighton and Nebraska's presence in the basketball rankings and postseason success will naturally raise the sport's profile.

“I think it's good for high school kids to see that we're not just a volleyball state on the women's side,” Flanery said.

“Hopefully there’s some momentum so this might last a while."