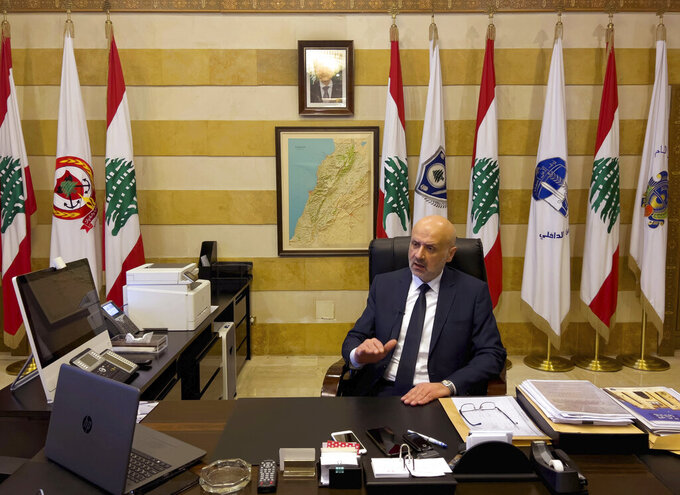 Hussein Malla, ASSOCIATED PRESS
Lebanon's Interior Minister Bassam Moulawi, speaks during an interview with the Associated Press at his office, in Beirut, Lebanon, Tuesday, Nov. 23, 2021. Moulawi said on Tuesday every delay in resolving the crisis with Gulf nations threatens to affect the lives of more Lebanese already reeling from the impact of a massive economic crisis. (AP Photo/Hussein Malla)

BEIRUT (AP) — Lebanon’s interior minister said Tuesday that every delay in resolving the diplomatic crisis with Gulf nations threatens to affect the lives of more Lebanese already reeling from a massive economic crisis.

Bassam Mawlawi said resolving the crisis begins with the resignation of the Cabinet minister whose comments sparked the ire of Saudi Arabia, calling it long overdue.

Saudi Arabia, a traditional ally of Lebanon, withdrew its ambassador and asked the Lebanese envoy to leave last month following televised comments by George Kordahi, Lebanon’s information minister. Kordahi said the war in Yemen was futile and called it an aggression by the Saudi-led coalition.

Yemen’s war began with the 2014 takeover of Sanaa by the Houthi rebels, who control much of the country’s north. The Saudi-led coalition entered the war the following year determined to restore the internationally recognized government and oust the rebels.

Kordahi recorded the comments weeks before he was named minister and has refused to apologize or step down despite appeals from many, including the prime minister. Lebanese officials have said his remarks do not represent official government views.

The Saudis have also banned Lebanese imports, affecting hundreds of businesses and cutting off hundreds of millions in foreign currency to Lebanon, which is already facing a major economic meltdown.

“We should not wait until the noose is tightened around all the Lebanese people’s necks so that we take measures that we could have taken earlier and that could have been easier,” he said. "I think the delay makes the crisis more complicated.”

Mawlawi said Kordahi is not resigning because he needs the approval of his political backers. Kordahi is supported by the powerful Iran-backed Hezbollah group, which has criticized Saudi Arabia's pressure on Lebanon, calling it “extortion.”

Saudi officials said the problem with Lebanon is bigger than Kordahi’s comments and is rooted in a system that has allied itself with Iran.

The standoff has paralyzed the government, which has been unable to convene since Oct. 12 amid reports that ministers allied with Hezbollah would resign if Kordahi goes.

The government is also embroiled in another crisis triggered when Hezbollah protested the course of the state's investigation into the Beirut port explosion last year. Hezbollah has criticized Tarek Bitar, the judge leading the investigation, saying his probe was politicized, and called on the government to ensure he is removed.

Local media have suggested that mediators seeking an end to the standoff are negotiating a tradeoff between Bitar and Kordahi. If Kordahi goes, Bitar too must go, according to reports.

“The port blast is a legal judicial issue and it is not legally appropriate to make it part of a swap,” Mawlawi, himself a judge, said. The investigation “is in the judiciary’s hands. Laws must be implemented.”

Prime Minister Najib Mikati can’t dismiss Kordahi without the approval of two-thirds of the Cabinet. Mawlawi called on Mikati to do so if he can secure the votes.

Saudi Arabia took the first punitive measures against Lebanon last spring after it announced it had seized over 5 million pills of the amphetamine drug Captagon hidden in a shipment of pomegranates coming from Lebanon. Then, it banned the import or transit of Lebanese produce through its territories. Two suspected smugglers were arrested in May.

Mawlawi said he has already ordered tighter security measures at border crossings to prevent smuggling and said an investigation into the smuggling ring continues.

“We must reach a conclusion in cooperation with the Saudi authorities to figure out all the details of the issue that threaten the security of Saudi Arabia and Arab communities,“ he said.

Mawlawi said the economic crisis in Lebanon — described by the World Bank as one of the world's worst in the last 150 years — has taken its toll on the country's security forces. The national currency and the salaries of public servants lost more than 90% of their value over the last two years amid soaring inflation and a shortage of basics.

At least 396 police and four officers have left the force, estimated at around 27,000 membes, since the crisis began, according to the Interior Ministry's latest figures.

“We are trying to stop these resignations ... but we need to fix the causes,” Mawlawi said, appealing for more international assistance to the internal security forces.