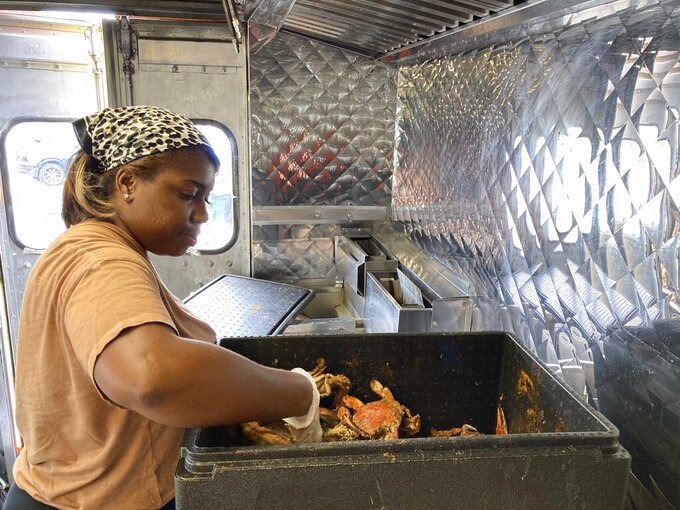 WILMINGTON, Del. (AP) — With her cellphone wedged between her shoulder and her ear, Yolanda Parson fielded frequent calls from eager customers as she packed large brown paper bags with dozens of crabs coated with her signature — and secret — spice blend.

A bottle of the classified crab seasoning stood behind her as she smiled and joyfully greeted family, friends and acquaintances who had come to the grand reopening of her food truck, Crab Cravers. The celebration marked the one-year anniversary of Parson’s business, which began last July as a small foldout table, four burners and herself.

On July 18, she celebrated the opening of her orange-and-yellow truck, which sits in front of Baul’s Auto Center at Northeast Boulevard and East 16th Street in Wilmington. The parking lot in front of the shop was a bustling affair — complete with a free cookout, water ice and a bouncing castle.

“I was just a stand and a couple pots,” Parson said. “By myself, cooking and sweating, but I did it and they were coming left and right for my crabs.”

Red hand-painted plywood signs with the word “CRABS” splayed across them in yellow paint attracted passing drivers as dozens of people placed their orders to get a taste of Parson’s food, which she described as “the best crabs in the city.”

Parson, also known as the “neighborhood crab lady” to regulars, gracefully weaved through her small, metal food truck hallway — taking and fulfilling orders as the air inside became saturated with spiced steam from the tubs of piping crabs behind her.

In the midst of the COVID-19 pandemic, Parson began her business partly out of a desire to be her own boss and partly because she wanted to devote herself to something she loved to do.

“I don’t get freedom working for somebody else,” Parson said.

While she had some reservations about starting a business during the pandemic — when numerous restaurants were closing down — she persevered because she knew that “people love crabs.”

With no previous experience selling crabs, Parson described the past year as just one long learning experience. She networked with others in Facebook crab groups and began to connect with different people to build her business.

Before she started selling them, Parson would crack down on crabs almost every day. Friends and nearby residents would often probe her for her thoughts on the newest crab restaurants to open up before venturing out to try them out themselves.

Parson grew up in Wilmington’s Eastside neighborhood and created the business to provide the city with high-quality crabs, which she felt were absent in the community. Behind the truck, Parson’s cousin can be found boiling the thick, meaty blue crabs — sourced from Baltimore, Virginia and Georgia — in a tall silver pot.

As last Sunday’s event wound on, Parson continuously — and figuratively — put out small fires. From empty propane tanks to malfunctioning burners, she often rushed in and out of the truck to keep things running smoothly.

In the five months since she purchased the truck, she has mostly been doing everything on her own. While relatives sometimes pitch in, it’s clear she mastered the art of multitasking as she takes someone’s order while filling a bag full of crabs only to pivot and talk to customers on the phone.

“These come right off the pot and then go right out the door because people start lining up,” Parson said as she motioned to a fresh batch of seasoned crabs behind her.

After an initial slow start, Crab Cravers really took off when Parson developed several signature items that set her apart from other establishments. In addition to the spice blend, Parson created a signature butter dipping sauce and a thirst-quenching Cravers homemade punch to wash it all down.

In addition to being the neighborhood crab lady, Parson is the mother of a 5-year-old boy and is an aspiring singer. She even created and sang an original theme song for Crab Cravers, which features its location and phone number — in song form, of course.

In the future, Parson hopes to expand her business and start her own restaurant.

But for now, she keeps traversing the tiny hallway, waiting for more customers to line up, for the next fresh tub of crabs to be brought in, and for her phone to ring.

Crab Cravers can be found only on Saturdays and Sundays at 1600 Northeast Blvd. in Wilmington. Be sure to get there early before they run out.