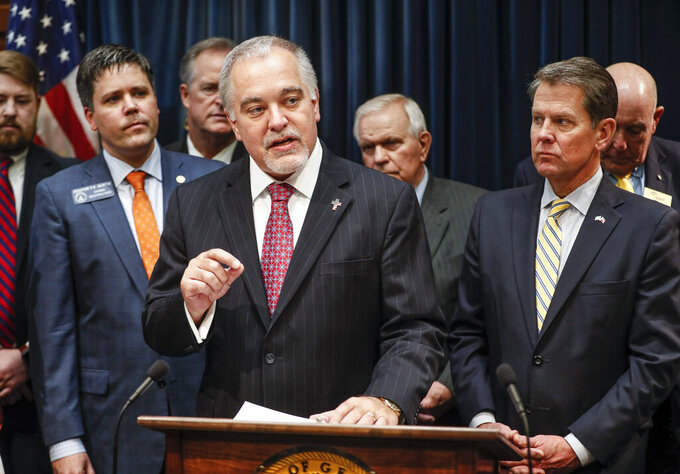 ATLANTA (AP) — Georgia's Republican primary for state superintendent of schools is filled with sharp clashes over which of the two candidates performed worse at the job, while the four Democrats seeking the post say they want to steer the state's school system away from the Republican-driven culture-war clashes that dominated much of this year's legislative session.

GOP primary voters will chose between current Superintendent Richard Woods, who has won the office in the past two elections, and John Barge of Rome, who served a term as superintendent before Woods.

Democrats seeking to end Republican control include Jaha Howard, a Cobb County school board member and pediatric dentist; Currey Hitchens, a Decatur lawyer and former teacher; Alisha Thomas Searcy of Marietta, a former lawmaker and charter school superintendent who ran unsuccessfully for superintendent in 2014; and James Morrow, a Clayton County teacher who lives in Austell.

A runoff, if necessary among Democrats, would be held June 21.

Woods has worked closely with Gov. Brian Kemp and the two have sought to de-emphasize standardized testing and remove the influence of the Common Core standards on what Georgia expects students to learn.

They have also been lockstep in giving teachers a raise. Woods' approach through the COVID-19 pandemic has been to voice trust in teachers, even as state test scores showed students learned less than in the years before.

More recently, Woods has backed Kemp's efforts to ban teaching about “divisive” racial concepts in the classroom, codify a parental bill of rights and to make it easier for parents to seek to have books removed from schools.

“I think looking at legislation, it was the right balance, this was a time in which we definitely needed to have that transparency," Woods said during a May 3 debate with Barge hosted by the Atlanta Press Club. “We have to respect the role of parents to govern their child’s education.”

“Can you point to a single initiative you have implemented in eight years that has helped improve student achievement in Georgia?” Barge asked during the debate.

Barge also says Woods is not stopping schools from allowing transgender children to use the bathroom of the gender they identify with. Barge said his daughter enrolled her children in private school in part because she got a public school enrollment form asking whether her children were “male, female or other.”

“She decided she did not want to send her children to school to be indoctrinated into that kind of thing,” Barge said.

Woods says he undid harmful Barge initiatives including too much high-stakes testing and a teacher evaluation system that was too penal.

Democrats have different visions, saying they want to promote equity and reach out to groups that feel neglected.

Howard touts his time on the Cobb County school board, saying he has succeeded despite the board being riven by partisan conflict. He seeks to improve reading among young children from birth to third grade by mobilizing schools and community groups.

Searcy argues that she's best qualified, saying 12 years in the state House taught her to work with Republicans and noting her experience as former leader of Ivy Prep, an all-girls Atlanta charter school serving grades K-8.

“I’m a former superintendent who has led schools before I’ve hired principals, turned around our teacher retention rate and I’ve turned around schools," Searcy said during the Democrats' separate debate.

Hitchens said she's running in part because she's alarmed by Republican efforts to restrict what teachers can say about race, saying she wants “to let teachers teach the truth.” She touts one-on-one tutoring to help students who fell behind during the pandemic. Having represented students in discipline proceedings, Hitchens wants schools statewide to seek restorative justice. She says it's wrong to suspend or expel students and "deny them education as a punishment.”

Morrow is focused on stronger discipline and teaching students to read better.

The Democratic primary has its share of contention. Others have attacked Howard for messages he once posted on Facebook that called being gay sinful, questioned whether public schools had a “homosexual agenda," and opposed abortion. Howard deleted the messages during a failed state Senate race in 2017 and said May 3 that “Facebook messages from 10 or 15 years ago” are not part of his record. Searcy said voters should reject Howard because of his "reputation of being combative, being an activist and never getting anything done.”