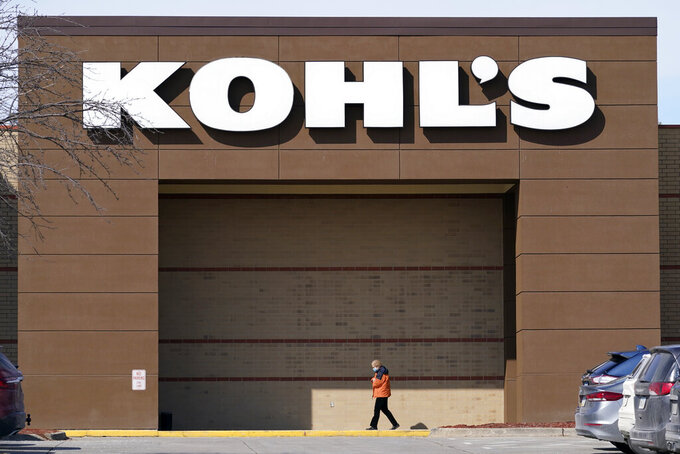 Charlie Neibergall, ASSOCIATED PRESS
FILE- A woman arrives at a Kohl's store in West Des Moines, Iowa on Feb. 25, 2021. Kohl’s delivered strong results for the fiscal third quarter, Thursday, Nov. 18, as shoppers go back to buying dresses and other goods that fell to the bottom of the shopping list when the pandemic struck.(AP Photo/Charlie Neibergall, File)

NEW YORK (AP) — Department store chains Macy's and Kohl's delivered strong results for the fiscal third quarter as shoppers go back to buying dresses and other goods that fell to the bottom of the shopping list when the pandemic struck.

Macy's and Kohl's swung to a profit during the quarter as sales surged. Both companies raised their annual financial outlooks.

Macy's and Kohl's join a slew of other retailers posting strong sales as they grapple with surging costs and snarled supply chains heading into the holiday shopping season. They're rerouting shipping to less congested ports to get goods onto shelves. Still, Kohl's said the delays have disproportionately affected its women's business, and the department store is working to address the issue. Kohl's said some of the late merchandise may have to be packed up and used for another season. Both retailers said they don't think supply chain issues will be resolved until later next year.

Retailers like Macy’s are also paying higher wages and expanding benefits for its workers amid a tight labor market. Earlier this month, the department store said that it would a pay minimum of $15 per hour for new and current workers by May.

Macy's CEO Jeff Gennette also told investors on its earnings call that it has hired consulting firm AlixPartners to evaluate whether the retailer should spin off its e-commerce division from its stores, similar to what Saks Fifth Avenue did earlier this year. The move comes as it is under pressure from activist shareholder Jana Partners to split off the division to create better valuation.

Macy's earned $239 million, or 76 cents per share, for the three-month period ended Oct. 30. Adjusted earnings were $1.23 per share, easily topping Wall Street per-share projections of 31 cents, according to a survey by FactSet.

The company lost $91 million last year during the same period.

Online sales increased 19% compared from the year-ago period, and rose 49% compared with the same quarter in 2019.

The New York-based company added 4.4 million new customers into the Macy’s brand, a 28% increase over 2019.

Macy's was able to increase inventory 19.4% compared with last year's third quarter, navigating shortages and slowed supplies as the U.S. economy emerges from a downturn caused by the pandemic.

Macy's said that it will launch a third-party marketplace that will expand its assortment of product categories and brands.

Kohl's, based in Menomonee Falls, Wisconsin, said it earned $243 million, or $1.65 per share, for the three-month period ended Oct. 30. That compares with a loss of $12 million, or 8 cents per share, last year.

The company raised its full-year earnings-per-share guidance to between $7.10 and $7.30, up from its previous forecast of $5.80 per share to $6.10 per share. Analysts were expecting $6.14 per share, according to FactSet.

The launch of Sephora shops at Kohl's is getting a good response so far, with 25% of those customers new to the retailer. They are also younger and more diverse.

During the earnings call with analysts, Kohl's CEO Michelle Gass said that overall inventory is down 25% compared to 2019; women's inventory is down even more. The company had aimed to have levels below 2019 but they're still down lower than planned. On the other hand, inventory in activewear, which is enjoying strong sales, is in “great shape," she said.

Gass told The Associated Press that inventory delays were a “missed opportunity." She said the customers are loving the overall rejuvenation of the women's business including brands like Lauren Conrad, but “we just need more of it.''

This story has been corrected to show that Kohl's overall inventory is down 25% and women's even more, instead of just women's inventory down 25%.