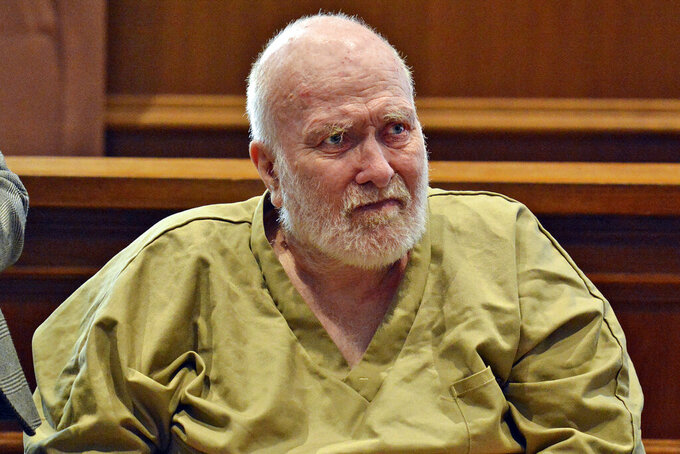 Chris Christo, ASSOCIATED PRESS
FILE — In this June 6, 2018 file photo, convicted child rapist Wayne Chapman appears for his arraignment in Ayer, Mass. Chapman, who said he sexually assaulted up to 100 victims, has died at a Connecticut nursing home, according to lawyers involved in the cases. He was 73. (Chris Christo/The Boston Herald via AP, Pool, File)

ROCKY HILL, Conn. (AP) — Wayne Chapman, a child rapist from Massachusetts who said he sexually assaulted as many as 100 victims, has died at a Connecticut nursing home, according to lawyers in the cases. He was 73.

Chapman died of natural causes Wednesday evening, his Boston lawyer, Eric Tennen, said. He was living at a nursing home in Rocky Hill, just south of Hartford, according to Connecticut's sex offender registry.

Chapman was convicted in 1977 of luring young boys into the woods by pretending he was searching for his missing dog and sexually assaulting them, Massachusetts court records say. A court found Chapman had at least 50 victims, and Chapman had said he raped as many as 100 children, said Wendy Murphy, an attorney for some of the victims.

His prison sentence ended in 2004, but Massachusetts officials civilly committed him for another 15 years under a state law on people deemed “sexually dangerous.” He was released from state custody in 2019, after Massachusetts' highest court ruled he could no longer remain committed because mental health professionals determined he was not sexually dangerous.

His release outraged his victims, whose lawyers unsuccessfully tried to keep him committed.

Authorities said Chapman also was a person of interest in the 1976 disappearance of 10-year-old Andy Puglisi, of Lawrence, Massachusetts.

Melanie McLaughlin, a childhood friend of Puglisi, told the Boston Herald that she was sad and angry Thursday.

“Hopefully there’s more justice on the other side than there was here,” McLaughlin said.

Tennen, Chapman's lawyer, said Chapman had been bedridden since his release and posed no danger to the public.

“I’ve never defended what he did,” he said. “He committed horrible acts and caused pain that has reverberated for decades.”