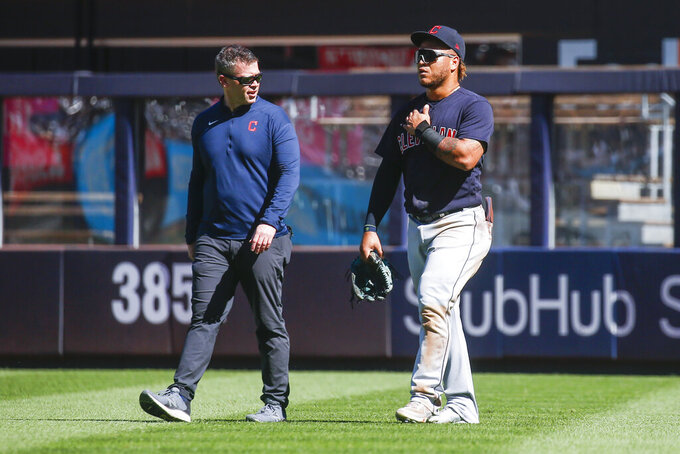 NEW YORK (AP) — Gerrit Cole stumbled when the New York Yankees needed an ace-like outing, allowing seven runs over 5 2/3 innings in a costly 11-1 defeat to the Cleveland Indians on Sunday.

After losing consecutive games by eight or more runs for the first time since May 2008, New York dropped 1 1/2 games behind Toronto for the second AL wild card and 2 1/2 games back of wild card leader Boston with 12 games left.

Harold Ramírez hit a pair of two-run singles and drove in a career-high four runs before leaving as a precaution with a right shoulder injury. Ramírez banged into the right-field wall in the third inning on a drive Gio Urshela that hit the top of the fence and bounced over for a home run.

José Ramírez hit his 35th homer, had four hits and reached five times for Cleveland, which scored double-digit runs for the third time in four games.

“He’s such a good hitter,” Cleveland manager DeMarlo Hale said, “There’s a consistency to him. He will have ups and downs but he’s a big threat in the middle of the lineup.”

The Yankees were outscored 22-4 in the final two games of a series against a team with a losing record,. New Yorl is 7-15 since a 13-game winning streak, tied with 102-loss Baltimore for the worst record in the AL over that span.

It was the third time since 2016 New York allowed double-digit runs in consecutive games.

“We got to do better than this,” manager Aaron Boone said. “That’s an awful couple of days out there,m and we got to get past it in a hurry and we got to play well. We got to go and play a complete game like we did Friday night, but we can’t do that every two, every three games. We got to play really good baseball if we’re even going to think about being where we want to be.”

Cole was so frustrated that during a third-inning mound visit with pitching coach Matt Blake, he turned and saw the scoreboard showed Toronto and Boston leading, then was caught by a television microphone uttering a profanity.

“I don’t recall what I was looking at. It was probably nothing,” Cole said.

Cole was making his second start since cutting short an appearance because of a tight hamstring. He hit Bradley Zimmer near a knee with an 0-2 pitch leading off and gave up two-run hits to Harold Ramirez on soft contact, an opposite-field single down the first-base line in the first and a bloop that fell between center field Aaron Judge and left fielder Brett Gardner in a three-run third.

“The first four runs are all on soft contact,” Boone said. “I actually thought he was throwing the ball well there, and then you’re obviously up against it and down a little bit and he gave up a couple of home runs, but certainly his line’s not indicative of how he threw the ball. So, yeah, frustrating.”

Cole is to pitch Friday in Boston and the following Wednesday in Toronto, setting him up to pitch in the regular-season finale against Tampa Bay or a wild card game.

New York grounded into two more double plays and with 143 is second in the major leagues, one behind Washington. The Yankees made two more errors and are fourth in the big leagues with 94.

Roberto Pérez added an RBI single and Cole crouched and hung his head in frustration — and homered.

Yu Cheng contributed an RBI single in the seventh after third baseman DJ LeMahieu allowed Myles Straw’s grounder to go under his glove. Cleveland scored its final run when first baseman Anthony Rizzo fumbled a grounder by Ernie Clement for an error.

“This was a good day, I get to enjoy it tonight,” Morgan said.

Morgan’s father David has a connection to the Yankees. His father is the vice president of digital sports of Sinclair Broadcast group, which owns the YES Network.

Indians: RHP Shane Bieber (strained right shoulder) threw 57 pitches in 3 1/3 innings in a minor league rehabilitation appearance for Double-A Akron. Bieber has been on the injured list since June 14.

Yankees: LF Joey Gallo (neck tightness) was held out of the lineup. ... RHP Jamison Taillon (right ankle tendon) will throw another bullpen in a few days and that could be followed by a minor league rehab appearance. … RHP Luis Severino (Tommy John surgery on Feb. 27, 2020) could be activated Monday. … IF/OF Miguel Andújar (strained left wrist) started a rehab assignment with Triple-A Scranton/Wilkes-Barre.

Indians: RHP Triston McKenzie (5-6, 4.28 ERA) starts the opener of a doubleheader against Kansas City Monday. Cleveland did not name a starter for the nightcap.