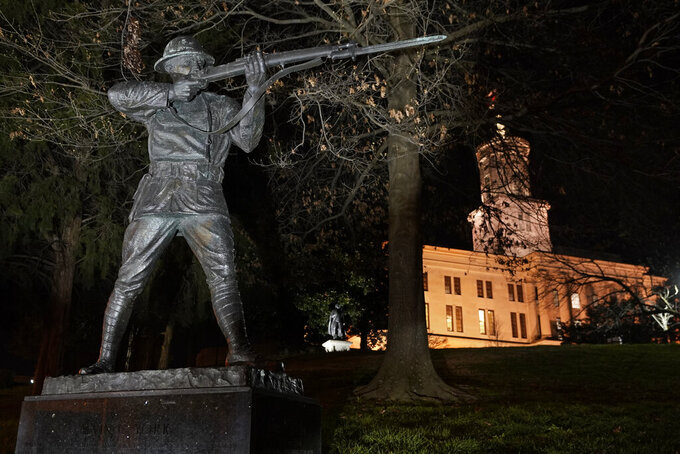 Mark Humphrey, ASSOCIATED PRESS
FILE - In this March 16, 2021 file photo, the statue of World War I hero Sgt. Alvin C. York stands on the grounds of the Tennessee State Capitol in Nashville, Tenn. University Press of Kentucky director Ashley Runyon outlined plans for the potential corrections and revisions to Sen. Doug Mastriano's book in emails Tuesday, Sept. 7, to The Associated Press and to another researcher looking into York's 1918 acts of heroism while fighting in France. (AP Photo/Mark Humphrey, File)

HARRISBURG, Pa. (AP) — The academic press that published a Pennsylvania state senator's book about World War I hero Sgt. Alvin York has asked him to review a list of factual errors and sourcing issues in the book and the press' director said Tuesday it plans to publish a corrected version early next year.

University Press of Kentucky director Ashley Runyon outlined plans for the potential corrections and revisions to Sen. Doug Mastriano's book in emails Tuesday to The Associated Press and to another researcher looking into York's 1918 acts of heroism while fighting in France.

Runyon said the press “will allow the author the opportunity to respond to the sources in question before preparing our final list of errata and corrections for a new printing. The verified sources and other corrections will also be reviewed by an outside scholar for confirmation."

She said the press does not typically ask for an outside review for reprints but was “adding this external layer of review to ensure the accuracy of any corrections in the reprint.”

Mastriano's opposition to pandemic mitigation efforts in Pennsylvania and support for former President Donald Trump's efforts to overturn his election loss last year have made him a one-man force in state politics. He has said he is considering running for Pennsylvania governor next year, when incumbent Democratic Gov. Tom Wolf is term-limited.

Researchers have questioned Mastriano’s claim that he located York’s battle site with precision, identified erroneous footnotes and raised doubts about a photo that appears on the book’s cover. Mastriano claims the government photo shows York with prisoners from the famed battle, contradicting the military photographer’s caption. The AP also identified sourcing errors in the book in a story published six months ago.

York led a small group of badly outnumbered American soldiers behind German lines to disrupt machine gunfire in the woods of northern France during the waning weeks of the war. More than 20 German soldiers were killed and 132 captured, winning York widespread fame and a Medal of Honor.

Runyon said the University Press of Kentucky sent Mastriano a list of about 30 “queries,” some confirming typos and others seeking sources to back up information in the book. He was asked to respond by the end of October, Runyon said.

Mastriano, a Republican who represents Franklin County in southcentral Pennsylvania, did not respond to messages left at his Capitol office and on his cellphone Tuesday and Wednesday.

“It feels like the integrity is coming back, hopefully this new edition next year will finally correct these issues that have been prevalent and help get the story back on track,” said James Gregory, a doctoral student in history at the University of Oklahoma who has researched the actions of other men in York's unit.

In the 2014 book “Alvin York: A New Biography of the Hero of the Argonne,” Mastriano repeatedly dismissed any notion that there is a legitimate dispute about the site where he claims this battle took place. He has claimed that “we know with certainty the location of the York action,” that it was ”discovered with 100% certainty” and that it “has been located and verified.”

Mastriano's research into York helped earn him a doctorate from the University of New Brunswick in Canada. But Gregory and others interested in York's story argue Mastriano’s research is plagued with errors — small and large — and that a walking trail to the battle location that he helped build actually takes visitors to the wrong spot.

University of New Brunswick officials involved in reviewing Mastriano's work indicated they do not discuss such matters without the consent of the student involved — in this case, Mastriano.

Runyon described the new version as a new printing to correct errors and not a new edition. She said the press has also completed a review of a second Mastriano book it published, “Thunder in the Argonne,” and does not plan to make any changes.

After Trump lost his reelection bid, Mastriano began seeking to have the results reversed, and has recently clashed with the top-ranking state Senate Republican over Mastriano's plan to force three counties to turn over election equipment and records for review by the Senate.