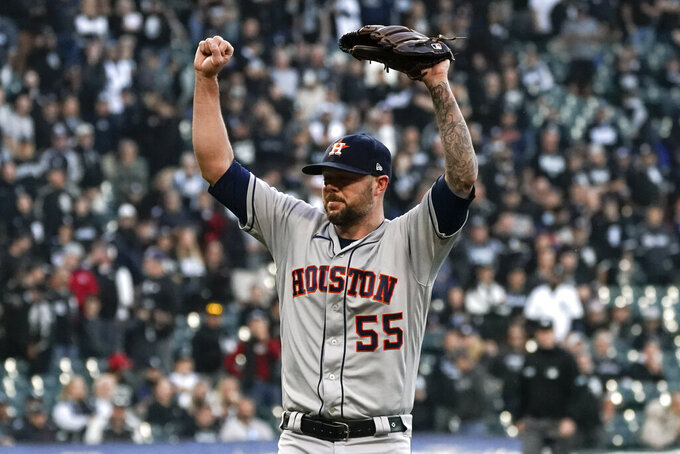 A capsule look at the best-of-seven American League Championship Series between the Boston Red Sox and Houston Astros:

October Glance: Red Sox are back in playoffs for first time since winning 2018 World Series. They advanced to Division Series by beating rival New York Yankees 6-2 at home in AL wild-card game behind Eovaldi. Bogaerts and Kyle Schwarber hit early homers off Gerrit Cole at Fenway Park, and Alex Verdugo had three RBIs. ... Boston then took down top-seeded and AL East champion Rays 3-1 in best-of-five ALDS, joining Minnesota Twins (1991 World Series) as only teams to clinch a postseason series with consecutive walk-off wins, according to STATS. Red Sox batted .341 with 9 homers and .915 OPS in the series. ... These teams met in 2018 ALCS, when Boston eliminated defending champion Houston 4-1 on way to title. Astros downed Red Sox 3-1 in 2017 ALDS en route to their lone World Series crown. Cora was bench coach on that Houston club before guiding Red Sox to 2018 championship. Then he was let go by Boston and suspended by MLB for 2020 season for his role in Astros' 2017 sign-stealing scandal. He was rehired by Red Sox last offseason. ... Boston finished fifth in AL East without Cora during pandemic-shortened 2020 season, making this the third time team has rebounded from a last-place finish to make the postseason. ... It is the first wild-card berth for the Red Sox since 2009, before current one-game playoff was instituted in 2012. ... Swept at home by Yankees from Sept. 24-26 to fall into third place but swept the Nationals in final three games of season to clinch top wild card. ... Scored 334 of their 829 runs with two outs, most in majors. ... Led the big leagues with 330 doubles. ... Six players had at least 20 homers, including Bobby Dalbec (25) and Kiké Hernandez (20). ... Martinez was left off wild-card roster following freak injury at Washington in season finale, when he stumbled over second base while jogging out to his position in right field between innings and twisted his ankle. But he returned in ALDS and went 7 for 15 (.467) with a clutch homer and 4 RBIs ... Hernandez is hitting .435 (10 for 23) in playoffs with 2 HRs, 3 doubles and 6 RBIs. ... Eovaldi pitched 6 scoreless innings in his last regular-season start, against Baltimore on Sept. 29. He's struck out 16 over 10 1/3 innings in two playoff outings, allowing three runs and seven hits with one walk. Boston has won nine of his past 10 starts, including postseason. ... Eovaldi led all AL qualified pitchers during regular season with 1.79 walks per nine innings, ranked second with 5.57 K/BB and seventh with 195 strikeouts. ... Sale has struggled of late and lasted only one inning in Game 2 at Tampa Bay, giving up five runs and four hits on 30 pitches. ... Boston is 15-3 in potential postseason clinchers since 2004 and has won its last eight.

October Glance: Heavy-hitting Astros are third team in baseball history to reach five straight League Championship Series. Looking to return to World Series for second time in three seasons and earn second championship overall, after 2017 crown was tainted by electronic cheating scheme. ... Even without injured ace Justin Verlander and 2017 World Series MVP George Springer, who left for Toronto as a free agent last offseason, Houston won AL West for fourth time in five years — finished second to Oakland during pandemic-shortened 2020 season. Playoff-tested Astros then dispatched AL Central champion White Sox 3-1 in Division Series with impressive display of clutch hitting. Tucker had 2 homers and 7 RBIs in series. ... Houston took three of four from Boston at home in series that ended June 3, then won two of three at Fenway Park from June 8-10. Astros outscored Red Sox 42-25 and compiled .884 OPS to .612 for Boston. Houston had 3.05 ERA to 6.00 for Red Sox. ... Astros are a little banged-up coming into series. McCullers, the team's top starter, allowed one earned run over 10 2/3 innings in two ALDS starts against White Sox. But he exited Game 4 with right forearm tightness after four effective innings. If he can’t pitch in ALCS, it would be a big blow. ... Rookie CF Jake Meyers also got hurt in Game 4 when he crashed into wall trying to make leaping grab. He departed with left shoulder discomfort and was replaced by Chas McCormick. ... The 72-year-old Baker is the first manager to win division titles with five teams after also leading the Nationals, Reds, Cubs and Giants to crowns. This is his eighth division championship and 11th trip to playoffs. He's still seeking first World Series title as a manager. ... Houston’s longest winning streak this season was 11 games from June 13-24. ... Led majors with a .276 batting average, .339 OBP, 863 runs and 1,496 hits. Ranked second in majors by striking out just 1,222 times. ... 3B Alex Bregman returned Aug. 25 after missing more than two months with quadriceps injury. He hit .270 with 12 homers and 55 RBIs in 91 games. ... Pitching staff was fourth in AL with 3.76 ERA. ... Greinke, who returned from injured list on last day of regular season, worked in relief against White Sox. The 37-year-old right-hander, who won 2009 AL Cy Young Award, also threw 2 1/3 innings of relief in regular-season finale for his first appearance out of bullpen since 2007. ... Correa, a free agent this fall, had one of his best seasons and led all position players with 7.2 WAR. His 2.9 defensive WAR also ranked first.