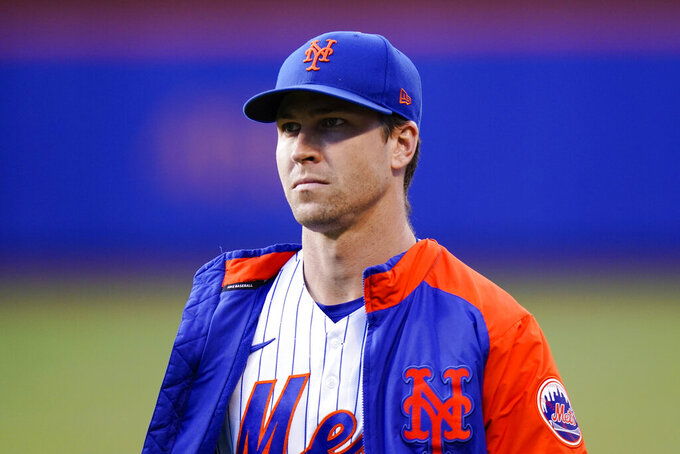 NEW YORK (AP) — The New York Mets relaxed after a night of worry: a scan of ace Jacob deGrom's shoulder showed no abnormalities.

DeGrom left his second straight start with an arm injury, coming out after three perfect innings against the Chicago Cubs on Wednesday night with right shoulder soreness. He had an MRI on Thursday at the Hospital for Special Surgery that was reviewed by Mets medical director David Altchek and Los Angeles Dodgers head team physician Dr. Neal ElAttrache.

“We had an MRI taken on him and ran it through two doctors just to have a second opinion, as well, and both doctors had the same prognosis from the imaging. So it just shows as a normal shoulder that a pitcher would have and there’s no concern,” Mets manager Luis Rojas said.

Rojas said deGrom played catch Thursday. Still, the NL East leaders aren't yet ready to commit to him taking his next turn in the rotation.

“We’re just going to take it day by day,” Rojas said. “We’re not thinking of an IL stint or to do anything.”

DeGrom left his June 11 outing against San Diego after six innings because of flexor tendinitis in his right arm. The two-time NL Cy Young Award skipped an outing between April 28 and May 9 due to discomfort in his right lat muscle, then did not pitch against until May 25 while spending time on the injured list with what the Mets said was tightness in his right side.

New York's medical staff concluded the injuries are not related.

“This is not the same thing. It's been three different things,” Rojas said. “They're not connected. One thing is not leading to the other.”

Rojas said there is a chance batting is causing the issues for deGrom, who hits left-handed.

“There’s different things that you can think where this might happen. It could be during his at-bat. It could be maybe one pitch that he felt something," Rojas said. "It could be anywhere. And I think we had the same conversation when he had the lat that was eventually his lower back, as well, that it could have been in any one of his at-bats, in one of the swings.”

A good hitter for a pitcher, deGrom is batting .423 with six RBIs this season. Rojas said the Mets have told some pitchers in the past not to swing to prevent injuries.

“They just statue there for a couple of at-bats because we only wanted them pitching, right, and we didn’t want anything like that to compromise their health,” he said.

Rojas said deGrom “is less open this time” to going to the IL now than he was last month.

“He felt that his mechanics were out of whack and he didn't want to test that lat, lower back area and see how he was landing," Rojas said. “We did the IL stint because he wanted to go through his in-between start routine at least twice just to check on those mechanics and compare them to how he’s done them in the past.”

DeGrom is averaging a 99.2 mph with his fastball, the highest among qualified pitchers and well ahead of Miami's Sandy Alcantara, who is second at 97.8 mph.

DeGrom has thrown 65 pitches of 100 mph in first innings since the start of the 2020 season, according to MLB Statcast. Miami's Sixto Sánchez is second with eight.

Rojas said the pain could be correlated to the high velocity.

“There’s a lot of studying from a medical standpoint in this game about high velo, there’s a correlation there, high velo and some stress and soreness and high injury risk” Rojas said. “And our medical group here, they’ve done a lot of presentations in the past to us as a coaching staff and everyone else here, as well, I think. It could be.”