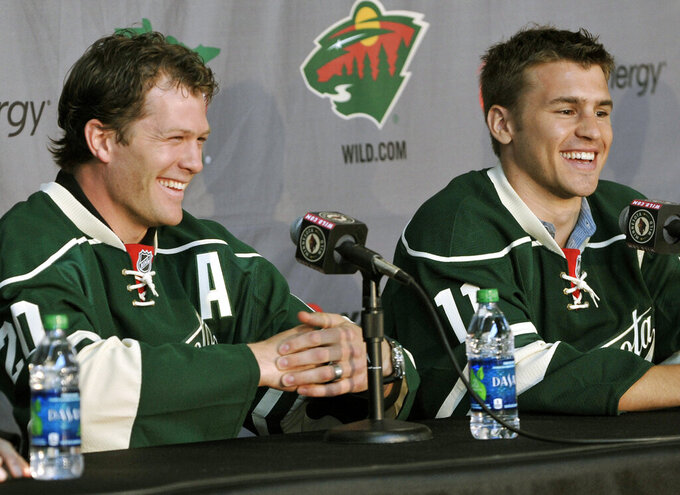 Jim Mone, ASSOCIATED PRESS
FILE - In this July 9, 2012, file photo, Minnesota Wild NHL hockey players Ryan Suter, left, and Zach Parise are introduced during a news conference in St. Paul, Minn. After signing with Minnesota together, Zach Parise and Ryan Suter are being bought out together. The Wild announced Tuesday, July 13, 2021, that the team is buying out the final four years of each player's contract, a stunning move early in the NHL offseason. (AP Photo/Jim Mone, File)

There was a method to the Seattle Kraken’s approach to preserve salary cap space while making their expansion draft selections.

After laying in wait, the Kraken made one of the biggest splashes in free agency by signing goalie Philipp Grubauer to a six-year, $35.4 million contract Wednesday. Seattle’s roster is suddenly beginning to take form with the addition of one of the top players on the market.

The 29-year-old Grubauer, who finished second in the NHL with 30 wins and third in Vezina Trophy voting in his third season with Colorado, represents a significant upgrade over the three goalies the Kraken plucked off 30 teams’ rosters.

“I think any GM will tell you if you’ve got a goaltender that has that experience you sleep a lot better at night," Seattle general manager Ron Francis said. "I don’t know if going into this we thought we would get somebody like him.”

Grubauer's signing also dealt a blow to the Presidents’ Trophy-winning Avalanche, who had difficulty squeezing him under their salary cap after re-signing captain Gabriel Landeskog a day earlier.

“He was the backbone of our team and a huge part of our success this past season,” Landeskog said after signing an eight-year, $56 million extension. “But at the end of the day I’m not going to tell Grubi what to do."

The Avalanche filled their net void by acquiring Darcy Kuemper from Arizona.

Seattle also added forwards Jaden Schwartz on a $27.5 million, five-year contract and Alexander Wennberg on a three-year deal worth $13.5 million.

“We got him,” the Devils said in a message posted on their Twitter account to announce the move.

At the other end of the cap spectrum, the much-anticipated breakup of the two-time defending Stanley Cup champion Tampa Bay Lightning continued.

Forward Blake Coleman left to sign a six-year, $29.4 million deal with Calgary. And defenseman David Savard signed a four-year, $14 million contract with Montreal — the team the Lightning defeated in the Stanley Cup Final three weeks ago.

“We all knew it was going to happen,” Savard said about the Lightning’s breakup. “I think everybody in that dressing room knew a lot of guys were going to be leaving this summer, so I know it’s going to be a different team next year. But it was fun. Knowing everybody was going to leave after that run, we made it so special.”

Savard immediately fills the hole left on the Canadiens’ blue line with captain Shea Weber’s career uncertain due to a series of injuries.

Tampa Bay did shore up its long-term future by extending No. 1 center Brayden Point eight years through 2030 for $76 million. The Lightning made a handful of other moves, including bringing back 2020 Cup-winning defenseman Zach Bogosian on a three-year deal, forward Pierre-Edouard Bellemare on a $2 million, two-year contract and adding Brian Elliott as a new backup goalie.

“I always knew in the back of my mind that I probably always wanted to play for Tampa again,” Bogosian said.

A flat salary cap — staying at $81.5 million for a third consecutive season as a result of the coronavirus pandemic — didn’t stop teams from transforming their rosters. It just required teams had to be more creative in clearing space in the days leading up to free agency before completing a combined 60 signings worth a whopping $405 million in the first two hours Wednesday.

“We’re seeing more and more trades where teams are attaching assets to players to move the money, or taking back dead cap space,” said Flyers GM Chuck Fletcher, who spent much of the past two weeks transforming his defense by acquiring Matt Ellis and Rasmus Ristolainen in trades.

Before signing Hamilton, New Jersey freed up additional cap space by trading underperforming defenseman Will Butcher, who has one year left on a three-year, $11.2 million contract, to Buffalo for future considerations.

A much bigger priority for Carolina was addressing its goaltending needs by agreeing with former Maple Leafs starter Frederik Andersen on a two-year, $9 million contract and Antti Raanta on a two-year, $4 million contract. The Hurricanes also defended their decision to sign defenseman Tony DeAngelo, whom the Rangers paid to go away last season after his latest troubling incident.

Ryan Suter became the first player to sign a new contract when free agency began, joining the Stars on a $14.6 million, four-year deal. Dallas also signed 2016 Vezina Trophy-winning goaltender Braden Holtby for $2 million for next season after he was bought out by Vancouver.

The Canadiens lost defensive-checking center Phillip Danault after he signed a six-year, $33 million deal with the Los Angeles Kings.

The more notable players on the market include New York Islanders winger Kyle Palmieri and center Zach Parise, who was also bought out by the Wild.

As for the trade market, the Sabres continue to shop disgruntled captain Jack Eichel, who has five years left on an eight-year, $80 million salary. They failed in their bid to re-sign goalie Linus Ullmark, who left to sign a four-year, $20 million contract with Boston, which also added Nick Foligno for $7.6 million over two yeras.

Among the other moves around the league, Vegas re-signed defenseman Alec Martinez for $15.75 million over three years, Anaheim re-signed captain Ryan Getzlaf to a one-year deal and the goalie carousel continued spinning.