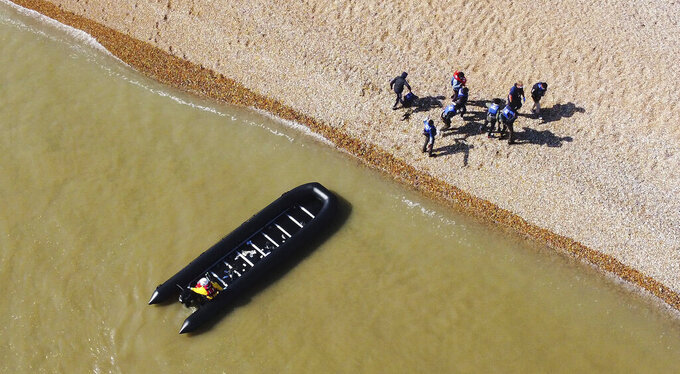 Gareth Fuller, ASSOCIATED PRESS
A group of people thought to be migrants are escorted to shore in Kingsdown, after being intercepted by an RNLI crew following a small boat incident in the Channel, in Kent, England, Tuesday, Sept. 7, 2021. (Gareth Fuller/PA via AP)

LONDON (AP) — Britain and France traded barbs Thursday over what to do about a growing number of migrants trying to cross the English Channel in small boats.

After the British government briefed British newspapers that U.K. Border Force vessels could intercept boats and send them back to French waters, French Interior Minister Gerald Darmanin said France would “not accept any practice contrary to the law of the sea.”

Migrants have long used northern France as a launching point to reach Britain, either by stowing away in trucks or on ferries, or — increasingly since the coronavirus pandemic disrupted international travel — in dinghies and other small boats organized by smugglers. The British and French governments have worked for years to stop the journeys, without much success.

More than 14,000 people have made the crossing this year, according to a count by Britain’s Press Association news agency. In 2020, about 8,500 people made the journey, and several died in the attempt.

Earlier this year, Britain agreed to give France 54 million pounds ($74 million) to help fund a doubling of the number of police patrolling French beaches.

Britain has not yet paid the promised money, and Home Secretary Priti Patel has suggested she could withhold it if France does not do more to stop the people-smuggling boats from departing.

Darmanin, who held talks with Patel on Wednesday, appeared to refer to that threat when he tweeted that France would not accept “financial blackmail.”

“The friendship between our two countries deserves better than postures that damage cooperation between our services,” he wrote.

Opposition politicians and refugee groups in Britain say turning back boats in the Channel would be impractical, dangerous and illegal.

Tony Smith, a former head of Britain’s Border Force, said trying to force back overloaded and often unseaworthy boats would be “highly dangerous.”

“The top priority in my book, under the UN Convention of the Law of the Sea, is the preservation of life above all else, and so both the French and the British should be committed to that, and making sure that nobody dies,” he said.