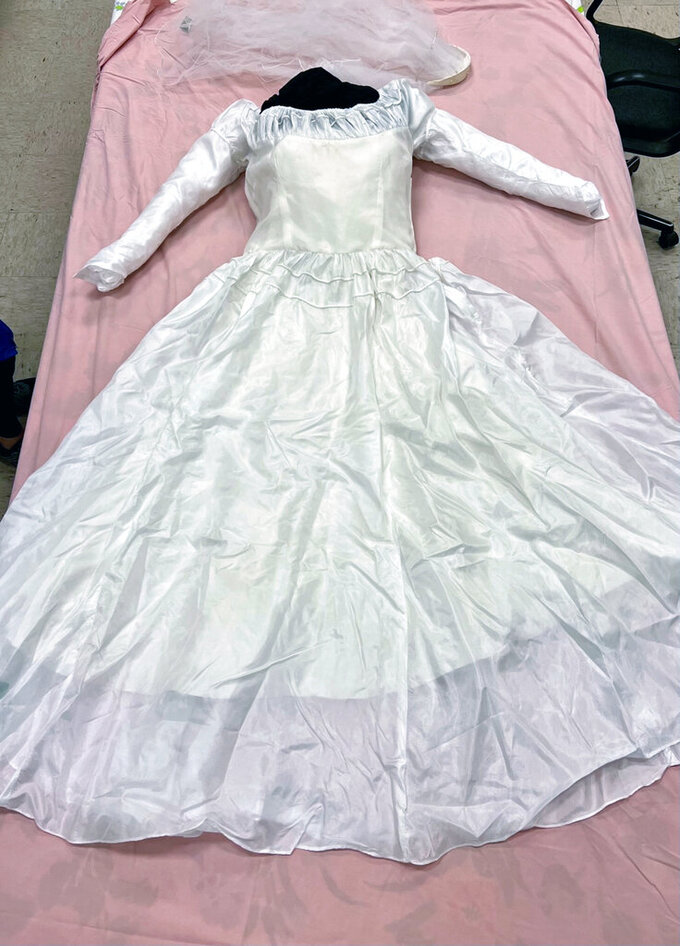 Craig Massey, ASSOCIATED PRESS
This March 11, 2022, photo provided by the New Mexico Farm & Ranch Heritage Museum shows a wedding dress made from a WWII surplus parachute that is now part of the museum's collection in Las Cruces, N.M. The dress was first worn by Anna Beth "Ann" Ewing of Lordsburg in 1947 for her marriage to Baylus Cade Jr. of Las Cruces. The Cade Family recently donated the dress to the museum. (Craig Massey/New Mexico Farm & Ranch Heritage Museum via AP)

LAS CRUCES, N.M. (AP) — When Hazel Ewing made her daughter a wedding dress in the 1940s, she likely wasn’t thinking it would one day end up on display in a museum.

Breezy Cade explained that his parents, Anna Beth “Ann” and Baylus Cade Jr. were married in 1947 in Lordsburg. Ann grew up on a remote ranch south of Lordsburg and Baylus was from Las Cruces. The two met while attending New Mexico State University. Baylus was a singer and acted in productions while Ann played piano accompaniment.

Baylus eventually asked Ann to marry him at El Patio in Mesilla, which was a restaurant at the time.

When they decided to get married, Ann’s mother, Hazel, got to work on the dress. Breezy said his mother’s family did not have a lot of money. They were ranchers who largely lived hand to mouth. However, WWII had recently ended, and surplus military supplies were available for purchase. Hazel bought an unused white silk parachute, chose a pattern and made her daughter’s dress at home on a Singer treadle sewing machine.

“It was a nice dress. It was simple, but it was nice,” Breezy said. “They got married at a little church in Lordsburg, so it was kind of a country wedding so there was no big hoopla about the whole thing.”

A news release from the museum explained that limited resources were common during WWII and in the following years. Fabric was also expensive. Women improvising with parachute silk or nylon for their wedding dresses became popular.

The Cades married in September 1947 when Ann was 22 and Baylus was 28. They had four children — Breezy, Beverly, Helen and Patrick. The dress was packed away and stored until it was handed down to Beverly.

The couple spent their lives in Las Cruces. Ann had lupus and passed away in 1970. Baylus, who worked as an accountant, died in 1984. The dress remained in storage until the 1990s, after Beverly passed. Breezy said his sister’s husband distributed her belongings back to the family and the wedding dress was sent to Helen.

In 1997, Breezy’s daughter, Mariah, chose to wear her grandmother’s dress for her own ceremony. It had worn some over the years and needed a bit of sprucing up so the before the wedding, the fabric was restored and alterations were made. After the ceremony, the dress was professionally sealed and returned to storage.

Breezy said the family didn’t think any other children or grandchildren would want to wear the dress so they looked for other options than just keeping it in a box.

“It’s old fashioned and we didn’t think anybody was going to want to use it again. So, we talked it over and decided to see if the museum was interested in it,” Breezy said. “We’re really happy that it’s going to be taken care of properly and that other people can see it. And see how people did stuff on ranches back in the day.”

“But to top that off, the history of the dress, made from a World War II parachute on a ranch in New Mexico. What a great story,” she said.

Ann Cade’s wedding dress will now be stored in the museum’s Collection’s Room, which features over 11,000 historical items.